Lampre-Merida used disc brakes at the Tour of Flanders yesterday, the first WorldTour team to make a complete switch to disc brakes for a race of such significance as this cobbled classic.

The new Merida Scultura Disc that the team raced isn’t the best-kept secret; the team was spotted training on the new bike before the race and we've noted the addition of the new model on the UCI’s regularly updated approved frames and forks list. 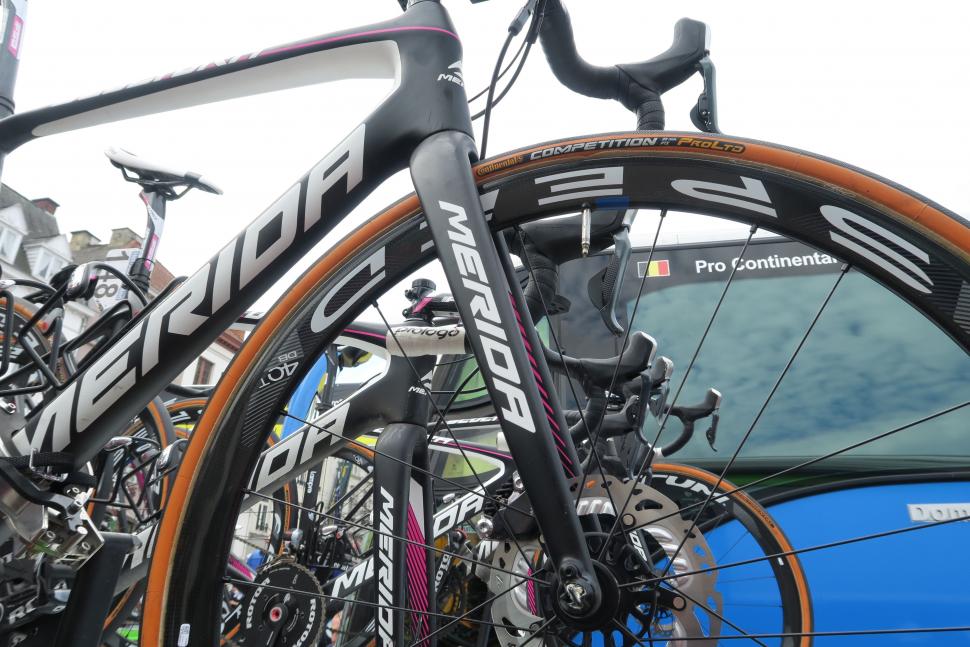 Merida hasn’t provided any details about the new bike yet, so we’re instead left to speculate. From our closer inspection, we can see that the new bike has thru-axles, flat mount caliper mounts, internal hose routing and clearance for up to 28mm tyres. 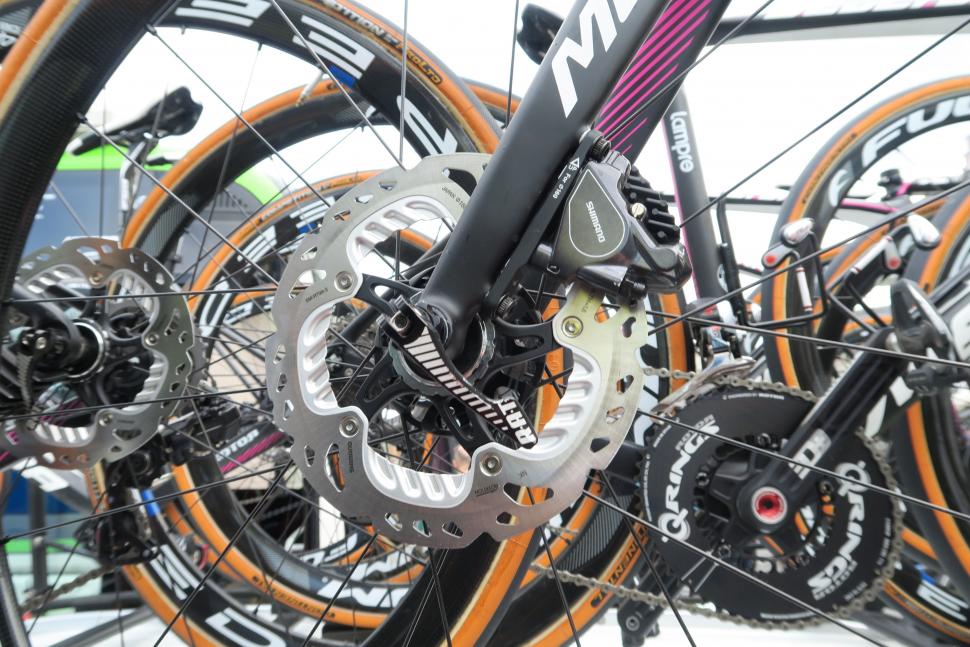 Merida has adopted the Rapid Axle Technology (RAT) developed by German bike brand Focus. It’s a really simple solution and is much easier to use, based on my own testing of the Focus Izalco Max Disc, than regular quick releases and other more commonly used thru-axles. 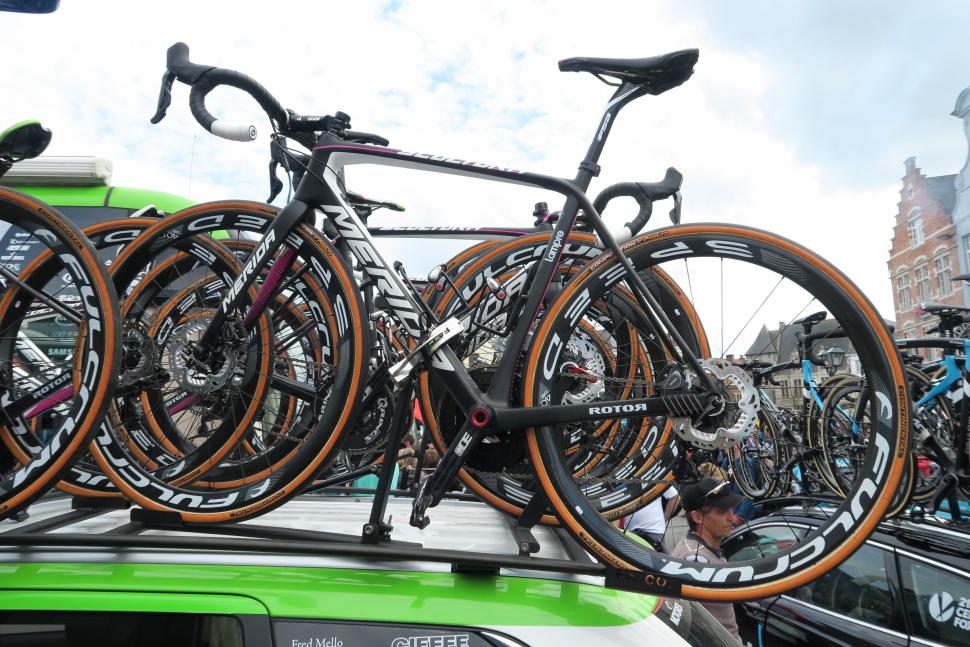 We can’t determine the diameter of the axles. The rear will be a 142x12mm setup, but the front is either 12 or 15mm. It seems like the UCI could be pushing for a 12mm front and rear standard, and that’s something we’ve heard from a few sources. It’s a bit lighter than the 15mm design that has been borrowed from the mountain bike world. 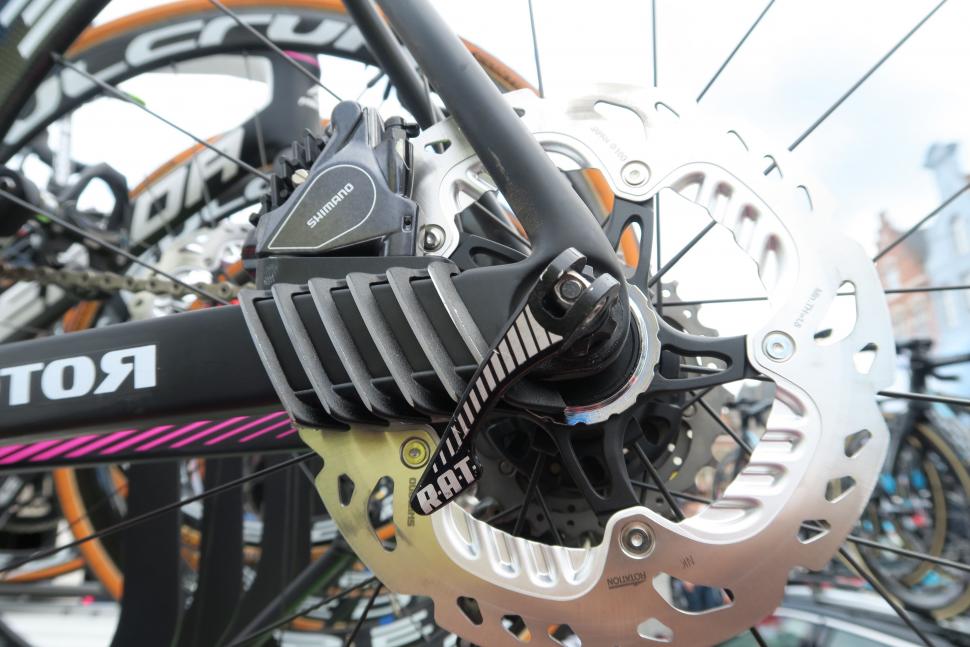 The bikes are equipped with Shimano Dura-Ace Di2 groupsets with Rotor chainsets, and BR-RS805 flat mount hydraulic calipers. The team has chosen 160mm disc rotors, which is the size carried by neutral race service. 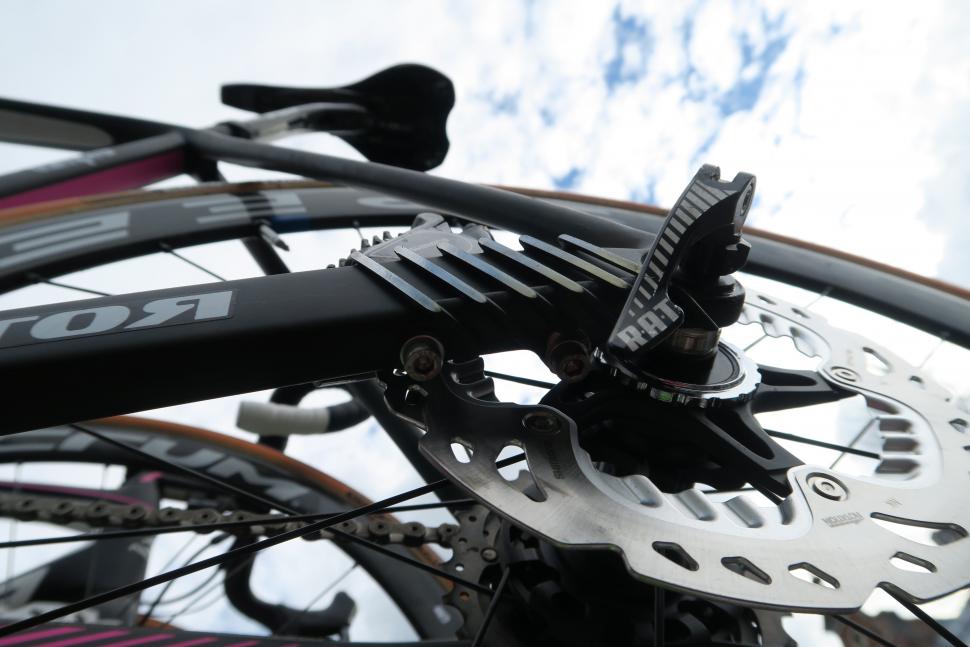 The really eye-catching part of the bike is the rear disc brake fixing. It’s a flat mount caliper but Merida has designed a metal bracket that wraps around the chainstay. It could be aimed at providing a more solid platform for the brake caliper to deal with the forces generated by the discs. We’ll find out when Merida releases details of the new bike. 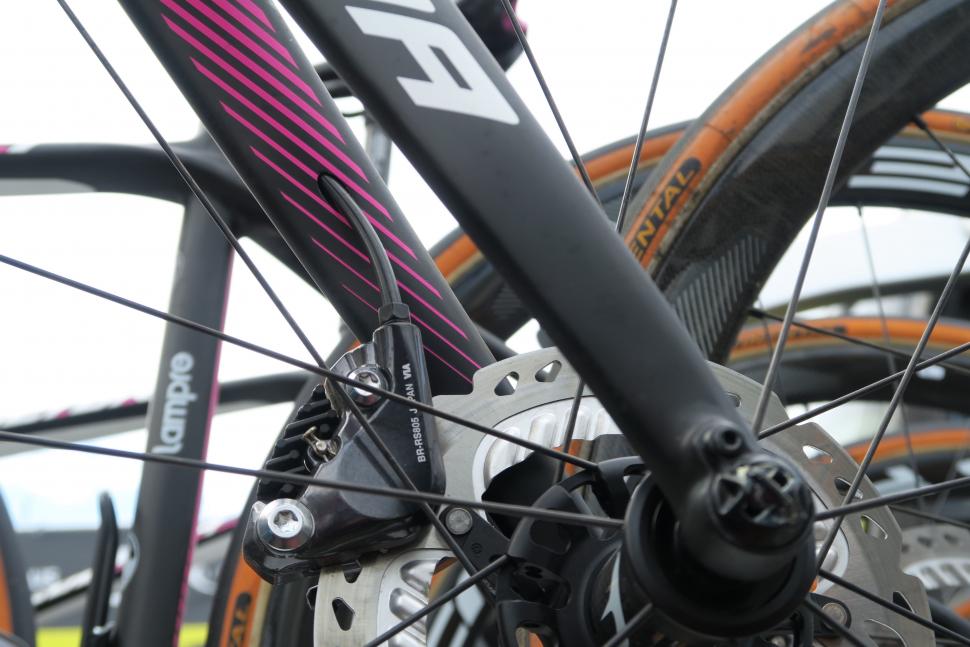 We doubt it’s a heat sink, as one bystander suggested to me. It reminds me of the novel disc brake mount on the Marin Gestalt, developed by US firm Naild. That was essentially a heat sink integrated into the caliper mount, but we don't think that is what Merida is trying to do here - because why wouldn't it do the same to the front brake as well? 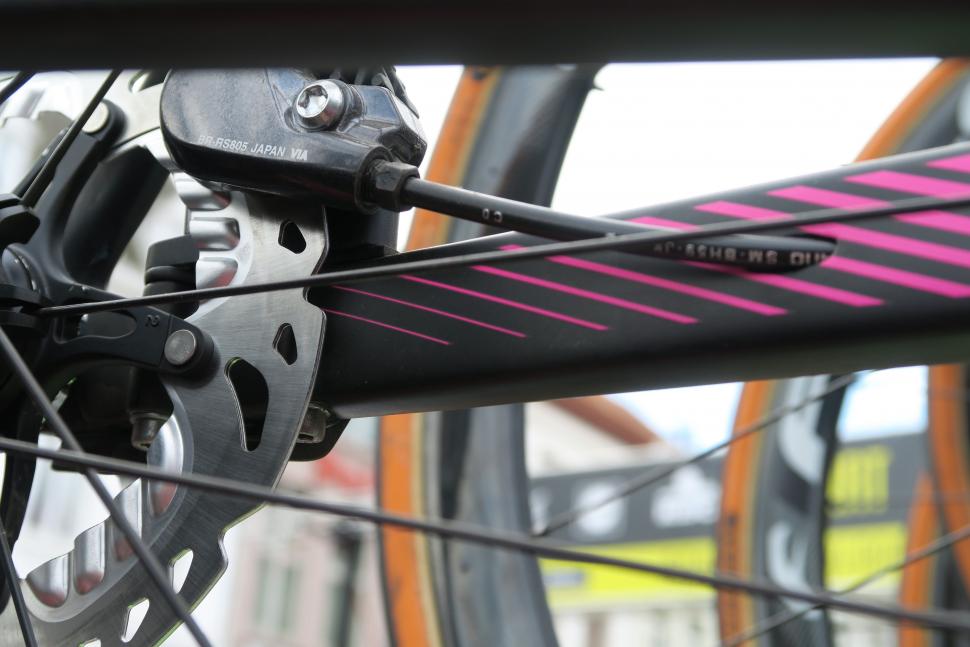 The front caliper is fixed to the fork with the necessary adapter - flat mount natively supports 140mm rotors, but an adapter is required to space out the caliper for a larger rotor.

Changes to the frame compared to the regular Scultura are to be expected. This one clearly has space for 28mm tyres, whereas 25mm tyres were a squeeze on the regular bike (which we tested earlier this year). Wider tyres are gaining a lot of popularity and even the latest race bikes are being designed to accommodate wider rubber - the Focus Izalco Max Disc is a prime example of a race bike given a disc brake overhaul and accepting 28mm tyres. 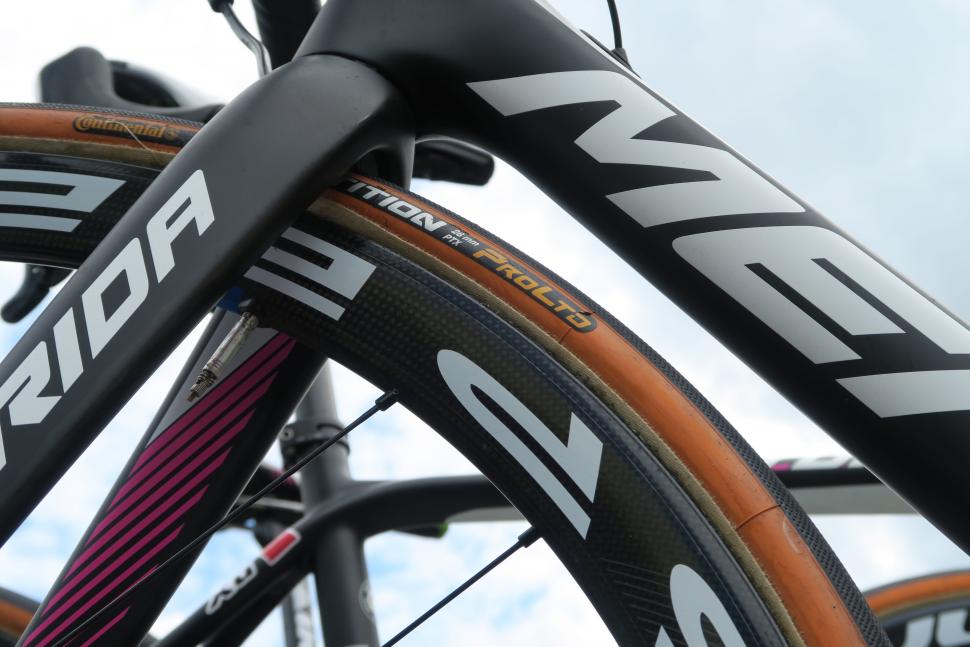 The current Scultura is a light bike, the lightest in Merida's large range. It’ll be interesting to know if the frame carries any weight penalty as a result of the modifications for disc brakes. Parts of the bike clearly look different. The fork certainly has a different shape compared to the bike we tested earlier this year while the rear triangle looks identical. 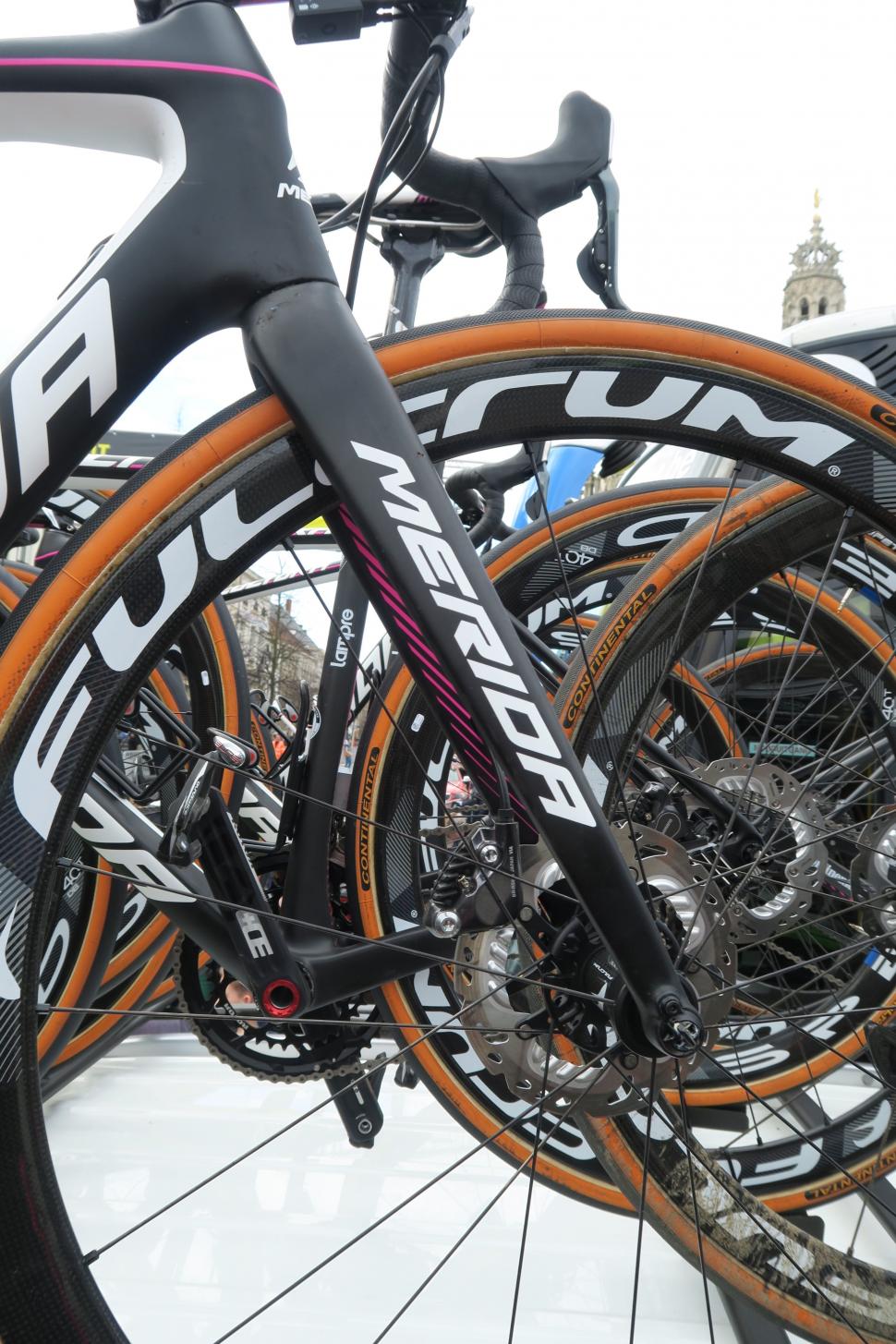 Also fitted to the bike are what appear to be a new set of Fulcrum Speed 40T carbon fibre wheels. Fulcrum offers two models of carbon fibre disc wheels, but these wheels have a tubular rim which isn't currently offered by the Italian brand.