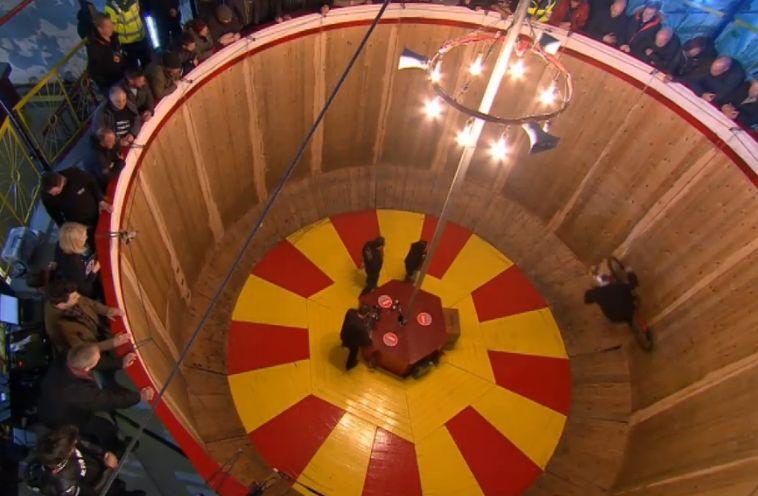 BMX star Shanaze Reade has set a new Guinness World Record after becoming the fastest person ever – male or female – to ride a bicycle around a ‘Wall of Death.’

The 27-year-old from Crewe undertook her record-breaking ride live on Channel 4 last night as part of the Guy Martin’s Wall of Death show, which focused on the Isle of Man TT rider’s own attempt on the motorbike record.

Martin’s effort was carried out on a custom-built 120 metre track in an aircraft hangar in his home county of Lincolnshire.

Reade took to a smaller, more traditional Wall of Death to set her pedal-powered speed of 26.8mph.

According to Dr Hugh Hunt of the University of Cambridge, at 20mph a cyclist riding around the vertical wooden track would “exert a force of about two and a half G at least” and therefore be able to maintain their momentum.

One of only two touring Walls of Death remaining in the UK the track, constructed from Oregon pine in 1995 and belonging to the Ken Fox Troupe, has a diameter of 9.75 metres, giving a circumference of 30.63 metres.

You can watch last night’s programme in full on 4OD, with the segment featuring Reade starting around 26 minutes in.

Afterwards, she tweeted a picture of herself and Martin – who achieved a speed of 78.15mph –  holding the certificates that prove they are the holders of the respective Guinness World Records.

Four times a world champion in BMX, Reade is best known to the wider public for her appearances in that discipline at the Beijing and London Olympics, starting as favourite on both occasions but finishing out of the medals each time.

She’s also tasted success at the highest level on the track, partnering Victoria Pendleton to world championship victories at Palma de Mallorca in 2007 and in Manchester the following year.

She returned to the boards for the 2015/16 track season with Madison Genesis and returned to training with the national team.

Reade told Telegraph.co.uk earlier this month that she is still battling for a place at the Rio Olympics, but was not selected for any of the three rounds of the Track World Cup this winter, nor for the World Championships in London.

She maintains that her longer term goal is to compete on the track at Tokyo 2020, pointing to Sir Chris Hoy, Victoria Pendleton – aged 31 at London 2012, the same age  Reade will be in four years’ time – and the Australian, Anna Meares, as track sprinters who show that her age is not a barrier.