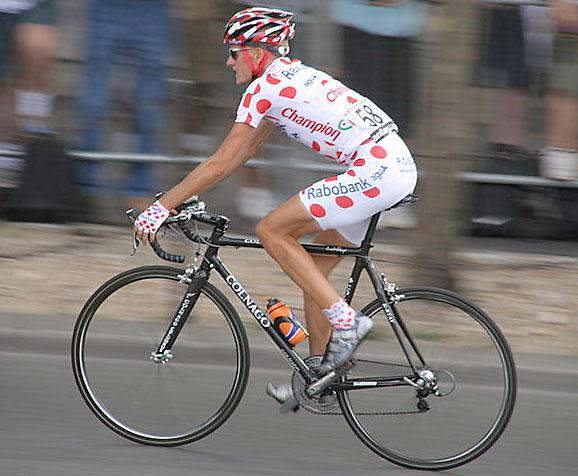 Michael Rasmussen in the 2006 TdF

Former Rabobank rider Michael Rasmussen is on target for a top-ten finish in next month’s Tour de France, according to bookies William Hill, who make the Dane 25/1 tenth favourite to top the general classification, pretty good going for a rider now competing in the third tier of the sport since his spectacular fall from grace three years ago.

Such a result would doubtless cause no small degree of consternation at the offices of organisers Amaury Sports Organisation, especially given the fact that Rasmussen hasn’t competed in the race since being kicked out of it by his Rabobank team three years ago while wearing the maillot jaune, and certainly won’t be making an appearance this year.

The Dutch ProTour outfit made its decision after it transpired that the Dane – who had been suspended from riding for his country due to a history of missed doping controls – had lied about his whereabouts in the run-up to the Tour de France, after Davide Cassani, an ex-professional cyclist who commentates for Italian broadcaster RAI, spotted him training in the Dolomites at a time when, according to his training schedule lodged with the UCI, he should have been in Mexico.

Rasmussen returned to racing last year after serving a two-year ban imposed by the Monaco cycling federation, which holds his licence, and now rides for UCI Continental team Miche-Silver Cross, which operates at the third tier of the sport, the same level as Britain’s Rapha-Condor-Sharp and Motorpoint-Marshalls Pasta. Even if he eventually managed to secure a berth at a team that competes in the Tour de France, it’s unlikely that ASO would welcome the rider back into the race with open arms.

Let’s say you’re not tempted to have a punt on Rasmussen, who else might you pick? Well, 20/1 look pretty decent odds on someone who has actually won one of cycling’s three Grand Tours over the past 12 months, and who until recently topped the UCI World Rankings. Except, perhaps, when that someone is Caisse d’Epargne’s Alejandro Valverde, who won’t be getting on his bike to ride competitively until January 2012 following his recent ban.

So, who can you have a flutter on who actually will be riding in the race? Well, in terms of outright winner, there can’t be too many sports in which the favourite in a field of 198 would be quoted by the bookies at odds-on – but that’s exactly what William Hill has done in assessing Alberto Contador’s chances of successfully defending his title, with his odds standing at 6/4 on. To be honest, it’s difficult to look beyond the Spaniard for the maillot jaune, but those still seem ridiculously short odds.

With each-way betting available, you can however bet on who is likely to join the Astana rider on the Champs-Elysées podium, and the bookies are predicting that as last year, second place will be taken by Team Saxo Bank’s Andy Schleck, quoted at 4/1, with seven-times winner Lance Armstrong of Team RadioShack, whose odds are 8/1, coming in third. Next in the running comes Team Sky’s Bradley Wiggins, predicted to repeat last year’s fourth place with a price for the overall victory of 14/1.

Outside that quartet, though, there do seem to be some better value bets around. Should he start, Giro d’Italia winner Ivan Basso of Liquigas has decent odds of 20/1, the same price as World Champion Cadel Evans, twice second in the Tour de France.

Admittedly, it’s easy to scoff – we wouldn’t profess to be experts in the world of four-legged racing in which William Hill made its name, and Valverde’s ban is recent enough that his inclusion in the original list can be forgiven, although that still doesn’t explain Rasmussen’s appearance.

But with the bookmaker saying that prices are available on request for riders other than the 36 it lists, we’re off to see what odds we can get on Floyd Landis or Eddy Merckx.