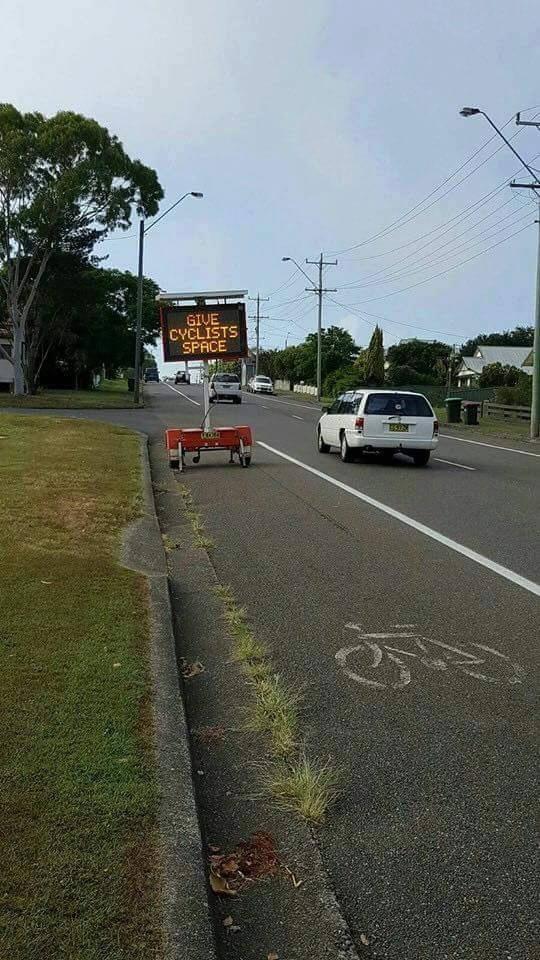 The large electronic noticeboard, designed to improve cycle safety, was left on a Sydney bike lane, forcing riders into the path of motor vehicles
by Laura Laker

Australia has scored another own goal for cycling this week as a sign reminding drivers to give cyclists space was left entirely blocking a bike lane, forcing riders to veer out into traffic to avoid it.

Matt Howell spotted the large electronic notice board yesterday on a Sydney street and shared it to Facebook page I love Sydney Bike Lanes and Cycle Ways, an account used by frustrated cyclists to bemoan a lack of cycling facilities in the city.

Howell comments: “Up there for thinking. Give cyclists space and put a sign in the middle of the bike lane lol”

The response to the ill-placed sign was a mixture of bemusement and sarcasm.

Jack Dixon commented on the picture: “This is pretty much the problem - the bike rules are made by people who don't ride bikes and have no idea of what issues people on bikes face. Still, you shouldn't ned to ride a bike to understand what's wrong with this picture."

Another wrote: “The road to hell is paved with good intentions”.

There is growing disquiet Down Under as a raft of laws are passed or proposed, aimed at penalising cyclists. Last week a motion was voted down 17-22 to reverse the increase of fines for cyclists by up to 500%.

That legislation had been brought in at the start of this month by New South Wales’ minister for roads, Duncan Gay, the man behind the removal of a Sydney bike lane - the $5m College Street cycle track - in order to make room for cars, which sparked a mass protest in the city in January.

Gay, who describes himself as "the biggest bike lane skeptic in goverment", floated a law, which came into force this month, requiring Sydney cyclists to carry ID at all times. A minimum safe passing distance for motor vehicles overtaking cyclists of 1m was introduced at the same time.

Novices. Our transport authority pays to RIP UP bike lanes. Come to a real car city. Drive right into the 1950's https://t.co/BCHKfBfCSO

It is understood the sign has since been removed.