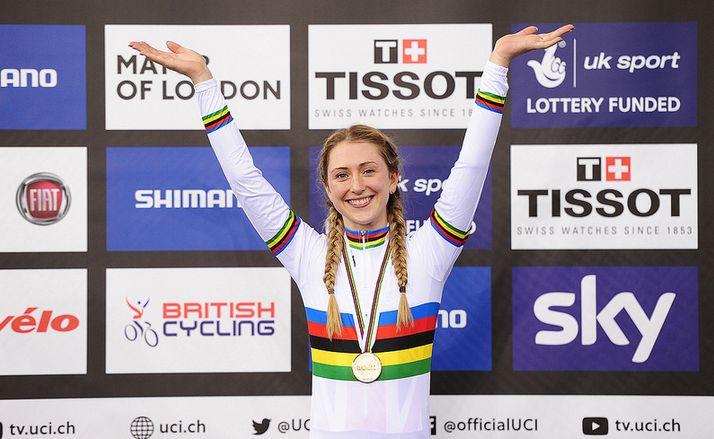 Laura Trott put in a stunning final few laps in the scratch race at the UCI Track World Championships in London last night to power to the sixth rainbow jersey of her career. It was one of three medals for Great Britain yesterday evening with Becky James, back from injury, taking bronze in the keirin, while the men’s team pursuit squad finished runners-up to Australia after a close fought race.

Winnner of two gold medals at London 2012 at what is now the Lee Valley VeloPark, with just four laps remaining of the 10 kilometre race, Trott was in the second group of riders on the track and chasing hard to bridge across to the six in front.

They were caught with less than two laps remaining and with a capacity crowd on its feet Trott, who had seemed out of contention just a couple of minutes earlier, powered through on the outside of the final bend to take the sixth rainbow jersey of her career.

"When I was in the race I wasn't feeling that good," she said afterwards to the BBC, which has a video of those final laps. "But it worked out perfectly for me. I'm so happy. I let everybody get on with it and raced my own race."

Great Britain’s second medal of the evening came courtesy of James, continuing her comeback after struggling with injury since becoming sprint and keirin world champion in 2016. She had made the second round only via the repechage, but in the final took bronze behind Germany’s Kristina Vogel, successfully defending her title, and Australia’s Anna Meares.

“It just doesn't feel real, I'm just over the moon to be back," reflected James afterwards. "I've seen improvements week in week out and managed to pull it out today."

Sir Bradley Wiggins and the rest of the team pursuit squad pushed Australia desperately close but had to settle for the silver medal following a thrilling race that saw the host nation ride hard to close down the gap and get in front of their rivals for the first time as they entered the last of the sixteen laps.

The chase had come at a price, however, and with half a lap remaining and already down to three riders, Great Britain lost another off the back, and with it their advantage over the Australians who snatched a dramatic win, just outside World Record time.

The race featured an immense performance from Ed Clancy, just returned from a career threatening back injury, and Wiggins said afterwards: "I'll put my house on it, I'll say we'll win in Rio now. I'm confident and I just think we will.

"Look at our efforts individually from Christmas to where we are now. We've come on leaps and bounds and I think we'll move on again for Rio."

You can see highlights of all of those races on the BBC Sport website here.