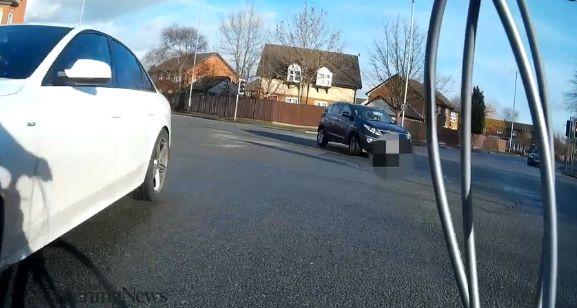 Video: Driver "swerves to avoid cyclist" - what do you think?

Was a driver “forced” to move across to the wrong side of the road to avoid hitting a cyclist? That’s the angle the Manchester Evening News seems to take in its commentary on a video the rider shared with the newspaper – we're not sure many cyclists would see it like that, what do you think?

Shot last month in Whalley Range, Greater Manchester, the newspaper says the “shocking” footage shows how the motorist “only narrowly avoids hitting a cyclist by swerving onto the wrong side of the road.”

It describes how the white Audi passes through a set of traffic lights and “accelerates towards the cyclist,” and that “the driver is forced to pull onto the wrong side of the road to avoid a potentially fatal collision.”

There’s no mention of the fact the driver is overtaking, at speed, another vehicle at the junction in question.

“As the Audi passed it was inches from me,” said the cyclist, 64-year-old Karel Hladky from Fallowfield.

“I came up to the junction and was going to turn right so got in the right position. But then I saw the Audi coming towards me – it was either racing the black car or it was trying to overtake it.

“It could have been so much worse, there wasn’t enough time to move over so I just stayed still and tried to remain calm. And if there had been a car next to me then the Audi would have smashed into it. He must have been going about 60 miles per hour.”

However, the cyclist says he won’t be going to police with the footage.

“I see this sort of thing on the roads all too often unfortunately,” he explained. “It is not the first time someone has nearly gone into me while I have been on my bike.

“To be fair to the driver seemed in control when he turned the corner – he made the decision to avoid me by pulling into the wrong lane. I saw his face as he went past and he looked pretty calm.

“But in control or not, what he did was very dangerous.”

What do you think? Was the driver “forced” to take evasive action, or had he created a danger to other road users through his own driving? Let us know in the comments below.