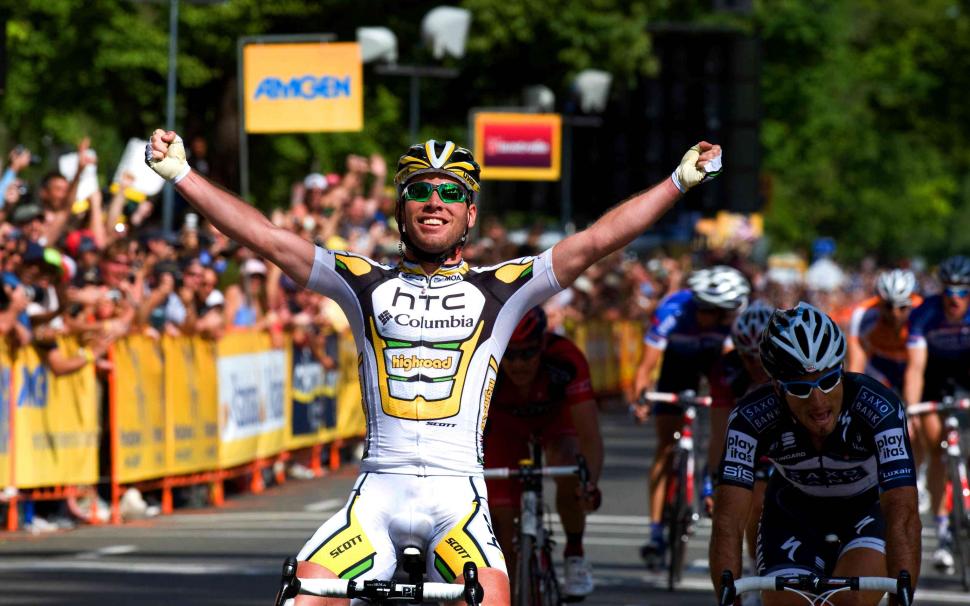 Tour of California Stage 1: Cav lets his bike do the talking as he takes sprint

Mark Cavendish claimed his third win of 2010 yesterday in the opening stage of the Amgen Tour of California, holding off Juan Jose Haedo of Team Saxo Bank to take the sprint in Sacramento – and ominously for the Manx Missile’s Tour de France rivals, he seems to be getting back to his best following his early season woes.

The HTC-Columbia train was also in fine form as it controlled the front of the race to send its star sprinter into the race leader’s jersey, and this time Cavendish, recently pulled from the Tour de Romandie by his team after controversially giving the V sign to his critics as he crossed the line for a stage win, let his bike do the talking.

As Cavendish and Haedo locked horns in the dash for the line, however, drama was unfolding behind them on the Californian state capital’s wide, tree-lined streets as a crash on the final corner took out a number of riders towards the front of the field, including Quick Step's Tom Boonen, who appeared bloodied and bruised after remounting to cross the line and complete the stage.

The 167.8 km mainly downhill stage began in Nevada City, coinciding with the 50th anniversary of the Nevada City Classic, with a four-man break including Maarten Tjallingii of Rabobank and Chad Beyer of BMC Racing getting away early on which the peloton, relaxed with riders chatting happily away to each other, was happy to let remain ahead until with downtown Sacramento’s skyscrapers looming on the horizon, it was swallowed up as the race entered its closing 20 kilometres.

Defending champion Levi Leipheimer of Team RadioShack can count on the support of Lance Armstrong as he seeks to defend his title, in a star-studded field that as well as Cavendish and Boonen includes the likes of the Team Saxo Bank pairing of Andy Schleck and Fabian Cancellara.

The presence of so many big names vindicates the organisers’ decision to move the race back in the calendar to May this year, meaning that a number of riders, particularly those from the US, have chosen to use the week-long event, rather than the three-week Giro d’Italia, as part of their build-up to the Tour of France.

Meanwhile, in a bid to avoid a repetition of last year’s theft of Lance Armstrong’s Trek Equinox TTX 9.9 time trial bike in Sacramento last year, organisers stepped up security measures ahead of the start, including a round-the-clock guard on the trailer containing the Texan’s bike.

Today’s Stage 2 covers the 176.2km from Davis to Santa Rosa, and comprehensive coverage, including video, can be found on the Tour Tracker section of the Amgen Tour of California website. The stage will also be shown on British Eurosport 1 tonight, starting at 9.25pm.