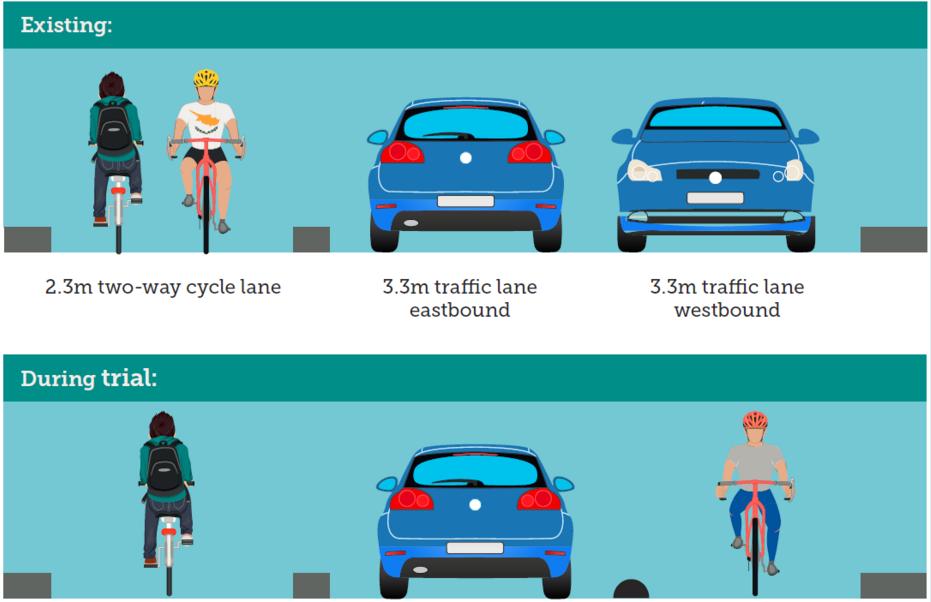 A campaign for businesses to support a 12 month trial to double capacity of a popular bike route in central London was launched this week amid stiff opposition from the local taxi trade.

Work to install temporary bike lanes along Torrington Place and Tavistock Place - Camden’s most popular bike route was completed on 23 November, replacing one lane of motor traffic with a bike lane, separated from traffic by "Orca" rubber blocks, and making the route one-way for motor traffic.

Campaigners behind the website, Safer Bloomsbury, ask businesses to show their support for the scheme, pointing out evidence shows pedestrians and cyclists spend more in local retailers than drivers do. Camden Council says if people want schemes like this they need to make their voices heard, as taxi drivers are vociferously opposed to the scheme, which they say is causing gridlock on surrounding streets.

George Coulouris, of Camden Cycling Campaign, says “Although Camden Council are receiving a lot of support and compliments on the Tavistock scheme from the cycling community and from pedestrians who like the greater safety, lower pollution and general feel of the area, Camden tell us they are also receiving a lot of protests from the taxi trade and others about the loss of road space for motors.

“Camden Cyclists have therefore decided to launch this counterbalancing campaign in collaboration with local members of Living Streets.”

Based on the Cycling Works campaign, set up for businesses to show support for London’s controversial East-West cycle superhighway, Safer Bloomsbury is asking people to persuade employers to support the scheme.

According to Camden Council the Torrington Place/Tavistock Place route sees 1009 cyclists during the morning peak hour and 880 in the afternoon peak, and the two-way cycle track, built in the 1990s and one of the first of its kind in the UK, was no longer able to cope with the numbers of cyclists.

The Council says before changes the route had a poor collision record, especially between motor vehicles and cyclists, and motor vehicles and pedestrians. In the three years to November 2014 there were five serious cycling injuries and 21 slight cycling injuries on the route. Pedestrians also found the previous two-way cycle route difficult and confusing to cross, they say.

Taxi drivers complaining of worsening traffic in surrounding streets represent the majority of opposition to the scheme, and on 1 June 2015 the High Court of Justice refused an application for judicial review brought by the Licensed Taxi Drivers Association (LTDA).

Meanwhile a local paper reports the road changes have caused hours of traffic jams and confusion, with drivers filmed attempting to turn the wrong way into the street, which is now one way.

Camden Councillor Phil Jones, who approved the scheme, told road.cc people are incorrectly blaming all congestion on this scheme when other factors are at play.

Jones says: “I think it is important to recognise that often people are blaming any gridlock or any delay in the area on the trial, whereas we know there’s other road works going on which we believe have been a lot more significant.

“They seem to be focusing on one thing for whatever reason they have, but it’s not fair to say it’s because of the scheme.”

Jones says traffic data will be released in the coming weeks, and a consultation on the scheme will begin soon. He says support has come from across the borough, where in this area more than 70% of households don’t own cars.

He says changes are part of a "longstanding commitment to prioritising walking and cycling", and that support has already come in from businesses whose employees use the key East-West route.

“We will do a consultation to see what people think, there will be support for what we have done and have hope that the traffic will improve and hopefully there will be more people cycling the route and they will feel that they have a better safer experience; that the pedestrians, residents also think it’s better for them.

He added it is important for supporters to make their voices heard.

"If you do want things like this to happen they do need to support it because there is a lot of people who will be opposing."