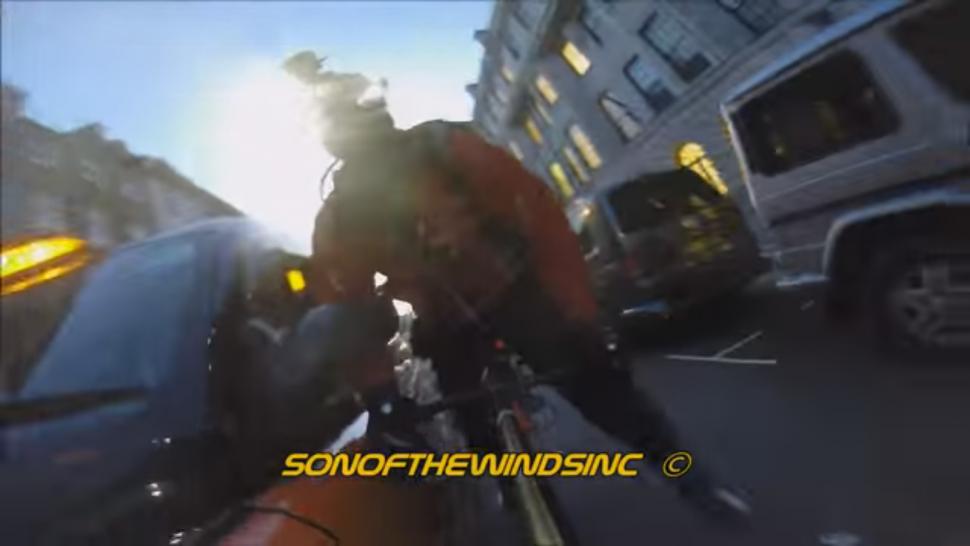 The London cyclist known as Traffic Droid, who has recorded all of his cycle journeys since 2010, tells road.cc he's no vigilante, that he doesn't go out looking to bait drivers, but is motivated by justice on the roads.

Following the release of footage this week from his five bike- and helmet-mounted cameras, showing him being run off the road by a taxi driver in March, Traffic Droid, who posts videos on YouTube as Son of the Winds, says he was scared to cycle the route for two weeks.

Droid, who submits up to 20 videos a week to police from his daily eight mile commute through central London, says he was so scared after the taxi incident released last week, he avoided the route or walked along the pavement instead for two weeks afterwards.

He believes this is part of a wider problem of aggressive driving “that ripples all over London”, which needs to be tackled by the criminal justice system.

He told road.cc the taxi incident left him shocked and confused.

"I didn’t expect that to happen,” he said.

“This is a story of a taxi driver but it is an issue that ripples all over London – aggressive driving, cutting up, tailgating.

“I was lucky he didn’t hit me directly from behind, I would have gone under his vehicle. That made me scared for about two weeks, I avoided that route and walked that section of road. I was scared he might come back for me. I’m human, after all.”

It took nine months for the driver to be convicted.

He said: “From the time of the accident it took three months before I got any kind of notification. They came back and said he was going to be sent on a driver safety course, but he wouldn’t get points or a fine. I thought that was really lenient.”

However, the driver refused to take the safety course and was taken to court, receiving 6 license points and a £700 fine thanks, Traffic Droid says, to the cameras.

“Without my cameras he would have got away with it because it’s their word against ours, as cyclists.”

He says Rule 163 of the Highway Code, that people should only overtake cyclists when it is safe to do so, should be "beefed up" with fines, adding close passes, tailgating and aggressive driving are his three main concerns when riding on the streets.

Traffic Droid started filming his commutes after an oncoming driver turned right in front of him in 2009, hitting him head on. His injuries included two broken ribs and he was off the bike for two months. He got his first GoPro, then a rear-facing camera and three others, taking the total up to five.

He has carried up to eight cameras at one time, but this used too much data, he says, claiming he currently uses four terabytes of information each month for the films, which he saves “like books” on his shelves.

Now he sends up to 10 videos a day to police, filling in a separate form for each one, a process he calls “agonising”.

“When any bad driving incident occurs I report it and go through a legal process [filling out a #966 traffic collision incident form, specific to the Metropolitan Police], some of which result in convictions or court appearances," he says.

“I always pray not to send any because it’s agonising, it takes my free time.

He claims the last big week saw him send 24 clips to police, 20 of which resulted in convictions. from fines to safe driving courses.

“A lot of drivers are sent on safety courses, I catch a lot of people on mobile phones, or even iPads, or driving dangerously but it’s very, very, hard work: I have to spend at least half an hour per form filling in police incident forms, then I have to send in CDs within seven working days so the driver can be notified within 14 working days.”

Of the videos he sends to police the majority, he says, result in a conviction, from a driver safety course to a fine with points on the driver’s license, to court hearings. He says submitting evidence directly to police has achieved far more convictions than submitting videos via RoadSafe, which, he says, have mostly resulted in no further action being taken.

Droid has been branded a “vigilante” by national papers, a title he won’t accept.

“I refuse to be called a vigilante because I don’t go out of my way to catch people, I’m just an active citizen; that is it.”

He encourages other cyclists to use helmet cameras to report bad driving because, he says, “if you don’t have a camera it is very likely they will get away with it. A camera is a very powerful thing.”

He adds: “My advice to cyclists is don’t get too mad, too angry, because when it comes to a court case people will say ‘this guy is just an angry person’.”

Having been posting videos online for several years now, and with one camera mounted in front of his bike filming him cycling, Traffic Droid says he is recognised on the streets, which can be “scary” at times. He even believes the taxi driver from the incident recognised him.

He plans on sharing the taxi crash footage with the taxi community to encourage them to talk about the incident and see things from a cyclist’s point of view.

He says: “We aren’t riding centrally to annoy them, we are only trying to protect ourselves.