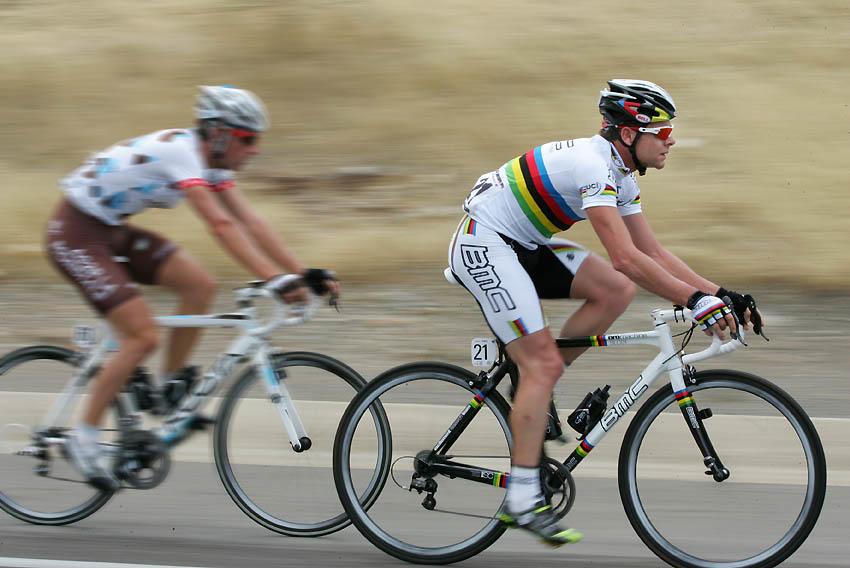 Drugs, broken bones and a Classics win - a mixed day for BMC

BMC Racing’s celebrations of Cadel Evans’ maiden Classics win in yesterday’s Flèche Wallonne have been overshadowed by the news that Swiss rider Thomas Frei has tested positive for EPO and a nasty injury to the Dutch rider, Karsten Kroon.

News of Frei’s positive test broke after he had completed Stage 2 of the Giro del Trentino, where he lay sixth in the General Classification, which is led by two riders who have themselves returned to competition in recent months after serving bans for blood doping – Alexander Vinokourov of Astana, and the Italian Riccardo Riccò, now riding for Ceramica Flaminia.

While it’s unclear when Frei’s positive sample was taken, and as yet there has been no statement on the UCI website regarding the rider, his team have suspended him with immediate effect.

In a statement on the BMC Racing Team website, President Jim Ochowicz said: “It has come to our attention that Thomas Frei has been informed that he was tested A-positive regarding the use of EPO. As a consequence, the BMC Racing Team and its members have made the decision to withhold Thomas Frei from competition, in accordance with the BMC Racing Team's own policy. This should not be seen as pre-determination of guilt. The rider will now have to personally address the accusation.”
http://www.bmcracingteam.com/index.php?id=9&L=0&uid=761

Meanwhile, on his personal website – where, should you wish, you can buy a ‘Don’t Stand On My Dog!’ t-shirt –  World Champion Evans revealed that some of the gloss had been taken off his first Classic win by the injury to Kroon.

“I have always liked this race, hilly all day, not too long for this time of the year — with all of the other races I have to get ready for,” he said.

The Australian continued: “195 km ending on the very steep Mur de Huy, it all went my way this year. Well almost... A bad crash on a fast descent took out my right hand man Karsten Kroon early on in the day. He took the entire impact of a 60 km/h+ crash on his face — that is one thing that really scares me.”

Evans added: “He is all right considering the crash, of course he could be better but three fractured bones and an enormous amount of swelling in his face will all heal. He was well enough to be able to have a small glass of champagne with us at the dinner table this evening, it could have been a lot worse.”

At present, it is unknown how long Kroon’s injuries, which happened in a crash some 80km from the end of the race, will keep him out for.

Turning to the race itself and the manner of his victory, Evans said: “It was a bit of a mess with the usual traffic islands, narrow roads and other road obstacles Belgium has to offer, but I made it through to the final and it was nearly all Spanish guys doing the damage on the last ascent of the Mur de Huy, my experience helped me with my timing which was probably what got it for me in the end.”