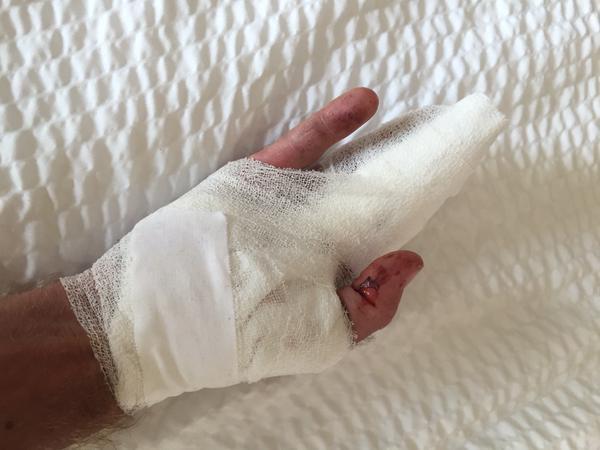 Do you wear cycling gloves?

A reminder of the importance of wearing cycling gloves, unfortunately and painfully reminded by Michael Rogers at the world champs
by David Arthur @davearthur

Tinkoff-Saxo’s Michael Rogers had a nasty reminder of the the downsides of not wearing gloves while partaking in the World Championships team time trial in Richmond, US over the weekend. Here’s his tweet from yesterday.He’s clearly kicking himself for not wearing any gloves. Looks nasty.

This is an example why you should ALWAYS wear gloves when you ride a bike pic.twitter.com/wJ9cZukgU6

If you missed the crash, here’s a replay. Michael Rogers and Michael Valgren hit the road at speeds in excess of 40mph after an innocuous touch of wheels. Riding a team time trial requires riding extremely close to the rider in front, leaving little margin for error. You pay a high price for even the smallest mistake.

"I think it was a simple touch of wheels. I don't know what happened, there was nothing I could do, I just went straight over the top,” said Michael Rogers in a post-race interview with Cyclingnews.

“It's just superficial injuries at the moment, nothing broken, just a little skin off the top. I'll be feeling pretty sorry for myself for the next couple of days, but there's nothing you can do about it now,” he added.

No one plans to crash of course, but accidents do happen. So, will you be wearing cycle gloves next time you go for a ride?