Electronics giant Pioneer joined the burgeoning power meter market a couple of years ago with its crank-based device, but it has now added new single crank arm power meter to rival the popular Stages power meter. And with prices starting at £599.99, it's a lot more affordable than its previous offering.

Called the SHY-PM910HL, to give it its full name, the power meter is available in Shimano Dura-Ace 9000 and Ultegra 6800 versions. It uses ANT+ to send data to a compatible computer, and of course it works with Pioneer’s own SGX-CA500 cycle computer.

The power meter provides the same benefits as the Stages power meter used by Team Sky. It can be quickly fitted to the bike, and can be swapped between different bikes easily. It can also be combined with Pioneer’s current SGY-PM910HR crank-based power meter if you want to upgrade at a later date for left and right leg power capture.

Pioneer claims calibration is quick and easy, and the CR2032 battery is replaceable and lasts a claim 180-hours. It’s water resistant and is IPX6 and IPX7 rated, and has an safe operating temperature zone of -10°C to 50°C. The power meter adds 22g of weight to the crank arm.

- Pioneer get into the power meter game

One appealing attraction of the Pioneer power meter is force and direction of force measurement. It measures and displays results for every 30˚ of pedalling rotation, with 12 locations per revolution. The Pioneer cycle computer can display this data real-time, so you have the opportunity to really look to improve your pedalling efficiency. 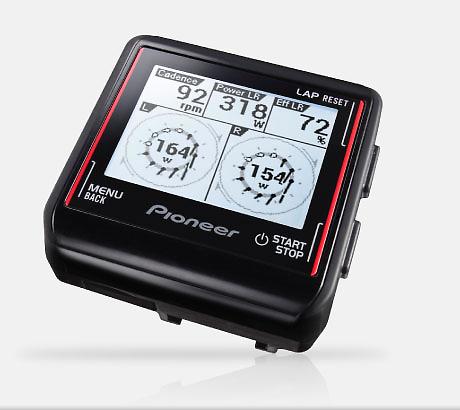 To analyse your data Pioneer has developed its own Cyclo-Sphere Data Analysis Web Service, which provides ride summaries and a detailed metrics.

Stages has recently dropped the prices of its own power meters so the market really is hotting up right now, with more choices and lower prices.

Pioneer power meters are being distributed in the UK by i-ride.co.uk.

1
Chris Boardman has sold his car and is working part-time at Halfords
2
Watch Live: Tour de France Virtual Stage 1
3
Near Miss of the Day 433: Police tell cyclist “We all have to share the road” after very close pass from lorry driver
4
Special-edition 25 year anniversary Shimano SPD sandals launched. Still comfort over style, then.
5
Apple Watch with cycling power estimation is a step closer to reality
6
Video: “…not got your licence plate” – Black cyclist stopped by London cop for "anti-social behavior" including not wearing helmet or hi-viz
7
Outdoor and bike brand Alpkit raises £1.5m in crowdfunding – in less than an hour
8
Near Miss of the Day 434: Cyclist starts using camera after driver forces him off road – and captures three close passes in a week