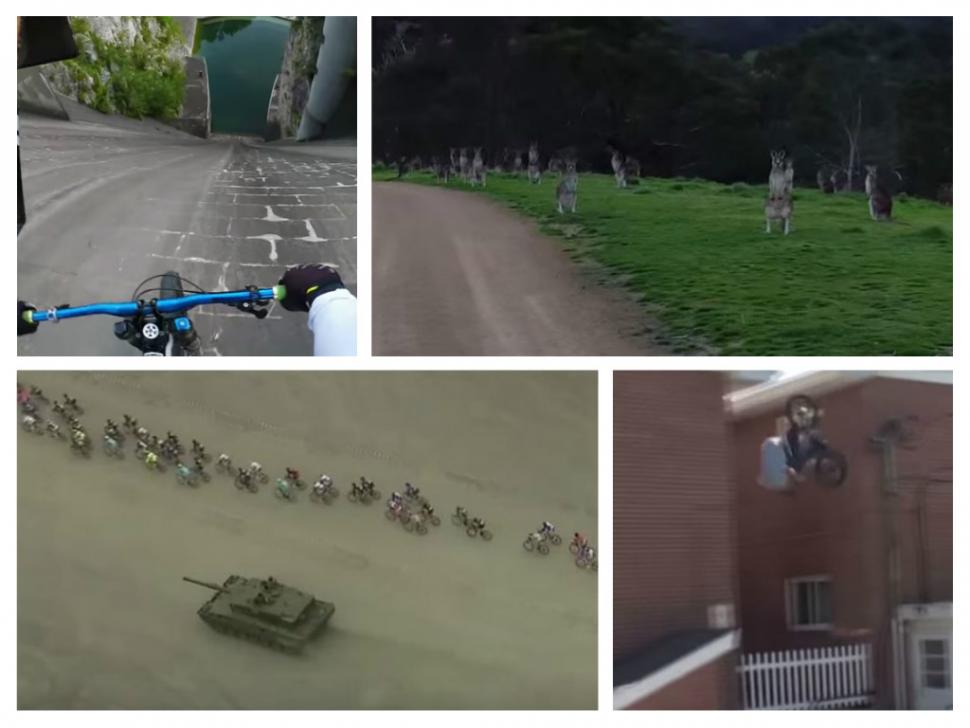 Starting with an eerily terrifying cyclist-on-kangaroo-horde stare down, and finishing with a bloke cycling face first off a dam and into a reservoir, this video round-up's got a lot going for it.

After you've been thoroughly spooked by the mental marsupials, we've got a tank interfering with a professional cycling race, and one of the crazier urban backflips we've seen.

Following those there's a prank involving an unsuspecting cyclist and a $100 bill, one of the worst examples of foul-mouthed road rage we've seen directed at a mother and her two children, and a really distracting head mounted cycling computer.

So, without further ado, here are some creepy kangas.

Our resident kangaroo expert here at road.cc suggests that these are a gang of Australian Eastern Grey kangaroos, which can weigh up to 66kg and can travel up to 40mph.

In that knowledge, we're not surprised the cyclist was a little freaked out.

Tour of Norway joined by a tank

Half way through last month's Arctic Race of Norway the cyclists were joined by a somewhat threatening vehicle.

We can't imagine cycling in such close proximity to such a massively destructive vehicle, only protected by a thin strip of plastic and a helmet, is particularly conducive to a healthy riding style

For a moment let's pretend we're all on a website titled BMX.cc so we can enjoy this one to its fullest.

Zack Gerber is a renowned for his energy and distinctive laugh - you can see more of his stuff here.

No one likes to be embarrassed. This unsuspecting cyclist certainly doesn't.

The classic, fishing-line-attached-to-money pranks works like a charm here, as the cylcist throws himself to the floor in order to grab the money, only to be embarrassed before storming off in an expletive-heavy tantrum.

Talking about expletives, this is one of the worst examples of road rage swearing we've seen.

That rating isn't necessarily down to the words that have been used - and arguably the 'worst' swear word is used - but because of the recipient of the abuse.

As the video footage shows, this woman did in fact look behind her before pulling out - she could have perhaps had a longer second look - but nothing she did could excuse the driver's foul-mouthed abuse.

YouTube comments suggest that the woman is pursuing legal action, as the use of the 'c' word makes this a case for gender-based harassment.

The most distracting cycling accessory ever?

We've heard talk over the last couple years about how hands-free, head mounted computers are going to revolutionise the world.

We've also heard plenty of talk about how distracting, and potentially dangerous, these devices will be for road users - especially vulnerable users like cyclists.

This demo right here, in our opinion, is a prime example of how distracting these sorts of devices could be.

Cycling off a dam

And finally, it seems that simply fixing a GoPro to your head is enough to make you do something a bit mad.

We wonder how many of us would consider riding face first into a reservoir though.