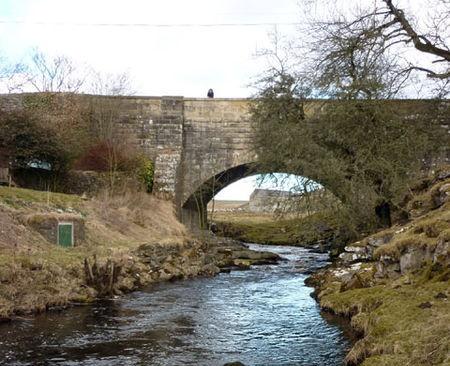 A 41-year-old cyclist has died after falling from Dibbles Bridge in the North Yorkshire Dales. It is thought that he lost control of his bike on a steep descent and crashed into the wall of the bridge, beyond which there is a 15 metre drop.

George Ballard was riding on the B6265 at Dibbles Bridge between Grassington and Pateley Bridge at about 8.30am on Sunday when the incident took place. Members of Grassington’s Upper Wharfedale Fell Rescue Association and the Yorkshire Air Ambulance attended the scene, but he could not be saved.

The Yorkshire Post reports how another cyclist, 32-year-old James Nelson from Skipton, died at the same spot last August.

An inquest heard that Nelson had been out on an evening training ride when his wheels locked while braking. He hit the bridge parapet and fell and his body was found the following morning by two Environment Agency workers who were conducting a survey of the river Dibb. A post-mortem examination later concluded he had died from multiple injuries to his head and chest with the coroner recording a verdict of accidental death.

The bridge was also the scene of one of Britain’s worst-ever road crashes in 1975. The brakes of a coach carrying a group of pensioners overheated, causing it to run down the hill, crash through a steel safety barrier and hit the bridge. The coach flipped over, landed on its fibreglass roof and its sides buckled, resulting in 33 deaths. A memorial service was held in May to mark the 40th anniversary of the crash.

“Police are appealing for witnesses after a fatal road traffic collision on B6265 Dibbles Bridge, between Grassington and Pateley Bridge.

“The collision occurred when a pedal cycle heading towards Grassington, from the direction of Pateley Bridge, collided with the bridge throwing the rider over the bridge into the stream below. The rider of the pedal cycle, a 41 year old man, received fatal injuries.”

Anyone with information about the tragedy can contact North Yorkshire Police on 101.