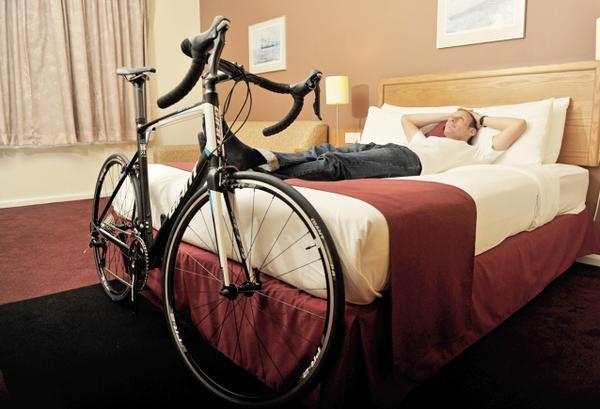 Future Inn Cardiff Bay has announced a raft of new measures intended to make it especially appealing to cyclists reports BikeBiz. With its Bike to the Future initiative, the hotel hopes to tap into what it hopes is a growing cycle tourism market.

The hotel was recently fully-booked with cyclists taking part in the Velothon Wales sportive and while that event appeared to attract more than its fair share of ill-feeling in the region, the Future Inn chain appears to have rather embraced cycling.

The hotel has launched a specific bike-friendly service with bike racks and complimentary secure storage. Bikes are allowed in rooms with the hotel providing a protective bike mat for anyone who wishes to take advantage of the policy.

As well as being a source of information about local cycle routes, the hotel’s reception also has a range of basic bike repair items to hand and thanks to a partnership with the local Cyclopaedia bike shop, it’s easy for visitors to get parts and repairs.

The hotel’s Thomas Restaurant has also been showing each stage of the Tour de France, offering French beers and special dishes during the race.

“Over the past few years we have welcomed both professional cyclists and cycle guests to our hotel and it seemed a positive and logical opportunity to expand into this sector as the trend for cycling continues to grow,” said Przemek Kaminski, the managing director of Future Inns. “Our Cardiff hotel is also ideally located for the Cardiff Bay cycle path and access to the Taff Trail, the Wales National Velodrome and Bike Park Wales,” he added.

Hotels are not always so friendly to cyclists and even those offered to teams during the Tour de France sometimes leave much to be desired. Team Sky had planned to house Chris Froome in their own motorhome during this year’s race until the UCI voted to block the use of alternative accommodation on grounds of fairness to all riders.

Then there are other hotels which go just a little further to appeal to a cycling crowd. Last year we reported on a Slovenian hotel owned by an ex-pro who boasts that he can control the percentage of oxygen in each room to mimic the effects of being at altitude.