Three major brands have all just revealed road helmets designed with aerodynamics in mind, so here are the Bontrager Ballista, the Giro Synthe MIPS and the MET Rivale.

All three helmets are designed for general road use as opposed to being time trial-specific, hence the silhouettes being similar to those of standard road helmets. There’s nothing with a long tail here. They’re all currently being used in the Tour de France.

Jens Voigt actually wore a prototype of the Ballista when setting his hour record last September and Trek Factory Racing riders have been wearing Ballistas since the Tour Down Under. /content/news/130539-jens-voigt-smashes-hour-record-his-final-challenge

Bontrager says that it used computational fluid dynamics (CFD) to analyse prototypes of different shapes and vent configurations, and then took a collection of physical prototypes to be tested in the San Diego Wind Tunnel. The aero results persuaded the designers to select a mid-length helmet with three central vents. Bontrager says that the helmet concepts were then tested on heated head forms with 36 thermal couples in order to find out about the cooling properties of each venting system. A front-centre channel is designed to draw in air for increased cooling while internal recessed channels are included to manage airflow through the helmet and over the head.

The Ballista features Bontrager’s existing Headmaster II fit system that allows you to make adjustments via a dial at the back.

Bontrager claims a weight of 262g for a medium size helmet. We have one in for review here at road.cc and ours is 266g.

You can choose between matt black, polished white, high-vis yellow, and the Trek Factory Racing team issue white. Like all of Bontrager's helmets, Ballista comes with a crash replacement guarantee: you get a free replacement helmet if it’s damaged in a crash during the first year of ownership.

Giro has unveiled the Synthe MIPS that will sit in the range alongside the existing Synthe that we've reviewed here on road.cc. It is currently being used in the Tour de France by members of BMC, Katusha, and IAM Cycling.

Giro has already added MIPS technology to some of its other models. MIPS stands for Multi-Directional Impact Protection System and it is said to provide more protection in certain impacts. MIPS-equipped helmets have three key features: an interior foam liner, a Low Friction Liner, and an elastomeric attachment system between them.

“In an angled impact, the elastomeric attachment system stretches to allow the interior foam liner to rotate independently around the rider’s head and redirect energy,” says Giro. “Although the system only moves a few millimetres, Giro’s testing shows that helmets equipped with this technology can reduce the amount of rotational force that may be transferred to the brain in certain impacts.”

The Synthe MIPS, like the existing Synthe, is designed to offer better aerodynamics than a standard road helmet. “Using wind averaged drag, a formula that takes into account 72 different yaw angles and calculates a single drag measurement for a standard head angle of 30° and speed of 25mph, the Synthe MIPS is more aerodynamically efficient than any road helmet Giro tested, including the acclaimed Air Attack,” says Giro.

We don’t know which other helmets were included in that test.

The Synthe MIPS is said to weigh 260g (CPSC-certified version in size medium) – so virtually the same as the Bontrager Ballista. It will be available from late summer in four different colours at £225.

MET’s new Rivale is being used by Team MTN Qhubeka in the Tour. The brand says that it is “the lightest open aero road helmet in its class”, weighing in at 230g. “The streamlined and compact shape provides unbeatable low drag performance for its class with a saving of three watts at 50km/h (31.25mph),” says MET. “Utilising the Venturi effect [the reduction in pressure that results when air flows through a constricted space], the strategically positioned vents allow for the maximum intake of air by pulling the air through the helmet to the rear exhaust vents.”

The Rivale is made using what MET calls its HES technology. HES stands from Homothetic Embedded Skeleton and the idea is that  it ensures that the force of any impact isn’t localised in one specific region. 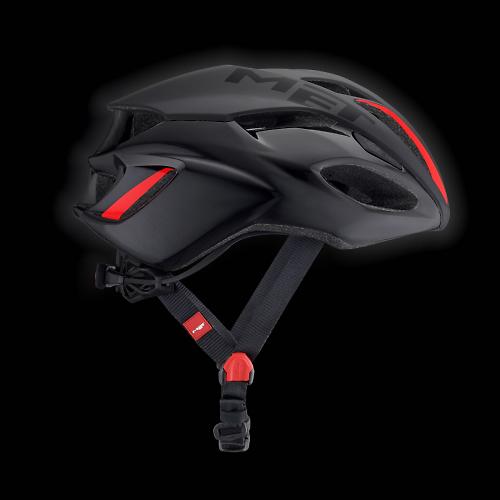 The Rivale uses MET’s existing Safe T Advanced retention system which is designed to have a large cradle surface area for security and comfort, and also to provide ventilation to the back of your head. You get the choice of four different vertical fit positions for the cradle and you fine-tune the fit using a micro adjust dial at the back. A retention ring goes 360° around your head to secure the fit.

We don’t have details on UK availability or pricing yet, although we have asked MET for that information.