This is the Pinarello Bolide bike that Chris Froome will ride in the time trail that opens this year’s Tour de France.

Pinarello launched the Bolide two years ago and Froome used it en route to winning the 2013 Tour. Sir Bradley Wiggins also rode a track version of the Bolide to the World Hour Record last month. 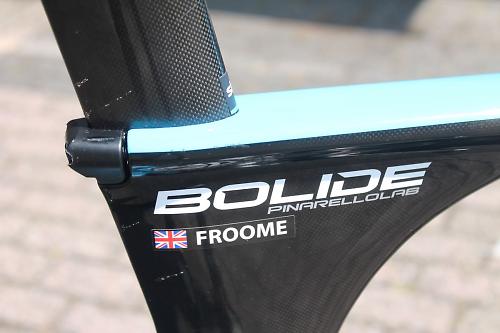 The seat tube is designed to improve the airflow towards the rear of the bike, wrapping around the leading edge of the rear wheel. 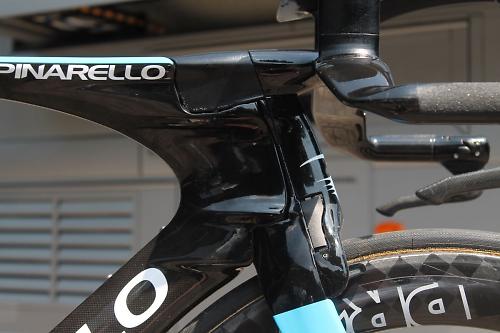 The front brake is integrated into the fork to reduce aerodynamic resistance, and although it’s positioned in a conventional position on the seatstays, the rear brake is shrouded so as not to disturb the flow of air. 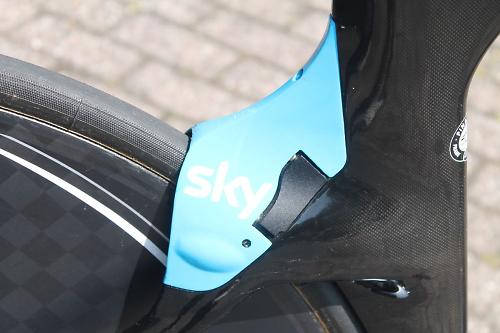 The battery for the Shimano Dura-Ace Di2 electronic shifting is hidden away inside the frame and the wires, along with the brake cables, run internally. 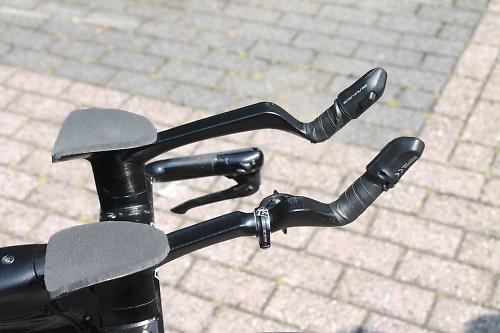 You can get a Shimano Di2 system where one bar-end shifter controls the front mech and the other one controls the rear mech. Each shifter is equipped with two buttons: one of them moves the mech in one direction, the other moves it in the other direction. However, Froome goes with a system that uses just one button per shifter. The left shifter moves the rear mech in one direction, the right shifter moves it the other way. If he wants to move the front mech he needs to use buttons on the base bar. 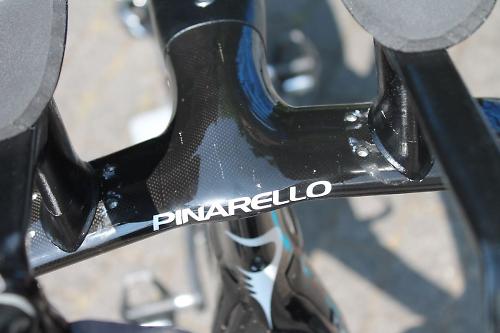 The aero bar, including the buttons that control the Di2 from the base bar, are Pinarello’s own design. Grip tape at the ends of the base bar avoids hands slipping.

That aero bar incorporates a stem and flows directly into the frame’s top tube so as not to increase the bike’s overall frontal area. 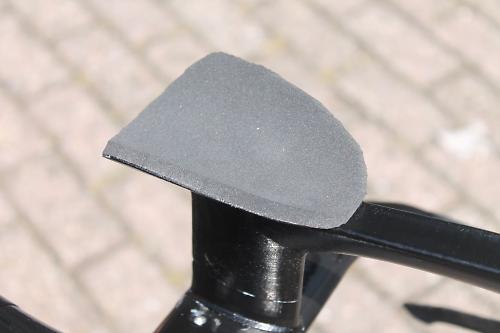 The forearm rests don’t look the most polished design ever. In fact, they look a bit… budget. We’re guessing they work just fine though.

The Bolide is built with a tapered head tube (1 1/8in at the top, 1 1/4in at the bottom), asymmetric chainstays (the driveside one is built beefier to handle the powers associated with transferring power to the rear wheel), and an oversized BB86 bottom bracket. Froome uses O.Symetric non-round (they’re twin cam rather than oval or elliptical) chainrings mounted to an old-style five-arm Dura-Ace crank. The transition from the spider arms to the outer chainring isn’t nearly as smooth as it is with a standard set-up. It’s functional rather than pretty! 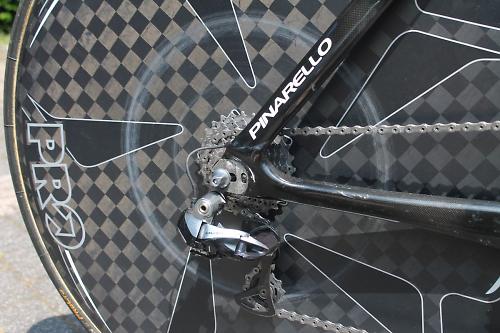 Chainrings aside, the groupset components are Shimano Dura-Ace Di2 throughout and the wheels come from Pro, Shimano’s sub-brand. Froome uses a three-spoke front wheel while the rear wheel is a Textreme carbon disc. The two faint circles on the disc wheel have been caused by the rear mech rubbing slightly when using the largest sprocket. 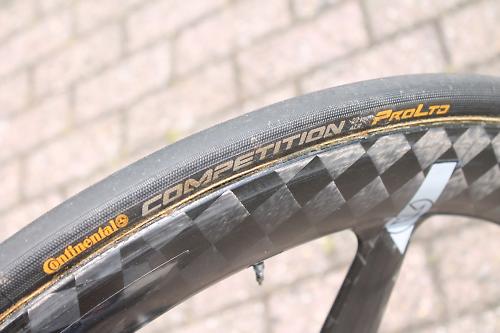 The tyres are Continental Competition Pro Ltd tubulars. These are 22mm wide and they live up to their name by being only available to pro riders. 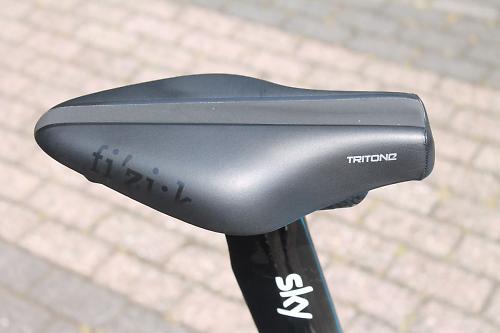 The saddle is a Fizik Tritone 5.5 Braided with a carbon-reinforced nylon shell and carbon rails. As is usually the case with time trial/triathlon-specific saddles, it’s noseless for comfort when riding in an aero position. We spotted that Froome had picked up a bit of extra weight on his most recent training ride. That’s a dead bee lodged in there between the limit screws on the rear mech. Or maybe it was just resting. Either way, the mechanics will have it out of there and the bike sparkling before it gets anywhere near the start ramp. 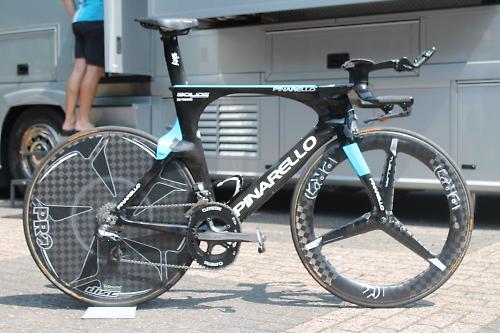 By the way, this is the full-bike photo we decided not to use on the basis that it looks like there’s an Oompa Loompa standing on the rear wheel. As far as we know, Team Sky hasn't started employing Oompa Loompas. Yet. If there were any marginal gains to be had through it, though, it might be a different story.

For more info go to www.pinarello.com