Fabric, the company best known for a range of saddles developed by the guys behind Charge Bicycles, has branched out and introduced the new cageless Fabric Water Bottle, which does away with the traditional water bottle cage in favour of custom bottle bosses. 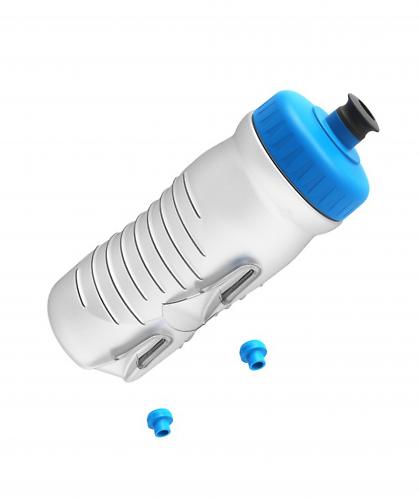 The new Fabric Water Bottle is a complete solution. It uses a pair of custom mounts that fit to regular water bottle bosses and the special water bottle simply hooks onto these mounts. Fabric says it’s secure and enables easy quick release. The biggest benefit of this design, according to Fabric, is that it’s very light - the mounts weigh just 3g, lighter than even the lightest carbon fibre bottle cage. The mounts also maintain the clean lines of the bicycle when a bottle isn’t being used as well. Fabric also reckons its new system is more secure than a conventional water bottle and cage, so less chance of losing a bottle when riding over rough ground or cobbles.

It’s not quite as revolutionary as Fabric would like you to believe, the Vincero Design Stratus20 bottle and mount system uses a similar design approach, but that one uses magnets in a specially designed mount and compatible water bottle.

The Fabric Water Bottle is significant cheaper though, it costs £11.99, which gets you the bottle and mounts. Initially it is only offering a 600ml bottles but plans to add a 750ml at the end of the year, and also adds that the system allows for different bottle sizes and shapes, allowing the possibility of bespoke designs.