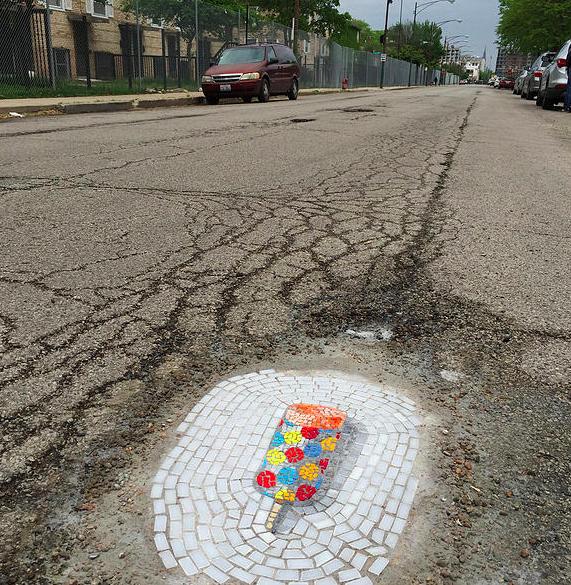 An artist in Chicago has taken on a public service and brought some colour to the streets at the same time by installing ice cream themed mosaics in pot holes.

Jim Bachor has spent three years creating a variety of designs including flowers, trees and text in pot holes, and this year he has turned his focus to a variety of delicious looking sweet treats. 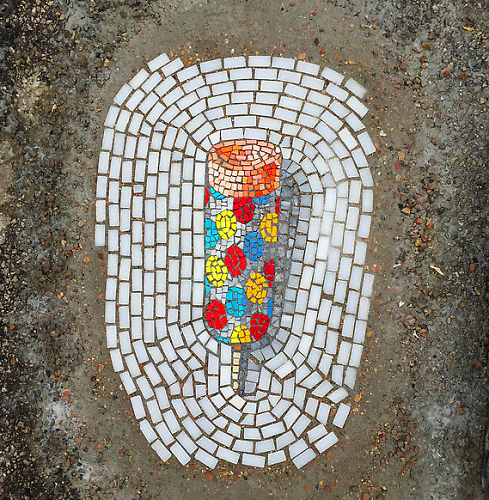 The series of 10 pothole mosaics called Treats in the Streets have appeared in locations around Chicago, as well as far flung locations including Jyväskylä, Finland where he made three more mosaics last week including a local popsicle-like dessert called Amppari-mehujaa.

Bachor says to keep an eye out for three more pieces back home in Chicago sometime before summer hits.

We recently reported how one London cyclist is employing ‘guerilla gardening’ tactics to help fill in potholes, using soil and flowers sourced from Columbia Market to draw attention to the hazard in a colourful and unusual way.

Steve Wheen, aged 33, said: “I find potholes a constant menace and I've almost come off my bike several times. I'm also a mad-keen gardener and wanted to make a point."

The art student continued: "I choose smaller roads and pavements for safety. I use plants with colourful flowers in the hope motorists will see them and avoid them. My first effort lasted two hours but one lasted three weeks. If it draws a cyclist's attention to a pothole and puts a smile on their face it's good enough for me."

Examples of Steve’s work can be found on his website, www.thepotholegardener.com.