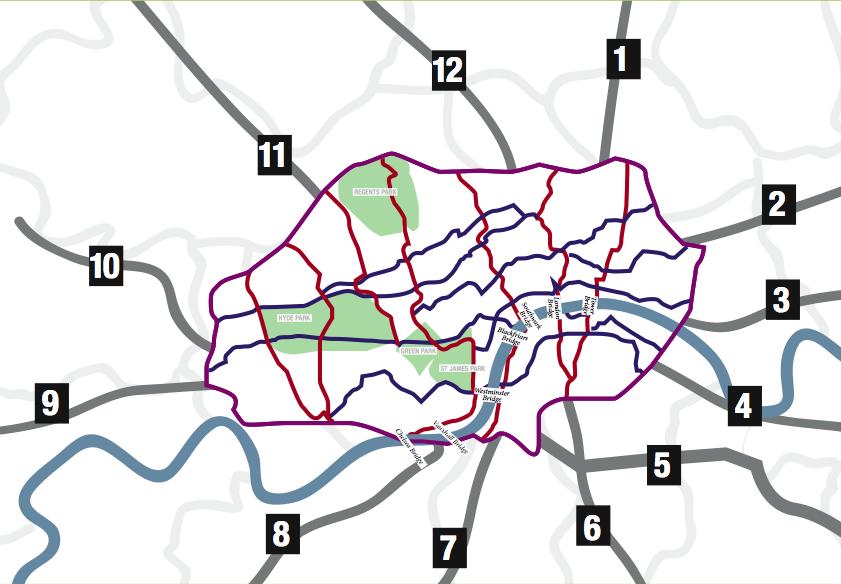 Members of the London Cycling Campaign (LCC) have outlined their detailed proposals for a ‘BikeGrid’ providing key north to south and east to west routs for cyclists across the centre of the capital to Transport for London, first mooted last year.

The BikeGrid, which uses proposed cycle lanes or traffic-calmed roads to cross the heart of London would connect the arrival points in the city of Mayor Boris Johnson’s proposed Cycle Superhighways, and are also a response to the scrapping of the London Cycle Network, which had only been 60% completed.

The proposal also aims to meet what is expected to be greater volume of bicycle traffic in central London from this summer, when the London Cycle Hire Scheme sees 6,000 hire bikes deployed on the capital’s streets, which is expected to result in an additional 40,000 trips by bicycle being made each day within the hire zone.

Commenting on the presentation of the proposals, LCC chief executive Koy Thomson said, "We've given them a detailed plan for free. Let's hope they do all London cyclists a favour and adopt it wholesale."

According to an article in the February/March 2010 issue of the LCC magazine, London Cyclist, “the sad fact is there currently isn’t one complete east-west or north-south cycle route that crosses Zone 1 — and central London needs an integrated cycle network now like never before.”

The organisation says that the BikeGrid is also needed because the Cycle Superhighways, the first of which comes into operation later this year with the last being introduced in 2015, do not link into a bike-friendly route network when the arrive in the city centre.

Instead, says the LCC, “Under current plans, cyclists using these commuter-friendly routes will simply disappear into the 'black hole' that is the current central London ‘non-network’, often being dumped unceremoniously into dangerous one-way systems like Tower Hill,” adding: “It's a crazy situation and not one that's likely to help achieve the mayor's target of a four-fold increase in cycling.”

According to Thomson, “The BikeGrid is a realistic project that could transform swathes of London from noisy, grubby car alleys into open, safe and cheerful public spaces. Remember that 40 percent of households in London don’t have a car and Zone 1 is principally an area for commerce, shopping and tourism.”

Thomson insists that it’s a viable plan. “There’s no reason why we can’t reallocate space to cyclists and walkers in our public squares, just like they have in Times Square in New York,” he explains. “The Cycle Hire Scheme and the Cycle Superhighways mean now is the time to get this done.”

In the article, the LCC outlines two proposed routes, one running east to west from Tower Bridge to Lambeth Bridge, the other north to south from Regent’s Park to Green Park, highlighting both the problems that each would solve and the benefits they would bring.

In the case of the former, that includes linking major employers such as St Thomas’s and Guys hospital, both part of the same NHS Trust, as well as making approaches to Thames bridges safer and blocking rat runs regularly used by taxis and other through traffic such as The Cut and Upper Ground, both of which are streets with high volumes of pedestrians attracted by pavement cafés and amenities such as theatres.

The latter, meanwhile, would provide a link between central London’s Royal Parks, restore one-way streets such as Harley Street and Brook Street to two-way traffic flow to make them more amenable to both cyclists and pedestrians, and breathe new life into areas such as Hannover Square and Portman Square which, the LCC claims, “have been turned into car parks and roundabouts” by existing traffic schemes.

The article concludes with a call for Boris Johnson to take action to help BikeGrid become reality. “We know we have backers for the BikeGrid project within TfL,” says the LCC, “and borough councils are likely to welcome the plans if it draws money into their neighbourhoods and improves their streets. What cyclists need now, and what London needs, is the green light from our cycling mayor to make this essential and overdue project a reality.”