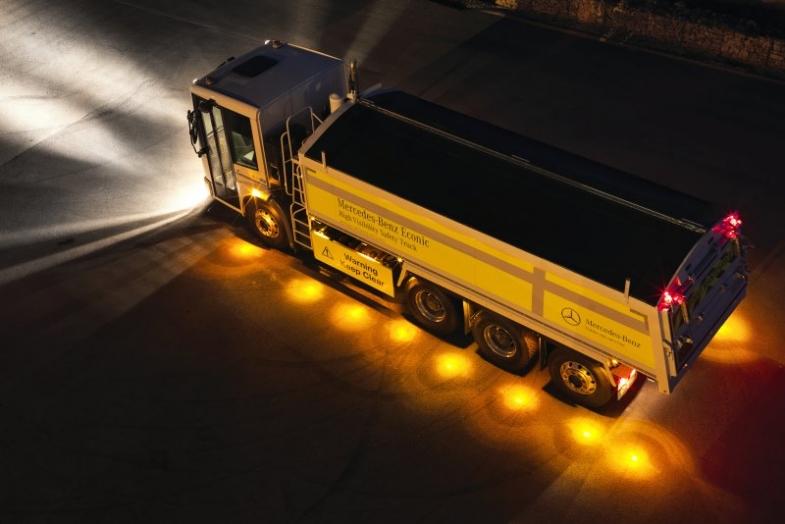 A downlighter system for trucks that could tell cyclists where they aren’t visible has been approved by the Vehicle Certification Agency.

The system of downward facing lights that illuminate the ground show the blind spots of large vehicles as well as aid the driver in locating the wheels when looking in the mirror.

The lights, made by Jimmy Beam Downlights, turn on at speeds below 15kmph and can be fitted on all trucks, or as standard by manufacturers, according to BikeBiz.

According to the manufacturer of the downlights, “feedback from operators and drivers has been consistent, all citing better working conditions when visibility is poor, pinpointing on-site manoeuvring, improved road presence and visibility, and easier drivers’ vehicle checks.

One of the first to trial the lights was Weedon-based haulier Dray Haul.

Its director Gavin Draper said: “Straightaway, in the yard, you could see the benefit. The halogen lights that light up the yard shine into your face and blind you, making it difficult to back into a space in a row of trailers, it’s all shadows; having the down light helped immediately, you can see everything around it.”

“Now you can see the trailers when it’s wet even though the mirrors are all misted up with the rain, and in the fog, because there is one curtain of light.”

Draper has since invested in more down lights to fit to two more trailers. “The drivers have fought over it,” he jokes.

Both he and Paul Allera, head of fleet at Fowler Welch, agreed the lights help drivers perform their walk-around checks before they set off to look at things like the lights and tyres without using a torch.

A new survey has found however that very few freight companies are investing in the new technology available to protect vulnerable road users.

Only one in five haulage companies use rear facing cameras on all vehicles, according to the survey by road safety charity Brake and fleet management and licence-checking organisation Licence Bureau found.

Only 8 per cent have side-facing cameras on all vehicles and only 12 per cent side sensors.

The survey also revealed that hands-free mobile phone kits were available in two thirds of lorry companies and in 80 per cent of car fleets.

Dr Tom Fisher, senior research and communications officer at Brake, said: "Employers whose staff drive for work have a duty of care both to their own employees and other road users.

"While not a panacea, technology can play a big part in helping them improve safety and exercise that duty, so it is disappointing to see that so many are not taking full advantage of new safety technologies on offer."

Les Owen, compliance consultant at Licence Bureau, said: "Surely it is obvious that the cost of a crash makes it sensible to consider fitting some of the safety technology items."

1
‘Tempting’ – Sunday Times columnist Rod Liddle on stretching piano wire across road to target cyclists
2
Near Miss of the Day 414: Driver overtaking cyclist at speed almost hits another head-on
3
Bishop fractures skull after being doored while cycling - but says he should have worn his helmet
4
Police refer themselves to watchdog after cyclist is seriously injured in collision with suspected drug driver
5
Durham cyclist kicked off bike by motorcyclist
6
Government to issue half a million £50 repair vouchers to get neglected bikes back on the road
7
Win an amazing 3T Exploro GRX Pro bike worth €4000!
8
RideLondon cancelled - all entrants to receive full refund