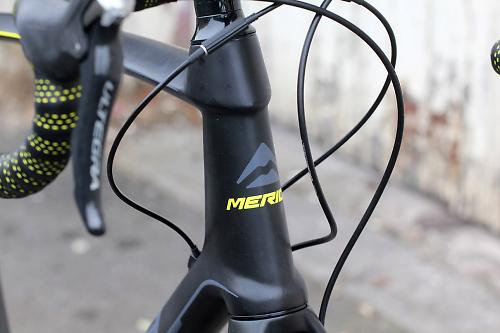 Merida’s Ride range consists of bikes designed for sportives and gran fondos, basically the sort of riding where comfort trumps all other criteria. The Lampre-Merida team use a Ride Pro Team for races like Paris-Roubaix, where bigger tyre clearance and comfort are needed to tackle, or should that be survive, the cobblestones that massively influence bike and tyre choice.

We’ve previously reviewed the regular Ride 5000 non-disc version of this bike and found it to be quick and offering plenty of comfort. The Ride Disc 5000 shares many of the same key features but it’s not identical, two big changes are the redesigned rear stays which have been bulked up, and there’s a completely different fork up front. There are a number of key things that set this Ride apart from Merida’s other, more racey bikes. First, the geometry is different, the head tube is taller, quite a bit taller in fact, a change that produces a more upright, less extreme, ride position. Less strain on your back and neck essentially if you don’t want to ride with your teeth clamped around the handlebar. Unlike some manufacturers that also shorten the top tube as well, Merida appears to have actually lengthened the top tube on the Ride Disc.

Let's look at the numbers. This 56cm test bike has a 570mm top tube, so it’s quite long, but the head tube is a whopping 20.5cm. That places the handlebars very high, it’s a stretched bike but not slammed low at the front. The angles are 73 degrees for the head and seat tube, the bottom bracket drop is 69mm and the wheelbase is a rangy 100.4cm. Reach is 384mm and stack is 610mm.

- 2015 disc road bikes: Some of the seasons hottest and most interesting disc-equipped road bikes Then there are the changes to the frame construction. Merida has carefully shaped the rear stays, it calls them ‘Flex-Stays’ and there’s a 27.2mm seatpost to provide some useful deflection. This top-end Ride 5000 model also has a carbon fibre layup that incorporates flax fibres, claimed to further dampen vibration. Several manufacturers use a similar approach, like Bianchi with its CounterVail layup in its Infinito CV for example.

The Ride 5000 features a fork with a 15mm bolt-thru axle to stiffen up the front-end, while at the back it’s a regular quick release skewer. There's much debate about the future of disc brake road bikes and opinion seems to be divided whether regular quick release or thru-axles are the best approach. At the moment there's no common consensus so we're seeing quite a mix. 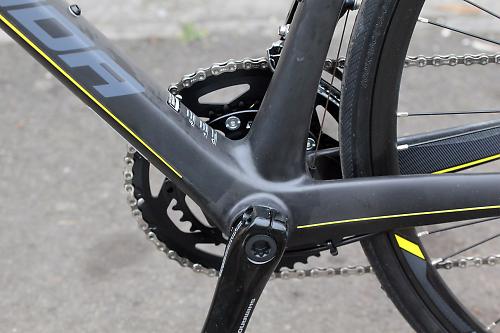 The frame has mounts for mudguards and there’s space for up to 28mm tyres, though it comes fitted with 25mm rubber, ensuring it ticks the versatility box. Merida even produces its own mudguards that fit seamlessly on the frame and fork, but most regular mudguards should fit just fine.

There’s a full suite of modern details. There's a tapered head tube, internal cable routing and on this model, carbon fibre dropouts. The rear disc caliper is located on the chainstay with post mounts, and there are post mounts on the fork too. 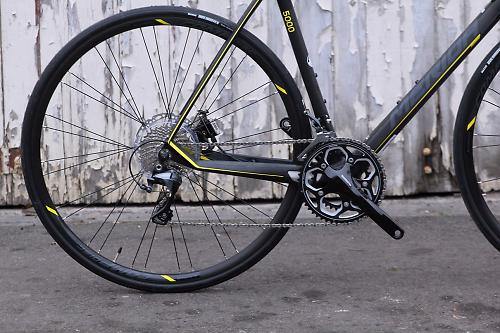 FSA provides the Gossamer compact handlebar and there’s a Merida Pro CF stem, carbon fibre seatpost and a Prologo Kappa 2 saddle completes the build. Its quite a lot of bike for not a lot of money. 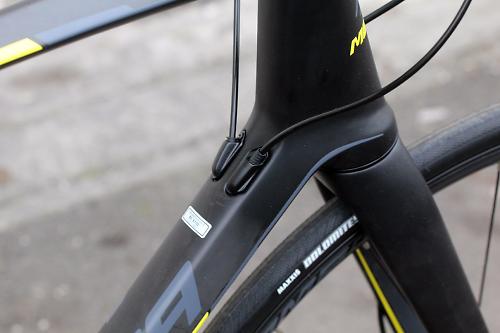 The complete bike in this size 56cm weighs 8.31kg (18.32lb). That’s about the going weight for a carbon fibre disc-equipped road bike with a Shimano Ultegra groupset and hydraulic disc brakes.

We’ve had a flurry of carbon disc-equipped road bikes through the office for review in recent months. It’s a category of road bike that is gaining in popularity, in fact we even awarded the Cannondale Synapse Disc the road.cc Bike of the Year 2014/15. Comparable bikes we’ve reviewed include the aforementioned Cannondale Synapse Carbon Ultegra Disc, De Rosa’s Idol Disc, Fuji Sportif 1.1 Ltd, Giant Defy Advanced SL, Orbea Avant and Specialized’s S-Works Tarmac Disc. That's some healthy competition so we'll be keen to see how the Merida stands up in comparison. On paper it certainly offers very good value for money, will it ride as well as it looks? Tune in for the full review soon.

You can read more about the Merida Ride Disc 5000 here www.merida-bikes.com