Bowman Cycles, the Kent-based company behind the Palace aluminium frameset that road.cc reviewed earlier this year, has just launched its second model, the disc-equipped Pilgrims. I headed along to Surrey last week to take it for a spin and see what it’s all about.

The new Pilgrims frame is constructed from custom shaped triple butted 7005 aluminium and is designed specifically for disc brakes. It’ll be available in a painted or anodised finish, and features a tapered head tube, internal cable routing and a pressfit 86 bottom bracket. Claimed frame weight is about 1,350g for medium. The Pilgrims also has space for up to 35mm tyres, or 32mm with mudguards. 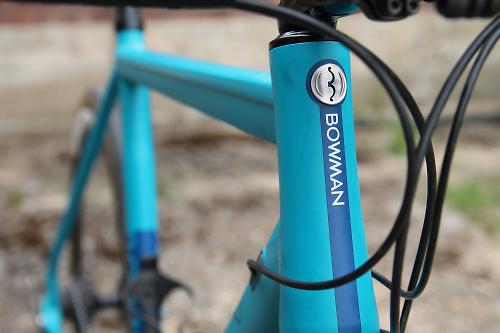 We’re on the cusp of a disc brake revolution in road cycling at the moment. Bikes with disc brakes have steadily been appearing on the market for the last few years, and rather than a trend being led by the big bicycle corporations, some of the smaller UK outfits have recognised changing riding styles and habits and seized the initiative. The likes of Genesis, Donhou, Mason and Bowman are arguably at the forefront of delivering the sort of bicycles that many cyclists are looking for today. 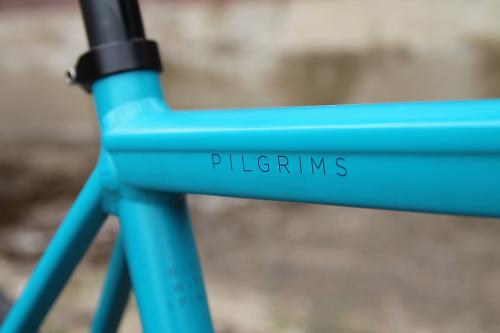 What sort of bicycle are they looking for? Well they want disc brakes for a start; increased control, low maintenance, improved stopping power in all weathers. Then there’s the increased tyre clearance - made easier by the absence of tyre width restricting calipers - so you have a wider scope of tyre choice, from traditional narrow 23mm rubber right up to wide treaded, almost cyclo-cross, tyres.

The choice of tyre simply depends on the sort of riding you want to do and how adventurous you are to include sections of trail and woodland into your regular rides. Lastly, there’s the ability to fit mudguards, providing that year-round one-bike-to-do-everything-on that many cyclists increasingly desire. For many, it’s a clear reaction to manufacturers that are constantly increasing the diversity and the specific purpose of road bikes. 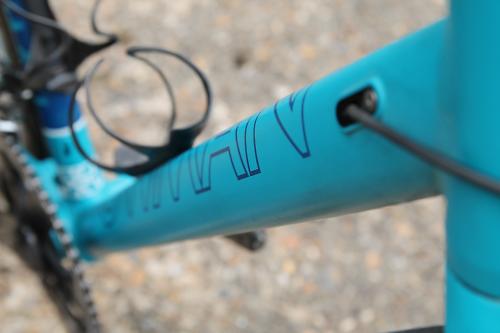 “The disc braked road bike is still a relatively new idea but one we feel has its place,” says Bowman. “That place isn’t currently on the race circuit, rather it is somewhere that allows the benefits of all condition braking reliability come to the fore: on a road less travelled. For the more adventurous cycling soul, there is often a point (or many) on a ride where small tracks, trails and rough roads are passed and you are left wondering, “where does that go?”. If you’re riding a bike like the Pilgrims, you no longer have to wonder. 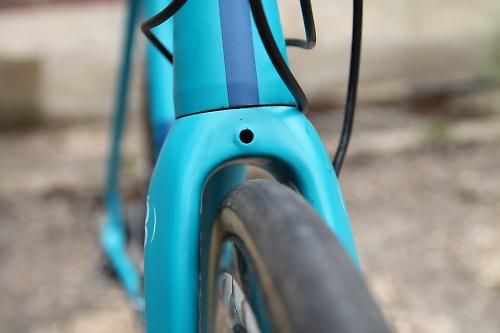 The option to run a wider selection of tyres adds an interesting and intriguing versatility to the Pilgrims that opens up your riding choices. Why stick to the road when you can mix it up with some bridleway, canal towpath or riding over the downs? It’s a trend, of adding off-road terrain into otherwise mainly road rides, that has gained a lot of popularity in the US. Bowman are calling this style of riding, which mixes tarmac and dirt, road-plus.

There are key difference in the geometry compared to the Palace, a frame designed for racing and aggressive riding. The wheelbase is a smidgen longer, the top tube a hair shorter, and the bottom bracket is lower. The down tube is massively oversized and the head tube is tapered. The seat tube is tapered too, bulging out in diameter as it closes in on the bottom bracket shell, and narrows towards the top tube, where it accepts a 27.2mm seatpost. Changes to the final production frames will include a cover plug for the Di2 port on the seat tube, and the welds will be smooth, just like on the Palace. 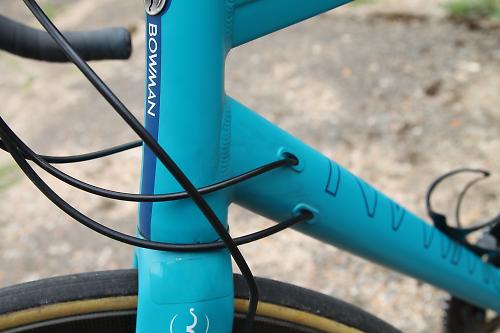 Cable routing is fully internal with modular inserts, so it’s compatible with mechanical and electronic groupsets. Full-length outer casing is used, ensuring the cable is fully sealed from the elements. The cable routing has been carefully thought out, in particular the manner in which the cables exit the bottom of the down tube. 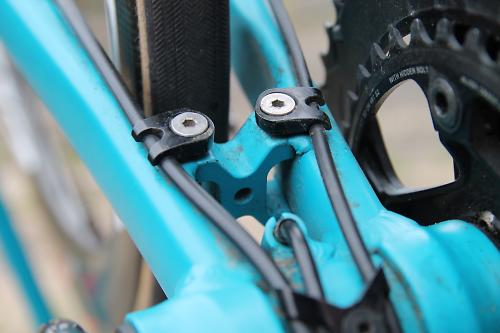 Here, Bowman uses a cable guide that bolts into the bottom bracket shell and helps guide the cables to their respective destinations. Then there’s the chainstay bridge, which as well as serving to stiffen the rear stays, also acts as a location for two cable guides to bolt into. The bolted cable and hose guides are a nicer approach than the zip ties we’ve seen many manufacturers employ, and are easily removeable. 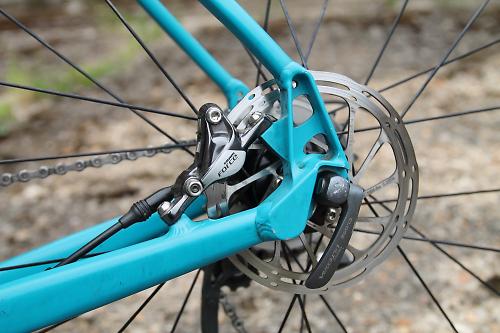 There’s space for mudguards, and Bowman has considered this. The rear dropouts feature hidden mudguard eyelets, and they’re in the final stages of producing a custom 3D printed mudguard bracket that will fit onto the seat stays and simply clip into place, and be easily removeable. For the fork there will be a similar solution, as there’s no integrated eyelets on the carbon fork yet. There are currently very few options for a fork that accepts disc brakes and mudguards and has clearance for big tyres with a shorter axle-to-crown height than a cyclocross fork, but Bowman are working on a solution.

“Ride with Spirit” it proudly says on the top tube and seat stays. From even this one ride, certainly not long and varied enough to draw a conclusive verdict, it’s clear that is the case, as Bowman has got one thing very right: the handling. The longer wheelbase gives the Pilgrims a good stance on the road, or dirt, and the steering is fantastically direct. It’s a very involving and exciting ride. 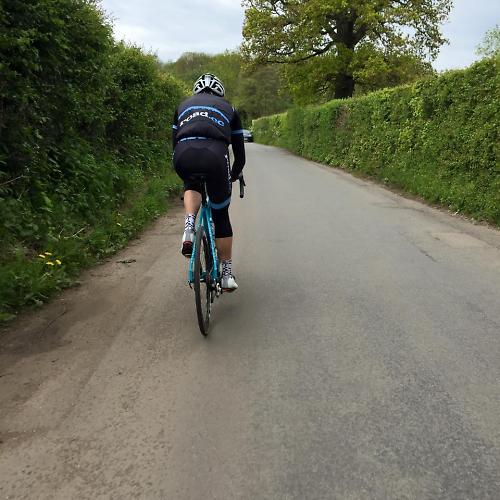 And it’s fast. There’s a real snap to the way it accelerates and the responses are immediate. It buzzes along the road with pace easily achieved, the frame displaying abundant stiffness to turn your energy into forward momentum with great efficiency. Pedalling out of the saddle and pushing hard on the handlebars shows there’s no detectable twist or squirm through the frame and fork. 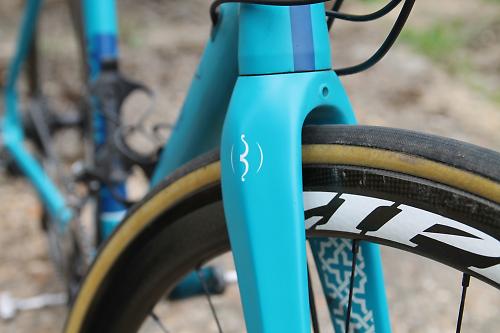 The aluminium frame stops short of being harsh. Aluminium frames are much crisper in comparison to a good carbon fibre frame, but advances in manufacturing have narrowed the gap. Today aluminium frames are exceedingly good. It’s firm and direct, the carbon fibre fork is a good companion to the frame, and there’s plenty of feedback through the tyres and contact points. But yet it’s composed enough to settle into a comfortable canter on the road, buzzing along at 30kph quite happily, but show it a bit more energy and it flicks into life and darts from corner to apex with fizzy excitement.

The geometry works. It’s great on the road, where it simply feels like a very good road bike, of a similar endurance mould to the Cannondale Synapse or Canyon Endurace. A good length provides a comfortable fit, and the head tube isn’t massively tall. Take it away from the road and into the woods, and it pops and boosts along the trail with the capability of a lightweight 29er mountain bike. The quick steering at the hydraulic disc brakes allow plenty of fine control. The Pilgrims crosses ground, whether road or dirt, with surprising speed and ability. 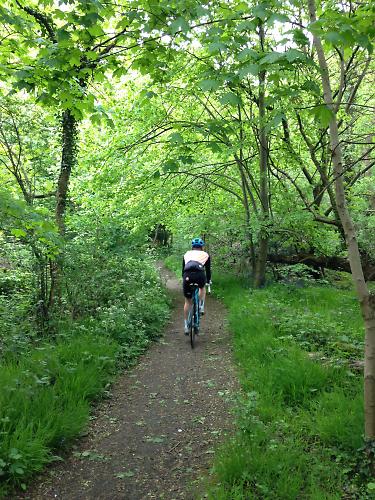 Obviously one ride isn’t enough to pass full judgement, we’ll have to wait until we get a frame in for a full review to really put it through its paces. Still, it’s clear Bowman has succeeded in creating a very capable disc road bike with the versatility to be a pure road bike, or one that, with careful tyre choice, could be used for more adventurous riding. It’s light, fast and responsive, and just like the Palace, it’s keenly priced. 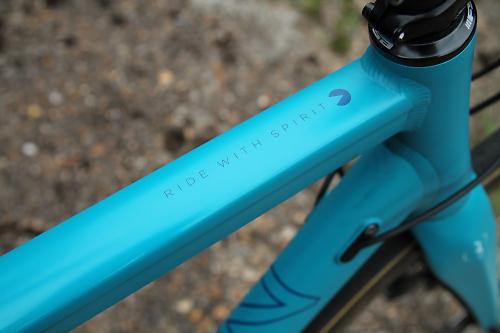 The Pilgrims is currently available at a special pre-order price of £675 until Monday 18th May, with a week for delivery. Full stock will be arriving in just over a month when the frames will retail for the full price of £750. Bowman don’t do complete builds but they do have a growing network of dealers that’ll happily do a full build for you.