Spin London got underway in London yesterday, the self-proclaimed ‘festival of urban cycling’ bringing together a wide range of companies, big and small, showcasing everything from bikes, clothing, bags and accessories. road.cc went along to check it out, and here's a quick roundup of some of the most interesting bikes on display. Most of the bike brands on show were small independent frame building businesses, but Canyon was the notable exception. This is one of its new Urban models, and the most interesting part is the integrated stem that sits flush with the top tube. It uses the split VCLS seatpost from its Endurace road bikes to provide comfort, a useful addition on London's potholed roads. 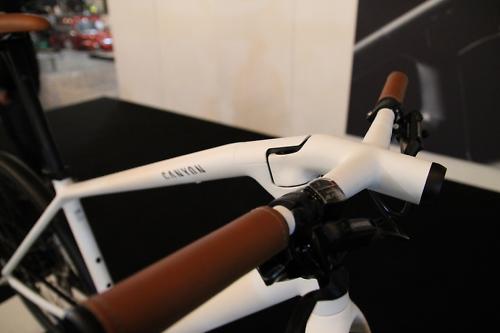 The German direct-sales company launched its first range of commuter and urban bikes last year, and at the show was displaying the three bikes in this new range. There are several models split into Urban and Commuter series - the white bike above is a Commuter model with a belt drive, gear hub, mudguards and dynamo powering integrated front and rear lights. It's ready for the commute from the box. 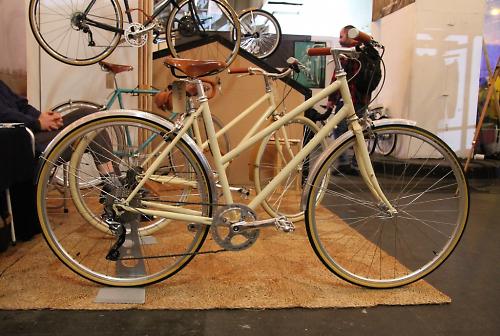 Temple Cycles take the same direct-sales business approach as Canyon, but work predominantly in steel and build bikes tailored specifically to a customer's exact needs. The finish of the bikes is quite exceptional. Without a doubt, this Shiny Demon low-pro time trial bike by Velowland, fully equipped with Campagnolo components and disc wheels, being shown by Vélowland from the Netherlands, was turning the most heads at the show. It was quite tricky to photograph simply because there were always so many people hovering around it. If you thought the Shiny Demon was impressive, the same company was also showing this striking bicycle design. I’m not really sure where to start to be honest, so I’ll just leave you to draw your own conclusion. It's called the Viks Copperhead, and is made from steel and the unique finish is created by giving it a layer of copper. 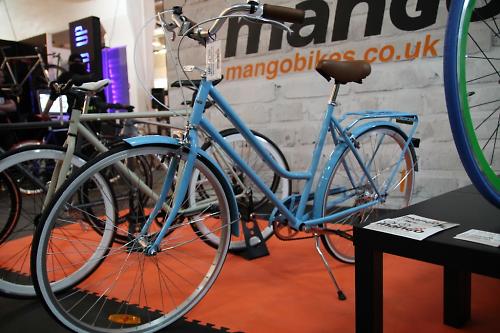 Mango Bikes is a small company that started out in 2012 offering customisable singlespeed steel, but 2015 is set to be a big year as it used Spin to showcase several new bikes. For a start there’s this lovely women’s urban bicycle, available in several pastel shades with colour-matched mudguards and leather saddles. 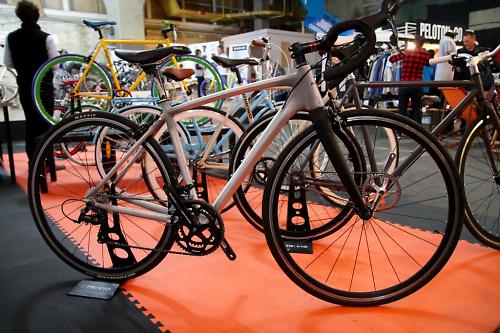 The company has worked mostly in steel, up until now, it has also been busy working on its first aluminium road bike. It’s still a prototype at the moment, hence the naked appearance, but one benefit of the lack of paint is that it allows us to see the high quality of the construction. The smooth welds around the head tube are sure to give the bike a slick appearance when it is painted. There’s a high amount of profiling and hydroforming in the main tubes, the cables are internally routed, and Mango has developed its own carbon fibre fork (with an alloy steerer) with mudguard eyelets. This is the Gi folding bike, it’s not yet available, it’ll be on Kickstarter soon. It was getting a lot of attention at the show though. 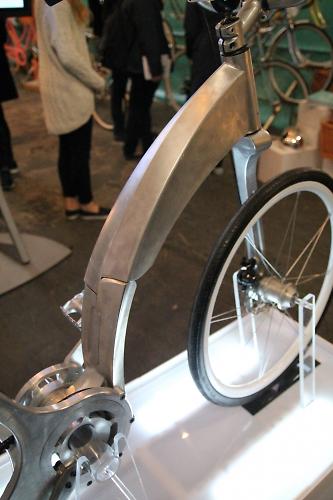 The company behind the bike reckons it’s one of the lightest and easiest folding bikes on the market, and folds in just three seconds. I wasn’t able to give it a go, it was secured pretty firmly to the stand. 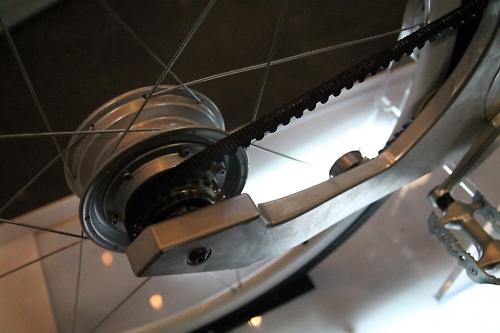 There’ll be an e-bike version with a 40 mile range as well. Belt drive keeps maintenance to a minimum. Post Workshop are a relatively new custom frame building business. The frames are hand finished in their in-house paint shop, and judging by this frame the company has a strong creative flair. 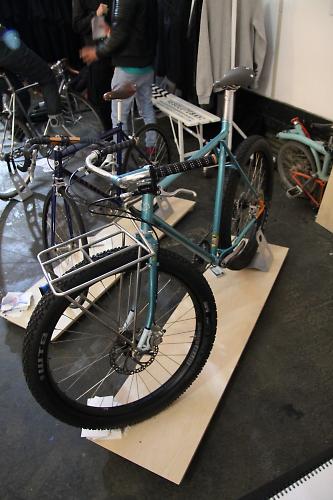 This is the ‘Porkeur’, a custom bike built by Hartley Cycles for photographer Camille McMillan. This isnt' the first time it's featured on road.cc in recent weeks - it also caught our eye at the Bespoked Bristol handbuilt bike show where it won the Best Utility Bike award. 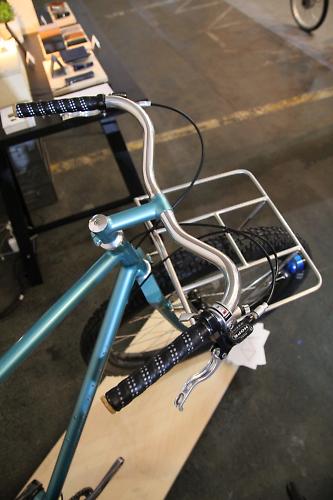 He wanted a bike he could use to transport his photography equipment around his home in the Pyrenees, so it’s got a rack up front and is built up with mountain bike components, including the big fat tyres, bolt-thru axles and mountain bike drivetrain and Hope disc brakes. 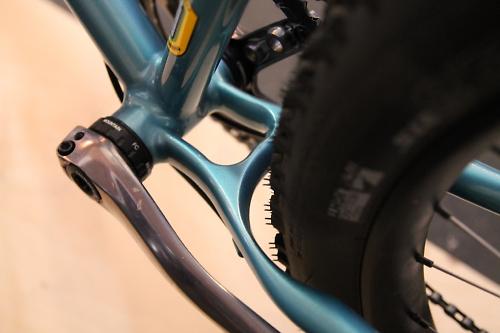 Hartley Cycles have expressed their creativity with some beautiful flourishes, the seat bridge stands out as one example. 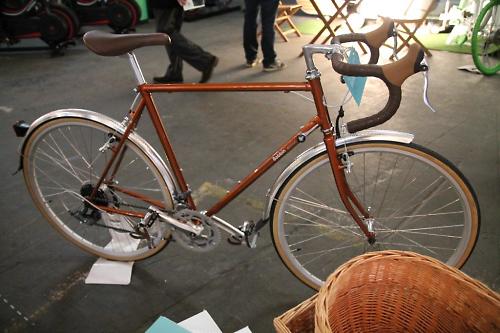 Bobbin Bikes had probably had the nicest bicycle collection on show. This Scout (above) looks just lovely, it's a retro steel touring bicycle with a lugged frame and classic down tube shifters and mudguards, of course. 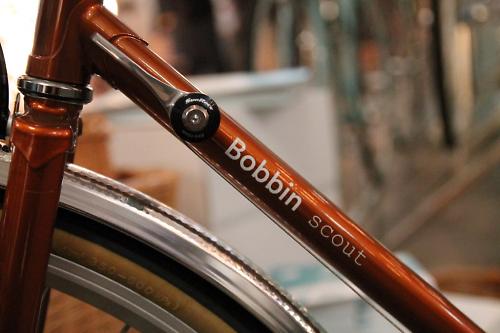 You don't see many road bikes with down tube shifters these days but with growing interest in retro bikes and events like Eroica Britannia growing in popularity, expect to see more in the future. 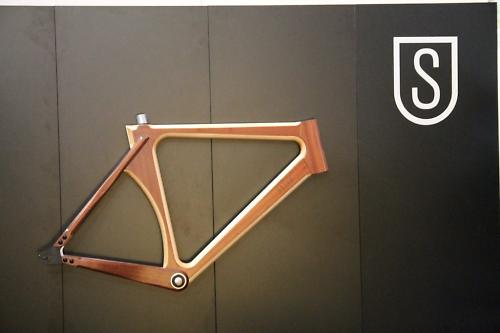 There’s a definite trend for bicycles manufactured from wood at the moment for some reason. This is the Selva, a bike that fuses modern technology with traditional work working skills. It has modular dropouts so you can run it singlespeed or geared. 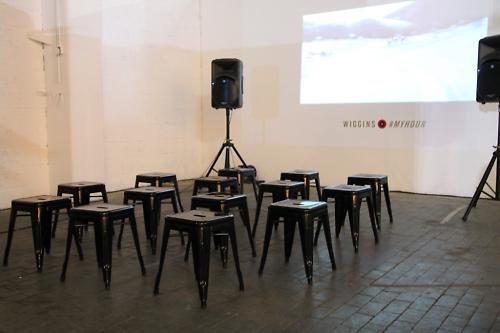 There's more to the show than just shiny and wooden bikes though, there will be shows, screenings, talks and seminars throughout the weekend. 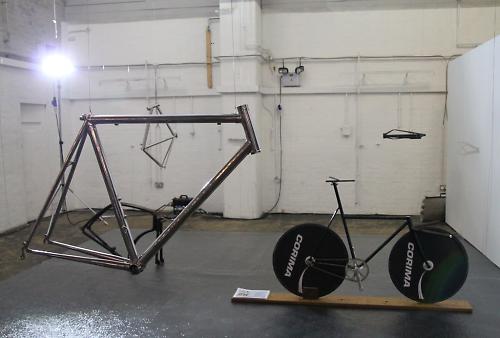 There's also a hall of frame showcasing some mighty fine creations. Shame you can't get closer to them though. 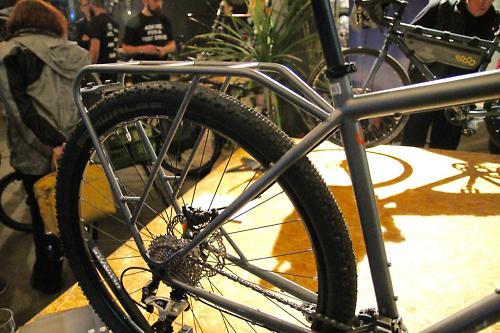 The nice thing about Spin is that you get to see the unexpected. Such as this frame with a fully integrated rear rack. That's not something you see very often, you have to be certain you want a permanent rack on your bike before you order this frame. 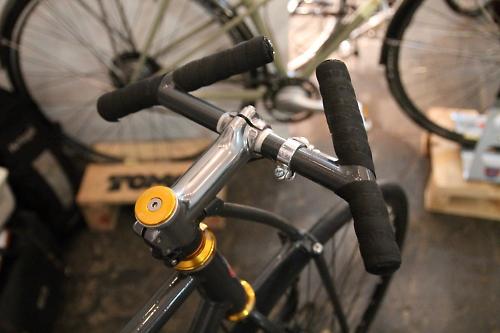 Handlebars too wide. This Tomo had the shortest handlebars on display. Doesn't look very comfortable. 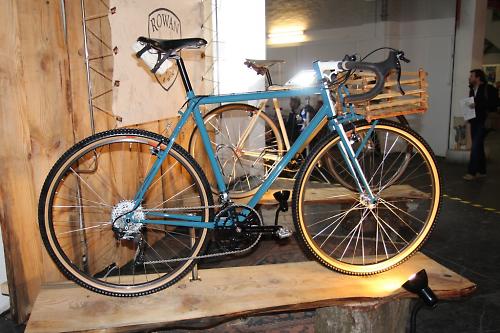 This is the Rowan ’Do-It-All’ that won the Best in Show award at Bespoked recently. And I think it's probably my personal best in show at Spin. 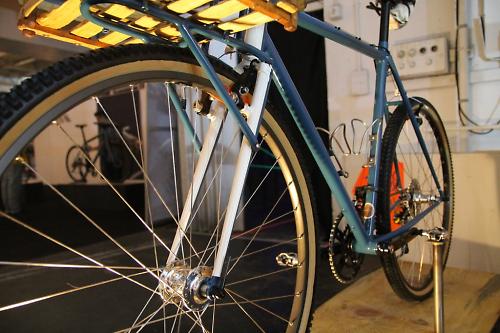 Smart details abound, from the bug tyre clearance and even the tyre choice, the front rack, the cable routing, it's just stunningly put together. 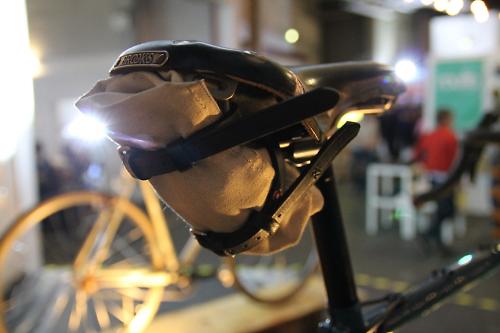 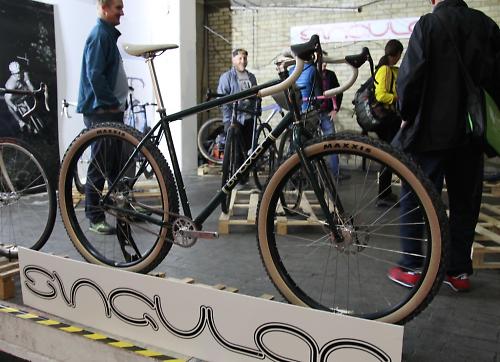 This Singular looks like a right old mash up (in a good way) between a mountain bike and a road bike, with drop handlebars and big mountain bike tyres. 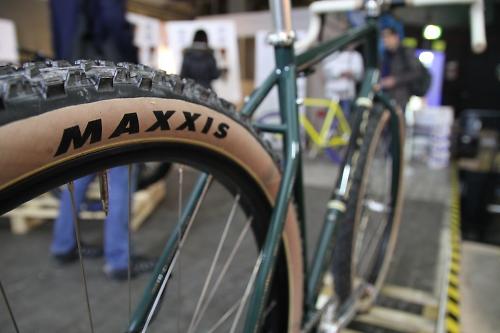 And that's more or less what it is. The model is the Gryphon and is basically a 29er mountain bike with drop bars and a rigid gork, and can be run in the singlespeed configuration you see here, or a conventional geared bike. It looks liek a huge amount of fun, we definitely want a go. Please Singular.

More from the show soon. http://spinldn.com