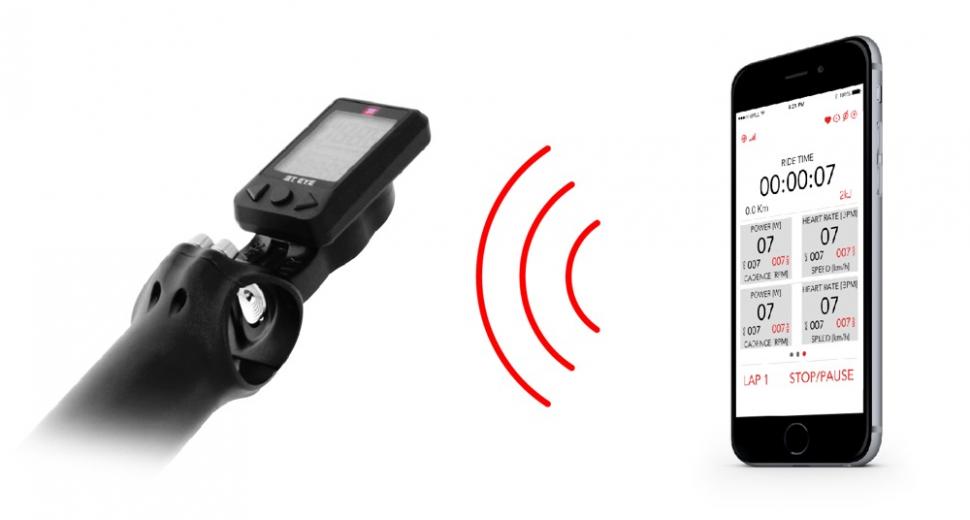 3T has launched a miniature display called Eye that puts real-time data from a smartphone training app and ANT+ power, heart rate and cadence devices onto your handlebars.

Essentially, the idea is that the 3T Eye harnesses the power of the smartphone in your pocket and displays it on the bars, along with the data from other ANT+ devices that you might have.

“Until now, monitoring [a smartphone’s GPS functionality, a heart rate monitor and/or power meter] has meant using two devices, an ANT+ monitor on the bars and a smartphone,” says 3T. “Most riders usually put the smartphone in the jersey pocket because it’s a high-value device that they’re reluctant to expose to weather and accidents by mounting on the bars.”

“3T Eye solves the problem by combining both devices into one lightweight, low-cost monitor screen that can be safely fitted to the bars, in the rider’s line of sight.”

The 3T Eye gets GPS positional data from your smartphone via Bluetooth 4.0. It fits to a Barfly 2.0 mount, and 3T also offer a faceplate adaptor for using it with an ARX II stem.

As well as allowing you to keep your smartphone safe in your pocket, the 3T Eye means you can keep your phone’s display powered down to extend its battery life.

The brain of the system is the free 3T Cycling app that lives on your smartphone and allows you to get the most out of the 3T Eye. It lets you replay power and GPS data and access cloud services.

The iOS version is available at the Apple Store now and an Android version is coming to the Google Play Store soon.

If you like, you can simply use the 3T Eye as a standard computer headunit, displaying data from any ANT+ devices you are using.

If you prefer, you can use it in Smart Bridge Mode. This means it will read data from an ANT+ device – a Garmin heart rate monitor, for example – and send it to your smartphone via Bluetooth.

The third and final mode is Smartphone Mode. This is when it works as a mirror display for a smartphone running the 3T Cycling app.

A limited number of 3T Eyes will be arriving at www.i-ride.co.uk in the next week or so. They’ll be priced at £99.99.