But is packing heat on a ride such a good idea?
by John Stevenson

At first glance this multi-purpose women's jersey looks ideal for summer cycling with its rear pockets, high collar to keep the sun off and drawstring waist tie to flatter the female figure. But look a bit closer and there's capacity for an, erm, unusual accessory: a concealed pocket for a handgun.

"Only in America" you're probably thinking, and you're right. Manufacturer Concealed Carrie specialises in fashionable handbags designed to make it easy to tote a handgun. This is their answer to the problem of packing heat while cycling, walking or running. 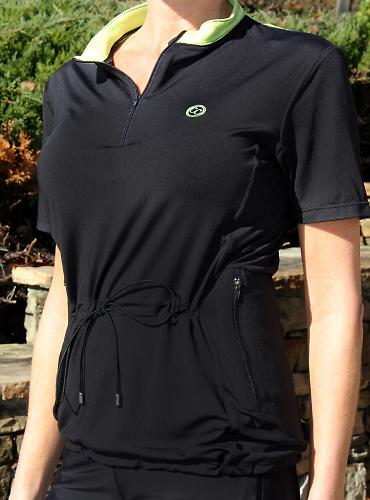 The makers says: "The Concealed Carrie Athletic Top is for women who want the opportunity to protect and defend themselves while enjoying the great outdoors."

As well as the obvious pockets there are Velcro lined, ambidextrous concealed carry pockets below the breast bone. Concealed Carrie says these allow "for free range of motion, safely and securely store a handgun, Taser, pepper spray or similar self-defense product".

Carrying a handgun so you can retaliate when threatened on the roads has a certain attraction, but it's not wthout its risks.

Earlier this month a man in St. Petersburg, Florida accidentally shot himself dead while riding a bike. Troy Earl Smith was found by a bystander who called police after seeing him fall from his bike.

St. Petersburg Police spokesperson Michael Puetz told Guns.com that Smith did not have a permit for the .38 he was carrying in his jacket, and police did not know why he had the gun.

The gun was fired while still inside Smith's jacket, which could indicate he was reaching for his cell phone or some other item in the same pocket, Puetz said.

Puetz told Guns.com that what Smith did “wasn’t the safest methodology” for carrying a gun and advises against pocket carrying.

The Concealed Carrie  Athletic Top - tagline 'Stay active and protected' - comes with a removable, adjustable holster, which Officer Puetz might approve of.