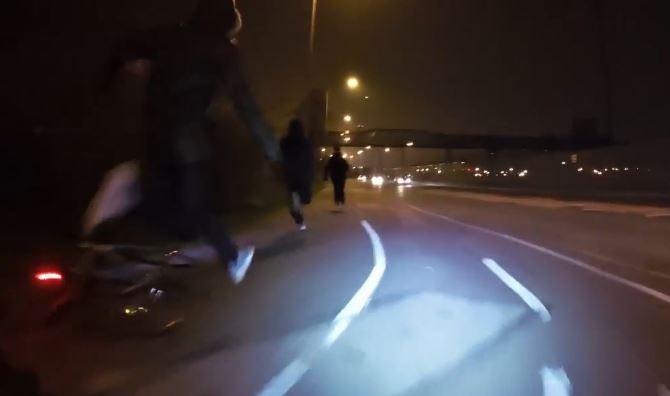 Bike recovered after two other cyclists give chase, but police still looking for suspects
by Simon_MacMichael

Video footage has emerged of a cyclist giving chase to three men who had assaulted a man in east London to steal his bike.

Alex Sweeting, who forwarded a link to YouTube footage to road.cc, shouts at the three men, one of whom is pushing the bike along, to stop.

As he continues his pursuit, the one with the bike decides that escape should be his priority and drops it, with one of his two companions hurdling it as it crashes to the ground.

The cyclist, a 53-year-old man, was punched and pushed off his bike during the incident, sustaining a bruised elbow and hip, but police have so far been unable to track the suspects.

Prior to the attack, the rider had noticed the three men walking on the pavement and as he drew level, one charged at him without warning, knocking him from his bike.

Two other cyclists gave chase to the assailants, who ran off, leaving the bike behind them.

All three of the suspects were described as being around 5 feet 8 inches in height and were wearing black clothing.

Two were said to be black – one wearing a puffer coat – with the other possibly being Asian, and they are thought to be aged between 18 and 25.

Anyone who has information about the incident is asked to contact Waltham Forest police on 101 or the charity Crimestoppers, anonymously, quoting reference number 4905428/15.

Last week, the founder of a charity that aims to reduce violence among young people warned that so-called “bikejackings” – a mugging in which the victim’s bike is taken – are becoming increasingly common, with youngsters often targeted.

Last month, 15-year-old Alan Cartwright died after he was stabbed while riding his bike on Caledonian Road in Islington, North London, with the two friends he was with having their bikes stolen during the same attack.