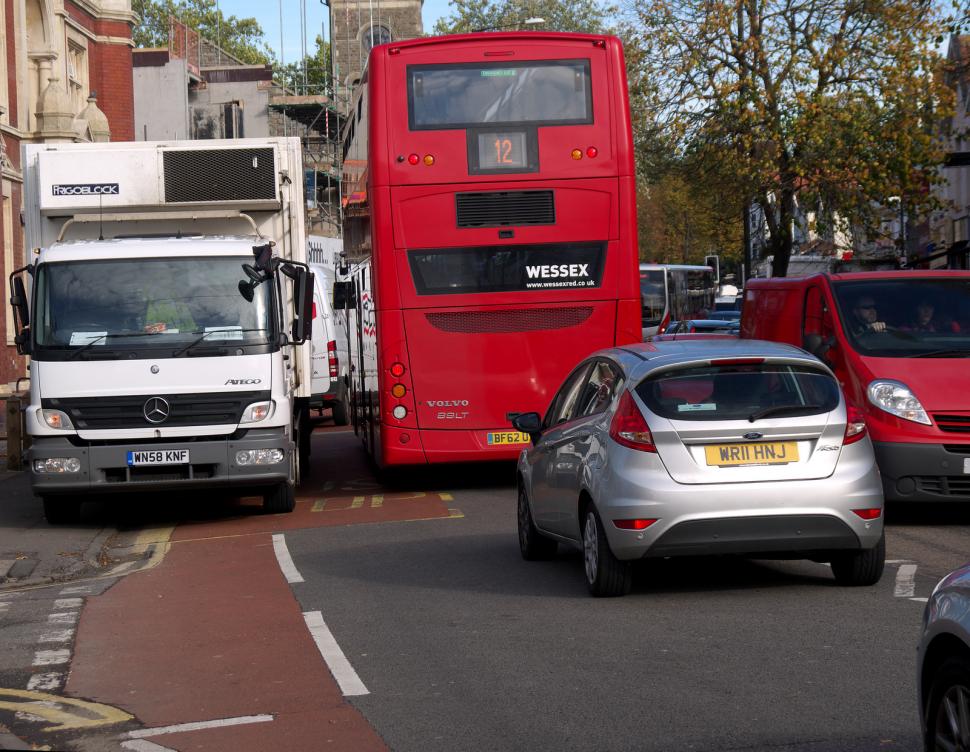 A graduate student from Bristol is waiting for an apology from bus operator First after being "nudged" off her bike on the city's notorious Gloucester Road by a bus driver who drove away after hitting her.

Tom Morris of the Bristol Post reports that police are investigating the incident in which Fiona Weidberg, 27, was hit twice by a number 76 double decker bus, leaving her in the road.

Ms Weidberg, who is enrolled as a Doctor of Educational Psychology student at the University of Bristol, told the Post she looked up expecting to see the driver stop the bus, but instead it carried on, even though people were signalling for it to stop at a nearby bus stop.

She said: "I was riding along when a double decker came alongside me and hit my handlebars.

"I was off-balance and then it came towards me and struck me again – this time knocking me off.

"There was a bus stop just in front of me and I assumed the bus would stop but it just drove off.

"I presume it was not deliberate but the driver didn't stop and they should have done."

Ms Weidberg called First after the crash to complain and was unimpressed at their response.

"I called them and they made me feel rude for complaining about being knocked off my bike," she said. "I'm lucky that I escaped with cuts and bruises. One person said any closer and it would have been a fatal accident."

Her account was supported by witness Dean Fuidge who was at the bus stop when Ms Weidberg was hit at 9.40am on February 26.

He said: "I didn't see the first contact but I saw the second. The bus swerved towards her and the next thing I know she was in a pile in the road.

"Genuinely, I don't know how she wasn't killed.

"Myself and a man who had been waiting at the bus stop rushed to help her. She was tangled up in the bike.

"She was in a right state. Police were asking me if I got the bus's number plate but our main priority was to get her out of the road so she wasn't hit by anything else.

"I took her into the shop and she was shaking and crying. We gave her a cup of tea and I got a medical kit because her trousers had been badly ripped.

"She stayed for a good hour before she was OK."

Mr Fuidge confirmed that the driver had carried on without stopping.

"There were people at the bus stop with their hand out signalling for the bus to stop but it continued."

A First West of England spokesperson said: "We are aware of a complaint made by Ms Weidberg regarding an incident on February 26. Our customer service team have been investigating it and plan to write to her in the coming days regarding the outcome of this, and offering an apology for the distress caused.

"In addition we have written to her, providing the details of our insurance company to enable her to make a claim for damage to her bike should she wish.

"Such incidences between buses and cyclists are thankfully rare.

"Over recent years we have worked hard to improve relationships in this area, working with our drivers to highlight the needs of cyclists, and with cyclists to give them greater understanding about what buses are likely to do, too.

"We have also trialled new technology on our buses, which provides an audio alert to drivers if cyclists appear in their blind spots."

That system, Cycle Eye was planned to be deployed on buses on Gloucester Road.

Conflict between bus drivers and cyclists in Bristol is nothing new. In 2012 bus driver Gavin Hill was jailed for 17 months for "using his bike as a weapon" when he deliberately hit cyclist Phillip Mead.

A First driver was involved in this incident reported on the road.cc forum. Our editor, Tony Farelly, reports his own experience with an aggressive First driver in a comment on the that thread. Those incidents took place some years ago; it's to be hoped First's work with its drivers has improved matters.

Last year Bristol City Council received two conflicting petitions regarding the allocation of space on Gloucester Road. A petition calling for uninterrupted cycle lanes along the busy main road got 563 signatures, while one calling for more liberal parking regulations got 151.