Consultation on Portsmouth Road closes this Wednesday, but paint replaces segregation for most of route
by Simon_MacMichael

A former councillor who led Kingston Council’s successful £32 million bid to turn the London borough into a ‘Mini Holland’ says revised plans for a cycle lane on Portsmouth are “very different” to those originally envisaged, with full segregation dropped in favour of a painted line.

The new proposals have also been criticised for not giving enough space or protection to cyclists.

The borough was awarded the money in March last year, two months before Simon James, its former lead member for transport, lost his seat as control passed from the Liberal Democrats to the Conservatives in May last year, reports Yourlocalguardian.co.uk.

The council is running a consultation until next Wednesday 18 February on the current proposals for Portsmouth Road, one of six Mini Holland projects in the borough. Only around a quarter of the route will be segregated.

Most of that will be through a planted verge running between the cycle lane and the main carriageway, the remainder through a lighter form of segregation using ‘armadillos’ – similar to cats’ eyes, though larger.

That leaves most of the route separated from motor traffic by a painted white line as shown in the artist’s impression above. A picture released as part of the original bid suggested a very different style of infrastructure. 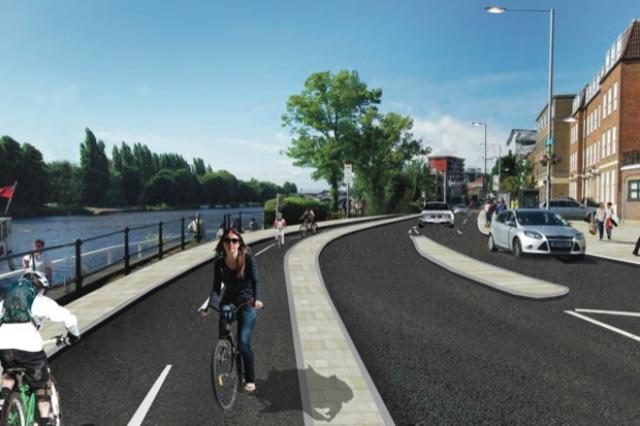 Those lanes will be between 1.5 and 2.0 metres wide, with the main carriageway between 5.50 and 6 metres wide for two-way motor traffic, causing concerns that vehicles would be travelling no more than half a metre from the cycle lane.

“I have seen a couple of images and it looks very different to the original scheme we had planned,” said Mr James.

“We planned 100 per cent segregation for cyclists,” he added.

However, the Mini Holland project’s benefit and realisation manager, Richard Lewis, defended the new design, saying: “Great change is made in small ways. In my opinion a lot of cycling schemes have been over-engineered.

“Studies have shown that removing the central line in the road makes drivers pass cyclists much more slowly.

“Having said that, everyone has to remember we are still at consultation stage and we are here to listen to residents’ concerns and bend to them. At the moment what we are hearing is that people want more segregation.”

Acknowledging that Transport for London (TfL) will need to give the final go-ahead, he added: “We are also at the mercy of TfL and Andrew Gilligan [the city’s cycling commissioner] always wants more segregation for cyclists.

“They are providing the money and if they say jump we will jump.”

Last month, when the consultation opened, Jon Fray, co-ordinator of Kingston Cycling Campaign, said: “We were led to believe that there was going to be some sort of barrier between the cyclists and traffic, but now it is just a white line.

“This scheme is supposed to encourage people to cycle and ease congestion but they won’t do that if they don’t feel safe. Our main concern is there is not enough protective space for cyclists.

“The council is certainly not presenting a Holland-style cycling space at the moment. Cyclists want complete segregation to feel safe. If this is how the council is treating the first phase, we don’t hold out too much hope for the other phases.”