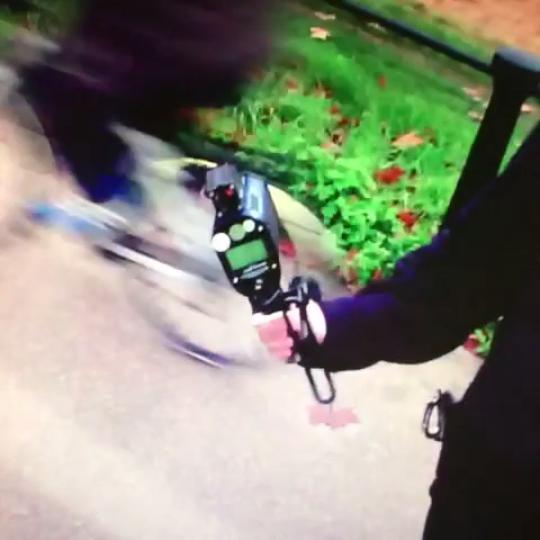 An officer shows Jeremy Vine the radar gun as other riders pass by.png

Riders asked to adhere to 5mph limit for motor vehicles, but don’t necessarily break law if they don’t
by Simon_MacMichael

There is no speed limit for cyclists in London’s Royal Parks, the organisation has told Jeremy Vine. The BBC Radio 2 presenter was stopped yesterday in Hyde Park by a Metropolitan Police officer, who told him that he had been clocked riding his bike at 16mph, against what he said was a speed limit of 5mph.

The broadcaster, who yesterday posted a short clip of the officer stopping him on Twitter’s video-sharing network, Vine, today shared a response he had received from Royal Parks shortly before going on air to discuss the issue.

Among other things, he was told that “there is no legal speed limit for cyclists in tHyde Park,” but cyclists were requested to adhere to the 5mph speed limit that applies to motorists on the path he was on, “even though [for bike riders] it is not a legal limit.”

It added that the police operation that saw Vine stopped yesterday “is an occasional thing” and accepted that “signage can be improved.”

Royal Parks also pointed out that “a criminal offence occurs when someone intentionally or recklessly interferes with the safety … of any person.”

.@london_cycling This response from the Royal Parks @BBCRadio2 may clear confusion - we are about to discuss it pic.twitter.com/TnfglC8fdN

Vine’s supposed transgression yesterday was the subject of a Pugh cartoon in today’s Daily Mail, with the presenter tweeting a link to it following his show today.

Thanks for all the comments about cycling in parks which I have read carefully. pic.twitter.com/lpY3vgMuFi