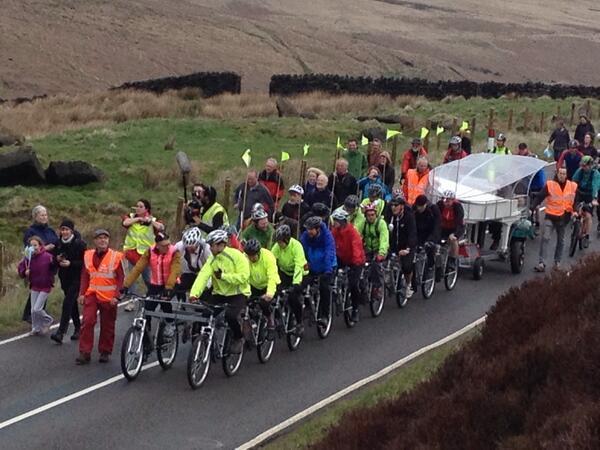 After the Tour de France, it's the Lord Mayor's Show for Yorkshire's cyclist-towed piano

A grand piano that was towed up Cragg Vale in Yorkshire by a team of cyclists ahead of July’s Grand Départ of the Tour de France will be pulled through the streets of London on Saturday as part of the Lord Mayor’s Show.

It took 18 cyclists to pull the instrument plus a pianist up what at six miles is England’s longest continuous climb back in April as part of the Yorkshire Festival which saw arts and cultural events around the region in the 100 days before the race started in Leeds.

Called the Grand Departs, the work was a collaboration between Doncaster’s Imove Arts and the Hebden Bridge Piano Festival. The rig that tows it is called the Pianoporte and was designed by sculptor Andy Plant.

According to The Yorkshire Post, Saturday’s outing in London will again feature 18 cyclists towing the piano, with David Nelson his Piano Cycle composition as they head through the capital’s streets.

Grand Departs Producer Elenid Davies said: “Imove and Hebden Bridge Piano Festival were very proud to be a part of the celebrations in the lead up to the Tour de France, and we’re chuffed to bits that The Grand Departs will be representing Yorkshire in this year’s Lord Mayor’s Show in London.

“After conquering the longest continuous hill in England, pedalling the PianoPorte through the streets of London will be a breeze!”

The man who oversaw the successful bid for the Grand Départ, Welcome to Yorkshire’s chief executive Gary Verity, said: “There is little doubt that the streets of London will have never seen anything like this!

“The Grand Departs was one of the stars of the Yorkshire Festival in the run up to the Tour de France this year, and seeing a Grand Piano being pulled along London streets by cyclists will be a spectacle to behold.”

Details of the Lord Mayor’s Show, which sees a procession of floats and bands head from Mansion House to the Royal Courts of Justice and back, can be found here.