As well as lending us their esoteric Fargo – look out for a test soon – the boys at Salsa have been busy with a brand new bike, the Vaya. Dubbed as a 'road adventure' bike, it looks set to be a very versatile machine. It'll be available by the end of March with a price tag of £1350

Salsa have been making bikes from True Temper tubing for a while now but since they went bankrupt last year Salsa have had to look at their options, and what they've decided to do is oversee the production of their own custom-drawn Cromoly tubesets, which are manufactured in Taiwan. They've tweaked the profiles of the tubing so that the new frames will pass the CEN tests, and the new steel is used to make the Vaya. 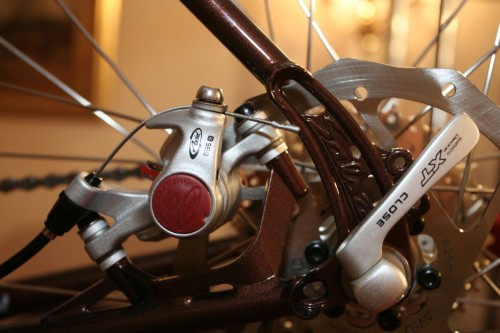 Salsa are describing the Vaya as a successor to the La Cruz disc-equipped 'cross bike from last year, but where the La Cruz was limited in terms of the options for mounting racks and guards, for example, the Vaya is a much more versatile machine.

The Vaya borrows quite heavily from the design language of the Fargo – it includes the Fargo's disc-ready dropouts, for example – and the bike is well-endowed with braze-ons including double eyelets for racks and guards, and low-rider bosses on the front fork. The geometry has been tweaked to give a lower bottom bracket for good stability, and a long head tube for a nice upright riding position without a big stack of spacers. 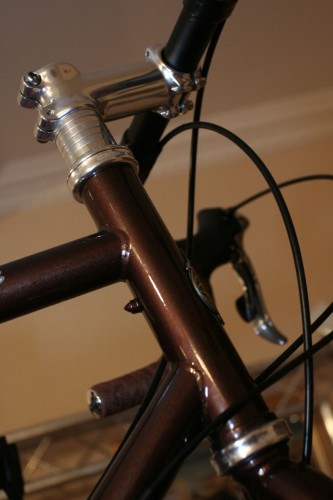 Gearing is a compact chainset with an 11-32 cassette and long-cage LX rear mech as standard, but if you needed extra climbing gears for loaded touring you could easily fit a triple. The bike comes fitted with Avid's BB-5R mechanical disc brakes that are designed to be used with road levers, Shimano Tiagra STI units in this case. If you're off into the great unknown on the Vaya you may well be tempted to swap them out for something a bit simpler, like the bar-end units the Fargo uses. It'll run up to a 43mm tyre if you're off into the wild places. Salsa have also been busy with the Casseroll, now in its third year, which they describe as a 'do-it-all road bike'. It could also be described as a 'lightweight tourer', although Salsa in their coolness weren't quite prepared to accept that it was basically an Audax bike. That's no bad thing in our book though.

Anyway, the triple-equipped version and singlespeed share the same frame, which has a traditional forward-facing slot dropout, complete with limit screw, which at 46mm easily allows for enough chain length adjustment if you're on a single cog. Like the Vaya the bottom bracket is lowered slightly for better handling when loaded. The slightly dropped top tube design (a 3cm drop front to rear) gives the bike a fairly classic look while still retaining a bit of extra standover height. The Casseroll, like the Vaya, has a full complement of braze-ons, though it's missing the low-rider bosses on the fork - it's more designed for a light tour. There's room enough for a 37mm tyre, or a 35mm if you're running 'guards.