Subscribe
Back to news
news
Art and design
Video 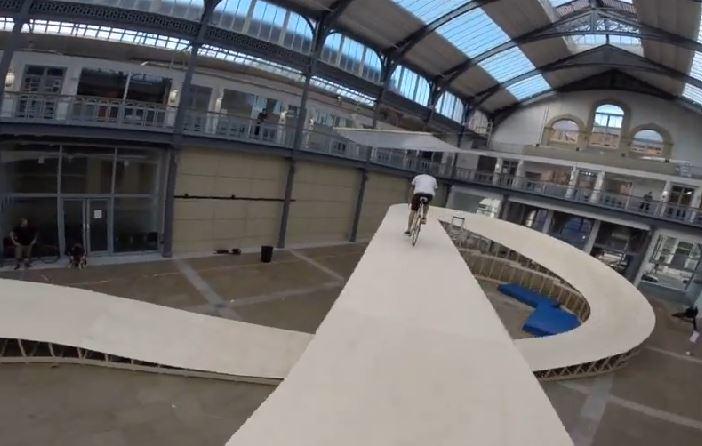 A few beers can often lead to some very bad ideas, but now and again they result in really good ones – the Ironman Triathlon is one of them, and here’s another, a figure-of-eight “human powered rollercoaster,” the result of what its creator admits was a drunken conversation in a Glasgow pub.

It’s called The Comedown, and has been installed at Wasps Artists’ Studios at The Briggait in Glasgow’s Merchant City. Its creator, artist and sculptor Stephen Murray, took a spin on it for its maiden ride a few days ago, describing it as “scary the first time,” reports Urban Velo.

The Comedown - Test Ride from Stephen Murray on Vimeo.

Murray described the process behind the creation of his work, inspired initially by the Sir Chris Hoy velodrome, which hosted the track cycling events at this summer’s Commonwealth Games.

“We started riding on the velodrome once it was built and chatting about how it was made, et cetera,” he said.

“Then the Red Bull Mini Velodrome, came to Glasgow and my mate John Silvera who is a joiner and cyclist and all round good man raced on it (and folded his wheel and went flying off the side).”

With the national arts body Creative Scotland providing grants of £14,000 each to fund 20 projects tying in with the Commonwealth Games, Murray drew up plans to build his own mini-velodrome for people to ride on while the event was taking place.

A conversation over a drink soon led to him changing his mind, however, with mention of a transportable figure of eight “Human Powered Rollercoaster” used for alleycat races in North America in the late 1990s and resurrected in 2010 for the Cycle Messenger World Championships in Guatemala as the starting point for his revised proposal.

“A week later I was in the pub with John and Brian from Rig Bike Shop which is where all the couriers work from in Glasgow,” Murray went on.

“Anyway Brian told me it was a shit idea to build a minidrome as the Red Bull one already exists etc. But he had ridden the Dunhill one in Canada back in the day and what I should do is make an eight. Which I had never heard of.”

Murray was enthusiastic about the idea, confessing, “We were all pretty pissed but I totally latched on to it.”

While funding was secured, venue problems meant that The Comedown, which unlike its Transatlantic predecessor can only be ridden in single file, didn’t appear in time for the Commonwealth Games, but with a location now secured, the opening party is scheduled for this Saturday 18 October, with the track remaining in situ until 1 November.

Heis hopeful that its stint in Glasgow won’t be the beginning and end of The Comedown’s story.

“Basically we’re at a point now if someone wanted to step in and back us financially we could go rework the design and build a demountable, raceable, transportable, figure-eight velodrome,” he went on.

“We’ve got the whole thing down. We would adjust a lot of things as this has been a massive learning curve and the difference between working in CAD and physically having the opportunity make a 30 m x 12 m x 3.6 m sculptural velodrome is massive.

“But we’ve fucking done it,” he added.

Indeed they have, and looking at the video, it’s right up there with perhaps our favourite pedal powered track that we’ve covered here on road.cc – the Shweeb cycling monorail at Agroventures Park in Rotorua, New Zealand, shown in the clip below.