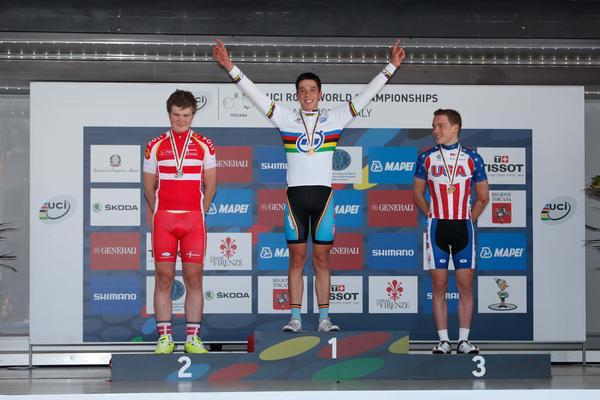 Belgian's teammates pay tribute to up and coming star of cycling world as details emerge of his death...
by Sarah Barth

The up and coming world junior cycling champion Igor Decraene has been found dead this weekend in an apparent suicide at the age of 18.

The Belgian, who won the world junior individual time-trial title in Florence last year, was in line to move to a reserve position in the World Tour outfit Omega Pharma before his death in Zulte, northern Belgium, according to the Belga news agency.

The Belgian Federation president Tom Van Damme added: "It's difficult to comment on this terrible news, it will take time."

The young star’s team, Tieltse Rennersclub told Het Laatste Nieus: "Igor couldn't wait to defend his title at the World Championships. He was hoping to land another great result at the worlds. Unfortunately that won't be the case.

The team put a message on its Facebook page saying: "It is with great pain that we announce to you the death of Igor Decraene who has been the victim of a terrible accident."

In its statement the Belgian Federation simply described Decraene's death as sudden but offered no further detail as to the circumstances. Some news agencies have reported that it was suicide but as yet no details of the incident to corroborate that have been released. More often than not news agency reports in to such incidents are accurate.

1
Don’t hang around if you want a Gore-Tex Shakedry jacket – the fabric is being retired. Plus tech news from Campagnolo, MET, Kask + more
2
Near Miss of the Day 837: Mercedes driver close passes cyclist carrying four-year-old son in child seat
3
Drink driver who ploughed into cyclist with friend riding on bonnet jailed for 14 months
4
“I don’t want to see someone die on my doorstep”: Council urged to sort out notorious zebra crossing where near misses “happen every day”
5
Cyclist found guilty of riding carelessly in crash which killed motorcyclist
6
Active travel campaigners release footage of anti-LTN vandals setting bollards alight
7
How much?! It's now revealed council spent £10,000 on "embarrassing" obstacle-packed cycle lane
8
Blind man fined for cycling while drunk after crashing into car