If there used to be one thing you could guarantee to see at Eurobike, it would be that somewhere in the vast expanse of the Friedrichshafen exhibition halls there would be at least one slightly bonkers concept bike, but the last few years have been oddly quiet on that front. Maybe everyone is too busy sticking disc brakes on their road bikes? BMC are bringing back the trend for futuristic concept bikes, with this mighty fine creation.

Is it a vision of the future? Is it how bikes might look if the UCI didn’t have such strict rules? Possibly one or both, or maybe the designers just had a bit too much spare time on their hands. 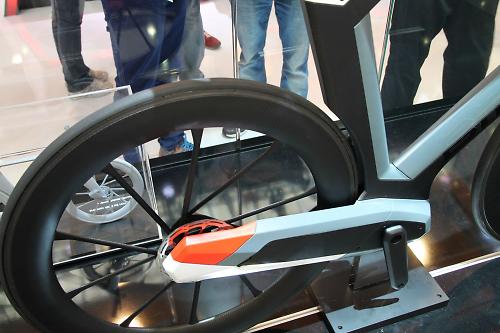 The bike was created in BMC’s Impec advanced research and development lab. Impec is the unique manufacturing process they’ve pioneered using robots, but haven’t really perfected enough for mass manufacturing of frames. So instead they’ve put it to use making this concept.

BMC weren’t giving many details away about the bike, leaving us to ponder what it might be. Aerodynamics have shaped most of the bike, especially the svelte one-piece integrated handlebar and stem with their own design brake levers and shifters. A computer head unit sits flush in the top of the handlebar and presumably controls the motor inside the frame. 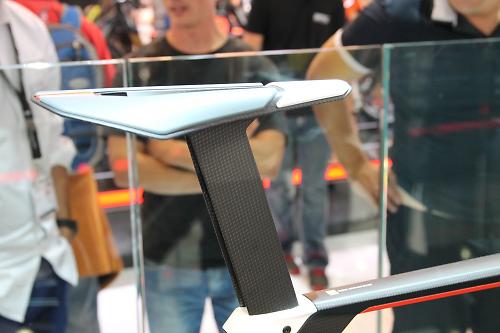 The frame features a neatly concealed drivetrain and judging by that bulge around the bottom bracket it does look like it’s packing an electronic motor and battery. It’s disc-equipped too, which has allowed the designers to chop off half the fork and rear triangle and save a load of weight. Mad it looks, but this isn’t the first time we’ve seen bicycle designers flirt with the idea of one-legged forks and a frame chopped in half.

Highly unlikely as it is to make it into production, it is conceivable that some of the ideas in this concept could be seen in future BMC road bikes in the future. Here’s hoping anyway.

1
Win! Over £500 of dhb Flashlight winter gear
2
Sir Keir Starmer interviewed by police after crash with cyclist while driving in north west London
3
Are these 30g pedals the lightest ever made? AeroLite Alpha TT-Ceramic pedals are for the weightweenies
4
Egan Bernal facing months of rehabilitation due to spinal condition
5
Fleet Street fury over campaigners' calls to clarify ‘two abreast’ cycling rule
6
Minivan passenger in Las Vegas killed as he pushed cyclist to her death
7
Giro d'Italia zip-gate. Hindley and Kelderman struggle with jacket issues on a freezing Stelvio
8
Canyon set for €500m+ private equity sale?