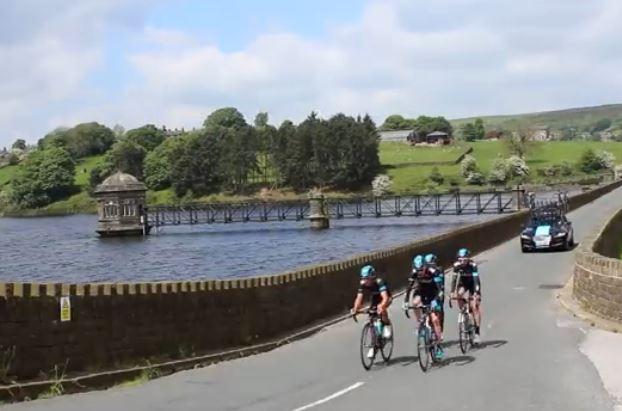 Also - photobook and exhibition on the way, Emmerdale gears up, and warning of Tour Maker "shambles"...
by Simon_MacMichael

With less than three weeks to go until the start of the Tour de France in Leeds on 5 July, here's our latest round-up of the Grand Depart news.

Earlier this month, Chris Froome and three Team Sky colleagues who look certain to make the Tour de France team – Richie Porte, Mikel Nieve and David Lopez – were in Yorkshire to undertake a reconnaissance of the opening two stages of the race, and now Sky has produced a video of the trip.

Froome, still suffering from the effects of a crash on Stage 4 of the Critérium du Dauphiné, dropped from second to 12th overall on today’s final stage after being distanced by Tinkoff-Saxo’s Alberto Contador, who had replaced him as race leader yesterday.

There was some consolation for Sky with Froome winning the points jersey, while Nieve took the stage from the break, which also included Garmin-Sharp’s Andrew Talansky; he finished fourth, more than a minute ahead of Contador, to become the surprise winner of the race after an eventful day’s racing.

A photographer from Harrogate is working on an official book commissioned by Welcome to Yorkshire to be launched in September capturing the build up to the Grand Départ and the event itself.

Besides the coffee table book, she will also be exhibiting her work later this year in Harrogate and Sheffield and at the Leica Gallery in London’s Mayfair, reports Bdaily.

The book is being designed by Harrogate-based consultancy The Lift Agency, whose clients include Mark Cavendish, and the photographer, Jude Palmer, said:  “I am delighted to be working with such a creative bunch of people at The Lift Agency.

“They totally get what I want to achieve with this project and I’m privileged that I’ve been able to work with Mark Cavendish through Antony. We’re very excited about the future – especially if Mark wins in Harrogate!”

Of the support she is getting from the German camera brand Leica, she said: "I am ecstatic that Leica is endorsing my London exhibition and my photography.

“I started out in photography wanting to become a Magnum photographer – one of the founders being Henri Cartier-Bresson who used a Leica camera - so to have Leica endorsing me means more than words can say."

Yorkshire-based soap Emmerdale has been getting into the Tour de France spirit – there will be a special episode featuring Victoria Pendleton on the eve of the start – and now it has revealed that it will also have themed 5-second ‘break bumpers’ either side of ad breaks in the build-up to the race.

They were the idea of the show’s technical co-ordinator, Andrew Whiston, who said: “I'm a keen cyclist so wanted our show to cover the Tour de France that is coming through Yorkshire.

“I realised it's harder to reflect this race in story, given it happens at a weekend and is a live event.

"So I thought about creating these special Tour de France break bumpers.”

"With the Tour de France of course colour is very important, so one of our bumpers is a washing line with different items of clothing on which mirror the leaders jersey.

“So there is a yellow top, a polka dot skirt and a green pair of trousers, which is the colour for the highest points score. There is a white shirt at the end of the line which represents the fastest young rider jersey colour,” he added.

A councillor from Otley who has volunteered to be a Tour Maker for the Grand Départ has said he is worried there could be “a shambles” after he and others were told they would be posted far away from where they live.

Councillor Nigel Francis says that means that people seeking help from Tour Makers won’t be able to benefit from the local knowledge they were supposed to bring to their role.

He told the Ilkley Gazzette: "We're meant to be 'the eyes and ears' of the event and direct people to local services and give directions, but how can you do that when you've been allocated to somewhere you don't know anything about?

"I've been given Green Hammerton, over by York, which I know nothing about. I attended the Tour Makers event in Leeds on May 24 where we were all being told how important the role was and how useful our local knowledge would be, but when I got talking to people around me they all had the same story.

"I spoke to about half a dozen people and they were all in the same boat. I'm just worried the organisers have done this across the board - I'm not sure they know what they're doing."

A spokesman for TdFHUB2014 Ltd, which is co-ordinating the Grand Départ, said: "Tour Makers were given the opportunity to specify if they had a preferred location and stage on their application form.

"Their preferences were taken into account but unfortunately not everyone could be assigned to their first choice position.

"Due to the complex nature of rostering almost 10,000 volunteers and the race day requirements, not everyone could be allocated to the positions in some of the more popular areas, or indeed as close to home as they had hoped.

"Some Tour Makers will travel both within their home county and from overseas to take part in this once in a lifetime experience," he added.

1
Cyclist on motorway pedals past sign warning of … cyclist on motorway
2
Near Miss of the Day 551: Close pass leaves cyclist in shock – driver then offers to donate to charity to stop case going to court
3
Video: Right-turning van driver crashes into cyclist – but escapes prosecution
4
Win! £1,500+ worth of Pacenti carbon wheels, alloy wheels and cycling caps with multiple prizes to be won
5
Festka marks 10th anniversary with ultra-cool limited edition bikes
6
Mathieu van der Poel's broken Canyon Aeroad bar could have been caused by collision with car, claims his father
7
Suspended sentence for cyclist filmed knocking over five year old in Belgium
8
'Incredibly talented' police officer killed after being hit by motorist while cycling