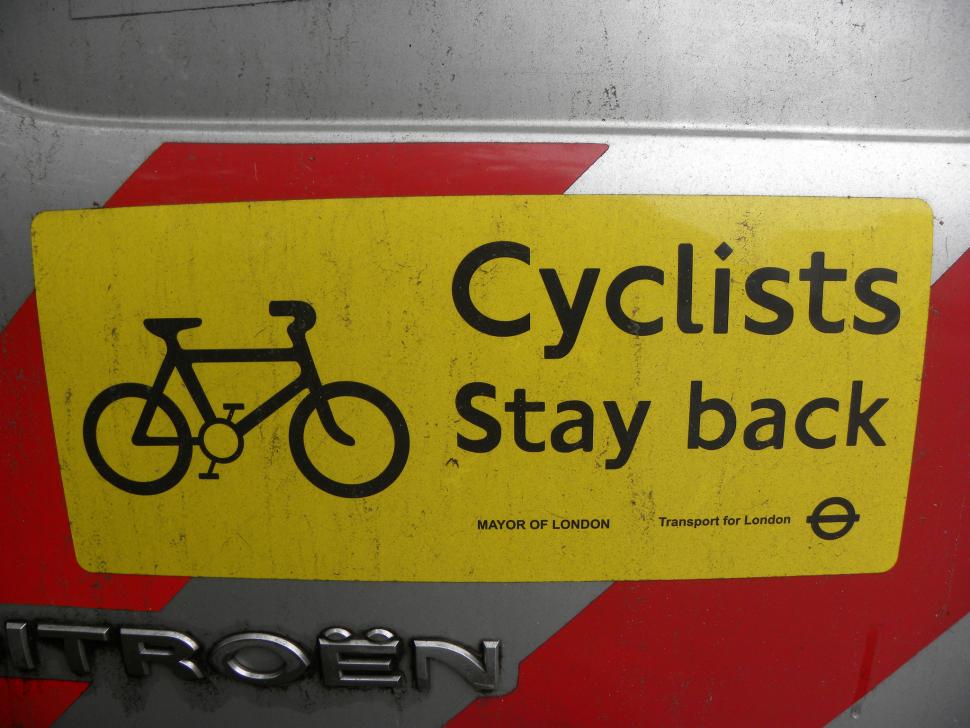 Are bad drivers using ‘stay back’ stickers as an excuse?

Transport for London (TfL) says it has no evidence that its ‘Cyclists stay back’ stickers encourage the mistreatment of cyclists on the roads of the capital. But it has emerged that in at least two incidents drivers seem to have been influenced by the stickers to treat cyclists as if they have no right to be on the road.

In a letter to Leon Daniels, TfL’s managing director of surface transport, obtained by Dr Robert Davis of the Road Danger Reduction Forum, Rob Sowerby details two incidents where drivers of buses appeared to have deliberately blocked him, and then justified it by saying he had no right to be there.

In the first incident, Sowerby, who describes himself as “Cyclist, Motorist, Pedestrian” and “an everyday cyclist who cycles a Brompton in normal work attire”, says a bus driver deliberately pulled left across him and when he protested told him to “stay back.”

Sowerby wrote: “I was cycling through the new Euston Circus interchange and down Gower Street at a good speed when a bus which was progressively attempting to overtake me pulled sharply to the left with the sole aim of intimidating me into jamming my brakes on. I was halfway down the length of the bus.

“This action was repeated until I had a hand on the side of the bus and was on the point of jumping off my bike as I was being squashed against the curb.

“I bashed on the side of the bus and passengers shouted at the driver to stop. When he did I told him what he had done and he tacitly agreed as his sole response was that I ‘stay back’. I took his picture and at that point he got out of the cab and threatened me both physically and with the police.

“His whole attitude stank from beginning to end and I believe that much of it stems from the indiscriminate use of these signs on the back of buses.”

A right to pull  in on cyclists?

Sowerby criticises Transport for London for promoting use of the stickers which he says, imply that it’s up to cyclists to avoid unsafe practice; suggest that at all times it is unsafe to cycle alongside a bus when many times it is perfectly safe to do so; and lead bus drivers to believe “that they have ‘a right’ to squeeze any cyclist the find to their left when pulling in regardless of the fact that the cyclist was been overtaken and not the bus being undertaken.”

In another incident, Sowerby was riding on Oxford Street when a bus drier pulled left to stop him filtering and then told him he was “not allowed” to ride down the inside of the bus.

“Not allowed” to ride down inside of bus

He wrote: “I was slowly filtering on both sides of stationary traffic. I filtered down the inside of a bus about 100 yards before Oxford Circus going west but absolutely nowhere near a bus stop or any other reason for a left turn manoeuvre.

“As you are aware the speeds possible on Oxford Street are dictated more by the problem of errant pedestrians than anything else so I am going at walking pace. The bus driver … decided he didn’t like it and pulled the bus over to the left as I was cycling along.

“Note I know this because I was watching him in his mirror and the act was one of pure aggression and passive violence.

“I walked down the pavement after being left with less than an inch of road to cycle on. I confronted the driver and his simple response was that I was ‘not allowed’ to cycle down the inside of his bus.

“I suggested that firstly this was not true (and incidentally would invalidate 90% of the inadequate cycling infrastructure in the United Kingdom) and secondly even if it was that his act was dangerous and could have led to injury.

“He was adamant that cyclists must stay back and he was ‘within his rights’ to stop me from filtering by whatever means. I can think of no other reasoning for this attitude but for the new signage on buses.”

Echoing points made by campaign groups such as CTC, London Cycling Campaign and Road Danger Reduction Forum, Sowerby said out that a “new attitude is being bred in the bus depots as a result of the misuse of the signage that I believe was intended for very different vehicles with restricted views such as HGVs”.

He added: “to allow your bus drivers this ‘get out clause’ has increased dramatically the safety concerns I have cycling around London.”

TfL recently claimed it had no evidence that the stickers were affecting driver behaviour in London. Rob Sowerby’s experiences suggest otherwise.

Have you been harrassed by a London driver in a vehicle with a 'Cyclists Stay Back' sticker and told you shouldn't be there? Let us know in the comments.