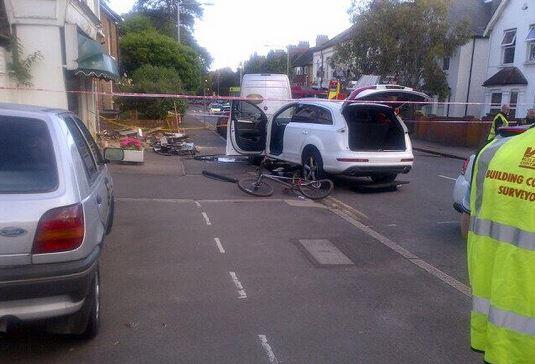 A driver in Kingston-upon-Thames is said to have aimed their car at a cyclist in a road rage incident yesterday but missed the intended target and instead crashed into a hair salon, causing extensive damage to the front of the building.

The incident took place yesterday evening at around 6pm on Park Road, around 50 metres from the entrance to Richmond Park. Local resident and road.cc site user Stuart Forrest said that word soon spread around, and he went to look at the aftermath an hour or so after it happened.

“The woman's response was completely out of proportion though because she apparently tried to drive at the bike.

“The car went out of control and appears to have completely destroyed the front of a hair salon (not a house as I'd originally said) just after it closed, before bouncing off a van and another car. The car in question is a white Audi Q7, which is local – I've seen it around, it's quite a distinctive car.

He said that there was “no sign of the rider or driver, but plenty of police and two fire engines in attendance.”

He added: “If it's true, I hope they throw an attempted murder charge at the driver. Whatever provocation there was, this was an entirely out of proportion response and she was extremely lucky that nobody was killed.”

Stuart also tweeted pictures of the scene, which show the front of the salon propped up to prevent the building from collapsing.

Another person who lives locally, Andrea Craig, also tweeted pictures of the aftermath, one of which show the cyclist’s mangled mountain bike.

Unbelievable and thankfully other than the building, the bike, a car and a van the people are ok. pic.twitter.com/KV8oSnWy51

The bike is totally mangled and cyclist ok but the car is a rightoff. My fav hairdressers Park Salon is not ok.

In a statement emailed to road.cc, the Metropolitan Police said:

Police were called at around 18:00hrs on Saturday, 7 June, to a collision between a car and a cyclist in Park Road, Kingston-upon-Thames.

The car was subsequently in collision with a hairdresser's shop.

Officers and London Ambulance Service attended the scene. The male cyclist was taken to hospital with a small cut to his arm. He was discharged that evening.

The driver of the car, a 30-year-old woman, was arrested on suspicion of attempted GBH. She was taken to a south-west London police station and bailed to return on a date in September.

At this early stage, officers believe there had been a heated argument between the cyclist and the driver while both were stationary. During the course of the dispute, the cyclist kicked the car, an Audi Q7. The woman drove the car away and was in collision with the cyclist and then the shop.

Officers from Kingston CID are investigating. Enquiries continue to establish the full circumstances.