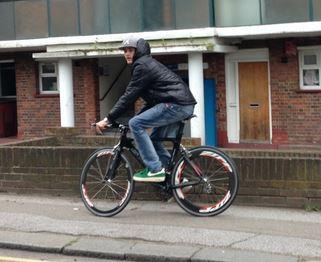 Police in South East London are appealing for help in tracing three bikes stolen from Lee Park, SE3 last week – with a youth photographed riding one of them in Hither Green at the weekend.

The 69-year-old victim, a Great Britain age group athlete, was due to use one of the bikes, at the World Duathlon Championships in Spain later this month.

The bikes had been locked in a shed in the owner’s garden at 5pm last Thursday 8 May, and at 8.30am the following morning he discovered the door was open and the bikes no longer there.

Last Sunday, the owner of a bike shop in Lee Green told police he had seen a youth riding one of the stolen bikes, a Swiss triathlon frame with deep section Zipp wheels, in Hither Green. Details of the other two bikes were not supplied.

A witness, Kate Curran, who belongs to same triathlon club as the victim, took photographs which have been widely retweeted on Twitter with the hashtag #findvernonsbike. Detective Constable Louise Mayhook from Lewisham police's Serious Acquisitive Crime Unit said: "These bikes are worth approximately £6,000, with each bike worth close to £2,000.

“The victim was to use one of them to compete in the world duathlon championships for Great Britain on 31 May in Spain.

“We are keen to trace the person in the image who is believed to have been riding around on the stolen bike last Sunday," she added. Please note we have now locked comments on this story.