Can I ride my road bike down that track? Find out with ingenious image mash-up
by John Stevenson

Route planning site cycle.travel has introduced a new feature: photographs of bike paths and trails that allow you to find out what the surface of a track is like before you set out. In short, they say, it's Street View for cyclists.

The surfaces of cycle tracks vary wildly, from well-kept tarmac and concrete to muddy singletrack. That makes planning a route that avoids roads as much as possible a bit of a lottery. This writer found himself on a rubble-surfaced Roman road recently after following a route south of Cambridge generated by CycleStreets.

If I’d used cycle.travel I’d have known that what looked like a road on the map actually looked like this on the ground: 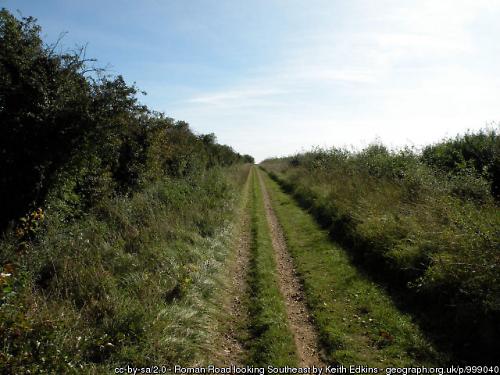 To be fair to the enormously useful CycleStreets, it actually turned a road bike ride into a bit of an adventure and if I’d bothered to scroll down the route plan I’d have found CycleStreets’ photos too.

But cycle.travel has done a really good job of implementing the photos feature. Click on a section of the route on the map and you’re offered a ‘Find photos’ option. You can therefore immediately see which sections are not on proper roads and check them out.

I’ve not explored cycle.travel in much depth, but one feature that’s immediately appealing and I’ve not seen elsewhere is the ability to automatically create a circular route that takes in a point. If you want to visit a particular cafe, say, but want to come back by an different route, that’s really handy.

The cycle.travel folks say they were inspired by a perennial question on bike forums: “can I ride along that track on my bike?”.

To answer it, they’ve tapped into community photo project Geograph, which collects photos of every corner of the British Isles.

Cycle.travel’s editor Richard Fairhurst said: “The idea for this came from seeing ‘Can I cycle the C2C on a road bike?’ on a cycling forum for about the tenth time.

“If it was on-road, you could check it out on Google Street View. But that doesn’t cover cycle paths or bridleways. These photos do – and make it really easy to research quiet bike routes away from busy roads.”

Cycle.travel uses OpenStreetMap data, and takes surface type, hills, and National Cycle Network routes into account when planning a route. Other features include:

The site’s cartography also shows cycle path surfaces in three clear styles (tarmac, firm, or muddy), so you know whether you can ride a trail on skinny tyres or whether you need to get out your mountain bike.

Check it out at cycle.travel.