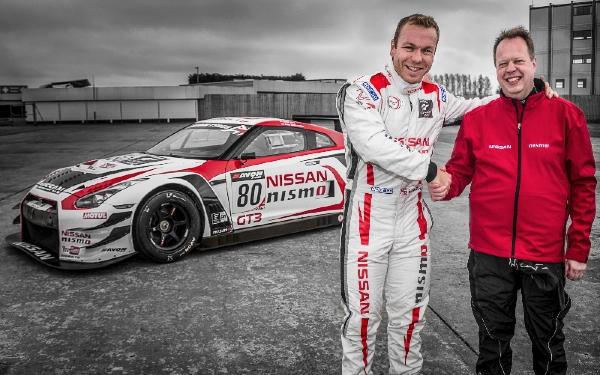 Great Britain’s most successful Olympian, Sir Chris Hoy, has taken another step on a motorsport career that he hopes may one day lead to him racing the 24 Hours of Le Mans with the announcement today that he is driving for Nissan during 2014.

At a press conference at the Nissan Innovation Station at the O2 Arena in Greenwich this afternoon, it was revealed that Hoy has been enrolled on Nissan's Nissan will put Hoy through its advanced driver development programme to fast track his progress into top-level motorpsort -with the goal of racing at Le Mans in 2016. This season, he will race a Nissan GT-R NISMO GT3 car at the British GT Championship.

Hoy sad: “Nissan is already a huge contributor to the British economy with its investment in manufacturing, technology and design – now it is also investing in British sporting success via the Team GB and ParalympicsGB programmes. It’s fantastic for me to be working with Nissan GB on this.

“When we sat down to discuss the relationship, we talked about how we could make things a two-way street. When I learned what had been achieved through Nissan’s Driver Development Programme I was keen to take my enthusiasm for motorsport to the next level.

"This won’t be easy - but I could not turn down the chance to give it a go. My ultimate ambition is to race at Le Mans. That is the dream, but I’m taking this one step at a time.”

Nissan GB Marketing Director, Guillaume Masurel added: “At Nissan, we always do things differently. As Britain’s biggest vehicle manufacturer, we are proud to commit our support for both the British Olympic Association and British Paralympic Association on the road to success in Rio 2016.

"Through our #uniteandexcite campaign we will be giving fans exclusive access to our team of athletes and showcasing their stories and preparation as we count down to Rio 2016.

“Now we can offer another new story, which is a further demonstration of Nissan’s innovative thinking. We will be supporting the new talent and new technology through our partnership with BOA and BPA but in this case the new talent happens to be Britain’s most successful Olympian.

"Sir Chris has already shown that he is a very capable driver and by combining our expertise in driver development, a great car and an experienced team with his natural ability, drive and determination, this will be a fascinating journey.”

Earlier this year, Hoy had been unveiled as a brand ambassador of the Japanese marque that is now Britain’s biggest car maker when it unveiled its partnership with Team GB and Paralympics GB ahead of Rio 2016.

The six-time Olympic gold medallist, who last year raced in the Radical SR1 Cup had already let slip at the weekend about his involvement with Nissan on the track after clinching a podium spot at Silverstone, tweeting:

3rd overall and first in class today at Silverstone in @Eurosaloons event, driving a @Nissan_MSport 370z. What a buzz!

Last month        , Hoy took delivery of a 195mph Nissan GTR – presumably one of the perks of his role as ambassador to the #UniteAndExcite partnership between the company, Team GB and Paralympics GB.

Hoy, who at London 2012 won gold medals in the team sprint and Keirin, has made no secret of his big remaining sporting ambition being to take part in the 24 Hours of Le Mans.

Nissan's director of global motorsports, Darren Cox, said: “This makes perfect sense to us. The Le Mans 24 Hours is the Olympics of motorsport so who better to take on an epic challenge such as this.”