The professional element is that the box includes a marker pen to black out the logos!
by Mat Brett

Castelli has launched a ‘Pro Edition’ of their windproof and water resistant Gabba jersey that’s available exclusively through Wiggle, the professional element being that the box includes a black marker pen. You what? Read on and it'll all make sense...

We must say that the inclusion of the marker pen is a touch of marketing genius, not-so-subtly pointing out that many professionals from teams not sponsored by Castelli have been wearing the Gabba with the logos blacked out in preference to their own team kit. Come on, that's quite funny in a taking the Mickey kind of a way. Well, we thought it was, anyway. Last year’s Milan-San Remo, Ghent-Wevelgem, and Giro d’Italia, for example, were all affected by bad weather and the pelotons were packed with riders wearing Gabbas, lots with the logos covered up so as not to promote a rival brand. If a pro racer is wearing kit from a brand that doesn't sponsor their team, that’s a real coup for the brand involved, and Castelli haven't let the opportunity to publicise it pass.

When Castelli introduced the Gabba jersey – it was first used in the Belgian Cobbled Classics in 2009 – it was one of those ‘why did no one think of that before?’ products. 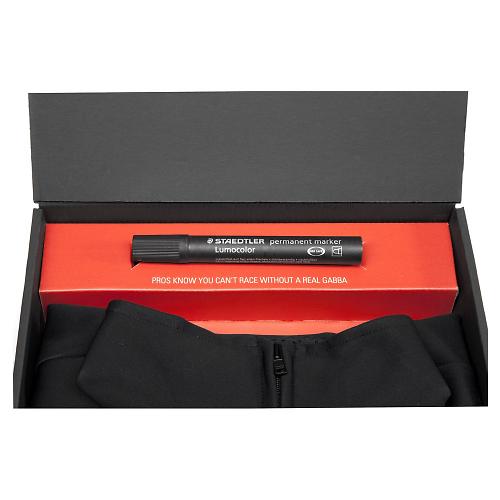 When we reviewed it on road.cc we said: “Windproof and highly water-resistant jersey for performance riders looking for an advantage in changeable conditions.”

Essentially, it’s a short sleeve, stretchy and close-fitting jersey made from a waterproof and breathable fabric. It’s really designed to be worn with Castelli’s water resistant Nanoflex arm warmers.

A Gabba and Nanoflex arm warmers won’t keep out the rain like a full-on waterproof jacket with taped seams but, on the other hand, they’re very breathable and won’t flap around and slow you down like a jacket can; they’re a more aero option. You can also keep the Gabba on all day, doing away with the faff of getting a jacket on and off while in the saddle, and your body temperature won’t be affected by putting on an extra waterproof layer.

The idea came from Cervélo Test Team (as was) rider Gabriel Rasch, hence the Gabba name.

Since Castelli launched the Gabba, many other brands have released jerseys that have clearly been heavily influenced, let’s say, by the design. Castelli puts it more bluntly: “Some other brands have tried to copy it.”

The Gabba Pro Edition jersey is exactly the same as the regular Gabba jersey (£150, www.saddleback.co.uk). What’s different is that it comes in a neat box with a marker pen. Underneath the pen it says, "Pros know you can’t race without a real Gabba."

The lid of the box features "Real quotes from real pros," according to Castelli.

The Gabba Pro Edition is priced at £150, like the regular version. Only 100 are available, and only from Wiggle.