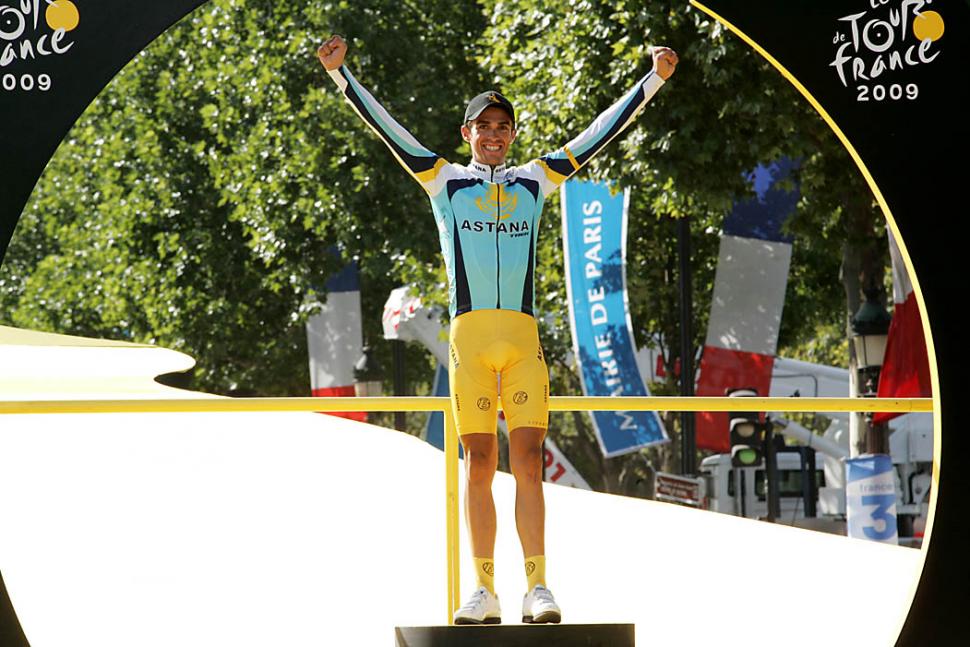 Spanish champ to stay put, so long as Astana get a Pro Tour licence
by Tony Farrelly

Alberto Contador's management team has said that the Spanish Tour de France champion will be staying with Astana to see out the final year of his contract, he won't commit himself to any longer than that, and in the short term if Astana fail to get a Pro Tour licence for 2010 he will leave and look to sign with another team. Contador has also insisted that the team institutes a sytem of internal doping controls – if not he will also leave.

For their part Astana's management have been adamant throughout this protracted saga that they will hold on to their biggest asset for the 2010 season, they are equally adamant that only some small procedural delays stand between them and a full Pro Tour licence for the coming season and it has to be said that all previous predictions of the Kazakh team's imminent impolosion have been wrong– either way we will find out soon.

Earlier today the Kazakhs appeared to put their money where there mouth is when it was announced that the state holding company, Samruk-Kasyna that bankrolls the team was pledging $22m of backing for Astana and that had $3.7m had already been handed over to the agency which pays the team's wages.

In another signal of the Kazakh's intent, Kazakh Cycling Federation deputy president Nikolai Proskurin has been quoted as saying that they are interested in signing Ivan Basso (as reported on road.cc) to team up with Contador for the 2011 season, and that the team had also spoken a number of other big names about joining for the 2011 season.

The chances of Contador staying with Astana seemed to have improved recently when the Spaniard let it be known that he was impressed with Yvon Sanquer the new team manager and Giuseppe Martinelli the sport director. According to Contador's statement it was their guarantee of the seriousness and competitiveness of the new Astana project," that convinced him to stay.

His press statement continued: "In a short space of time they have managed to bring together a group of riders of great quality with which to tackle the sporting challenges of the next season."

"The duration of the contract will be only one year because, apart from being a new project for Astana, Alberto Contador does not wish to renounce the option of making a decision about his longer term future."

And he gave himself an even earlier get out clause too: "The agreement depends on Astana conserving their ProTour licence for 2010 and the introduction of an internal anti-doping programme".

However, if Astana is able to back up its ambitions with the sort of cash that is being talked about, and the sort of personnel, maybe Contador won't want to leave at the end of 2010.