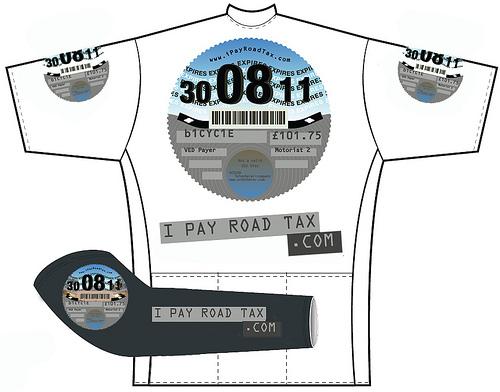 “I pay road tax. Cyclists don’t.” It’s a phrase often trotted out by certain motorists when trying to back up their opinion that bicycles have no business sharing the road with cars.

But it ignores several uncomfortable facts. One, most adult cyclists are motorists themselves. Two, upkeep of highways is funded through general taxation, not road tax, or Vehicle Excise Duty (VED) as it’s properly termed. Not to mention the positive health and environmental effects of cycling.

Now, inspired by a post by a cyclist on the social networking site Twitter, journalist and publisher Carlton Reid is fighting back with the launch of a new website, www.ipayroadtax.com.

Last Friday, Twitter user Nick Bertrand sent a message – or ‘tweet’ – to the site saying, “I pay road tax/VED for the car I rarely drive. Should I wear a copy of the tax disk on my jersey? Would it help?” Carlton replied, telling him “great idea,” before embarking on a bike ride that produced a bit of a eureka moment.

Once back online, Carlton tweeted to say he’d registered the domain name and was going to produce cycling jerseys and arm-warmers with a tax disc motif. The response from other users was almost instantaneous, and within the space of hours, a two-word response to a 27-word tweet had evolved into a nascent business with orders already starting to queue up.

The site is in its infancy – and the jersey shown above a very early mock-up – and Carlton acknowledges that legal niceties may need to be ironed out in using an image of a tax disc on the products.

Items planned may be extended to include the likes of headset spacers, mugs, badges and even a bicycle logo emblazoned tax disc holder, as well as jerseys and arm warmers. The latter, Carlton says, would allow cyclists to point at the tax disc and, as he says, “it’s sure easier than getting a tattoo.”

To register your interest in any of the planned products, you can leave a comment on the site, send an email to iPayRoadTax [at] me.com, or – in keeping with the initiative’s origins – follow the latest developments on Twitter.