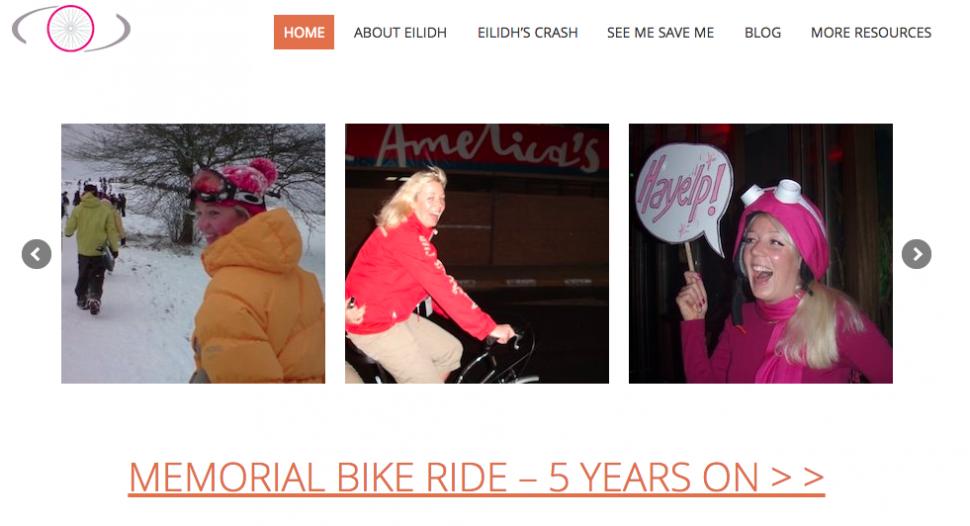 The family and friends of Eilidh Cairns, killed by a lorry as she rode her bike to work in February 2009, are inviting cyclists to join them on a ride in London in her memory today (Wednesday), the fifth anniversary of her death.

The Ride for Eilidh, which will end with a candlelit vigil at the ghost bike commemorating her at the site where she died at Notting Hill Gate, will begin at 7pm at the cafe and bandstand in Parliament Hill Fields.

People attending are asked by See Me Save Me, the campaign set up by Eilidh’s family to lobby to reduce the danger from lorries and now co-ordinated by the charity RoadPeace, to bring candles in a jar and to wear glow sticks, and afterwards there are plans for drinks at Bar 128, Notting Hill Gate.

See Me Save Me says: “Friends and family will retrace Eilidh’s final route, evoking her spirit through a flow of light, and remembering a beautiful, strong, gentle, witty woman, so loved by so many.”

Eilidh, who worked as a TV producer, was aged 30 when she was killed after being struck from behind by a lorry driven by Joao Lopes. The only charge he ever faced in connection with her death was driving with uncorrected defective vision, for which he received three points on his licence and was fined £200.

Even that charge was only brought after Eilidh’s family, who were highly critcial of the police investigation - a Metropolitan Police inquiry acknowledged later that it was inadequate - insisted his eyesight be tested.

They also secured a judicial review into a coroner’s inquest verdict of accidental death, but a high court judge rejected their application.

Three months after Eilidh’s death, Lopes failed an eye test and had his driving licence revoked. It was returned in April 2010, and in June the following year he was involved in a second fatality when the lorry he was driving struck and killed 97-year-old Nora Gutmann as she walked across a pedestrian crossing.

In August 2012, he was jailed for four years after admitting causing death by dangerous driving and separately to 12 months in prison, to run concurrently, for falsifying tacograph information. Lopes told the court he had not been wearing glasses.

At the time, Eilidh’s sister Kate Cairns called for Lopes to be banned from driving for life, saying: “It is clear that the justice system in Eilidh’s case failed to respond properly and Lopes was allowed to carry on driving.

“We need to treat road crime as real crime. We need proper and competent police investigation that is transparent and accountable.

“We need to afford cyclists and pedestrians the protection of the law, just like any citizen.”

Subscribe
See Me Save Me
Joao Lopes
Eilidh Cairns