Aerodynamics play an increasingly important role in the professional peloton, and Scottish clothing company Endura has partnered with Drag2Zero to develop aero racing kit and overshoes for the Movistar team.

Endura was announced as official clothing supplier to Movistar at the beginning of the year, a big deal for the clothing company who previously collaborated with the NetApp team, their first foray into the pro peloton. This partnership with Drag2Zero shows their intent to provide Movistar with the fastest clothing they can possibly produce.

Drag2Zero is a wind tunnel service available to cyclists in Brackley, and is run provided by Simon Smart, an ex-Red Bull Formula One aerodynamicist. His Smart Aero Technology business has been involved with the design of the Scott Foil aero road bike, Giant Trinity and the Scott Plasma 3, plus Enve’s carbon fibre wheels. So he knows a thing or two about aerodynamics. 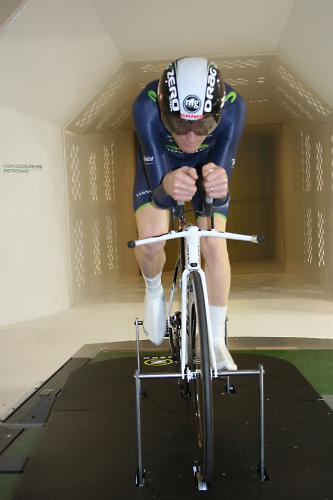 Smart have reportedly been working with Endura for several months already so it perhaps won’t be too long before we see the fruits of their labour. What can we expect? That much hasn’t been revealed just yet, only that they’re developing a “range of aero cycle clothing commencing with the development of aero-suits and overshoes.”

A key part of the design process will be testing and validating in a wind tunnel. “We have been looking at the gains to be made in cycle clothing for a number of years now and have seen in the wind tunnel how using the right fabrics and cut can see big improvements in performance,” says Simon Smart.

“Teaming up with Endura is really exciting for us. They have a fantastic production facility here in the UK which means that between us we have everything we need close by to develop things quickly.  Endura also share our goal of developing products through necessity and giving cyclists what they need.”

Endura’s Jim McFarlane added “We’re very excited at formalising our collaboration with Drag2Zero; Simon is recognised internationally as the leading authority on aerodynamics in cycling and the facility at Brackley is arguably the best in the world. We have been working together for a number of months now and we seem to gel really well. The pairing of the Brackley cycle wind tunnel facility and Simon’s skills and experience in aero with Endura’s in-house ability to prototype and develop product rapidly in response to each set of test results puts us in a really strong position for aero product development.”