Derby's new £27.5m velodrome is in need of a name ahead of its opening later this year 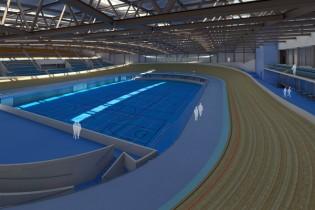 Derby’s new velodrome remains nameless for now - in the hope it can be marketed to potential sponsors.

The £27.5m multi-sports arena, which also includes a 250 metre indoor running track, as well as a cafe, fitness gym, group exercise studios and a spinning studio, and can also be used as a concert venue, has been temporarily named The Arena, so that naming rights could be offered to a sponsor.

Councillor Martin Repton, cabinet member for leisure and culture, told the Derby Telegraph it was a "massive opportunity" but that no firms had come forward as yet.

George Cowcher, chief executive of the Derbyshire, Nottinghamshire and Leicestershire Chambers of Commerce Group, said he also believed it would be "an extremely attractive commercial proposition".

He added: "Interest in cycling in the UK has never been higher following British success in the Olympics and the Tour de France – which starts in the UK this year – and the profile a business would get from being associated with both the sport and one of its leading venues in the UK would be huge.

"The first business to sponsor the arena would benefit the most, because that will be the name which everyone will always associate with the venue.

"There's a reason why major brands like Capital FM and iPro lock themselves into long deals to sponsor venues like the arena in Nottingham or Pride Park Stadium.

"It's because they have strong synergy with the venues they are sponsoring, which brings them national – and even global – exposure."

The velodrome is only a few months from completion, in a site next to the former Pride Park football ground, now known as iPro thanks to corporate sponsorship.

Completion is scheduled for November, with the full opening in January 2015.

Mr Repton said: "We are obviously aware that the centre will be opening in a year's time but we won't rush the (sponsorship) decision.

"We need to look at who's interested and whether it's someone we should be associated with."

As we reported in 2012, the future of the entire project had been thrown into doubt after a change of control at Derby City Council, with Labour, which had been against the plans while in opposition, looking as though it might pull the plug.

A campaign led by local cyclists helped persuade the council to continue its support for the project, however.
In July 2012, Bowmer & Kirkland were appointed to build the complex with Environmental Agency approval for the works on a former landfill site being secured the following month.

Even ahead of the project being given the go-ahead, cycling clubs from Derbyshire and further afield were queueing up to request booking slots on the track.