It's a looker, but it the Colnago Super Singlspeed's beauty more than skin deep?
by Tony Farrelly

There is no doubt that the Colnago Super Singlespeed is an eye-catching bike, a thing of beauty. It's stopped people in their tracks at every cycle show we've been at this autumn, even more or less hidden away on Colnago's stand at Eurobike it drew an appreciative crowd, likewise in Milan and at the London show too, where not only was their one on the Colnago stand, but another on our stand too – where again it pulled 'em in. But bikes are not just for looking at, especially £1400 ones, they're for riding too… 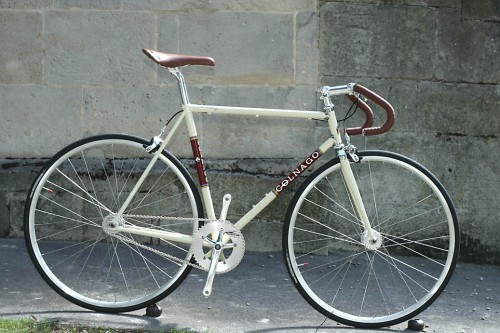 We spent the summer with a production sample of the Super Singlespeed, not quite the finished article that will make it into the shops, but barring a few minor spec changes close enough. According to Colnago the Super is inspired by bikes of the 1980s, at its heart is a lugged steel frame with track geometry. The lugs at the head tube and fork crown are chromed for added head-turning appeal and the paint job is a lovely enamelled cream to complete the overall effect, if you don't like cream it will also be available in black. The tubes on our bike bore no clue, in the way of identifying stickers, as to what they were made from, all we can tell you is that is double butted steel.

Whatever it's made of the frame is a thing of beauty and it's pretty light too, but there were a couple of detail niggles from TR, the team purist, who was a bit miffed that Colnago had built the bike with track geometry but also added cable stops for a rear brake and a bottom bracket shell from a geared bike with cable guides – although the Super is certainly not the only retro steel singlespeed we've seen this year with cable guides on the bottom bracket. 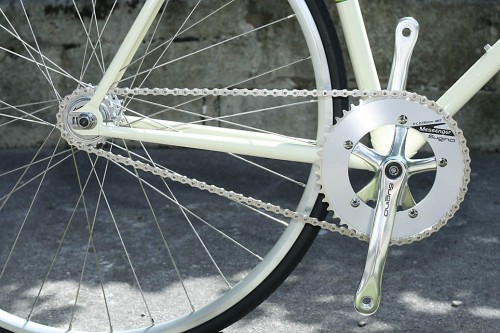 Drivetrain is a 48 tooth Sugino Messenger crankset turning an 18 tooth rear cog on a flip flop hub. It's a good choice, low enough to get up most hills but still with enough top end to let you crank along the flat. Brakes are Tektro with Tektro levers – we had no problem with the levers they're on a lot of fixed bikes and, according to TR, they are popular with the fixie crowd. Stopping power though did leave something to be desired although a simple change of pads from the rock hard set on our bike would work wonders in sorting that out. 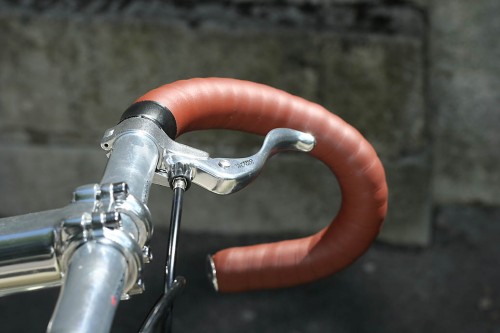 The handlebars are track drops which means that there is only a very small straight bit of bar before they bend forward and down in the drop – and there isn't too much real estate on offer for lights and the like although I got a Cateye commuter light on there no problem, and it's got to be said that the most likely buyers are unlikely to want to rig up a set of Light and Motion Stellas, plus computer, and GPS. The drops are very compact though and if you've got big hands, like TR, you might find them uncomfortable TR said that his hands were always grabbing a curved part of the bar. That shorter track geometry also means that if you do ride in the drops the position is more tucked up than the stretched out one you'd get on a road bike. Oh, and you need to remember that you can't grab the brakes when you're in the hooks too… that's quite important. All that is topped with another Eighties touch a copy of a Selle San Marco Regal saddle – given that the original is now back in production we'd question why Colnago didn't spec the bike with one, that said the saddle was very comfortable and the faux brown leather matched the brown leatherette bar tape well.

So far so good, the one thing we haven't mentioned though is the wheels and they are a let down. Unbranded hubs which didn't run smoothly (okay our bike was a pre-production sample) laced onto some fairly generic aero rims and shod with Vittoria's Zaffiro Pro tyres. This is more like the wheelset you would expect to find a £500 bike not one costing almost three times as much.

The whole lot weighs a respectable 8.8Kg (19.4lb) and there would be considerable scope for dropping some weight off that with a lighter set of wheels. The good news here is that despite what the Colnago website says the Super will be available as a frameset from January (price tbc) so the option is there to build something up yourself with better wheels. 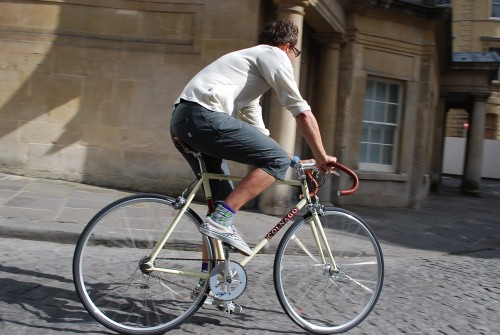 The first thing to say about the riding experience is that those looks exert their power outside the show hall too, riding the Super Singlespeed you soon get used to turning heads and appreciative comments about your steed, only one other bike I've ridden has provoked a similar reaction – the Charge Plug Grinder.

The second thing to say is that there was plenty of toe clip overlap on our 54cm bike it's what you expect from a track bike, but annoying when going slowly threading your way through traffic. That track geometry also makes for a short and upright position, that combined with those compact bars means you steer the bike by leaning rather than turning the bars – as you would on the track then.

That steel frame may be a light one, but none of that steel zing translates into the ride which is sturdy and sure-footed, rather than nimble and the seat tube transmitted all of the bumps up through the saddle although oddly both TR and I agreed that it wasn't an uncomfortable bike – “it felt a lot like a Charge Plug but with track geometry” was TR's verdict and I'd have to agree.

That's quite a trick when you consider that the Plug is a good 5lbs heavier. However this is a Colnago, and it's getting on for three times the price of a Plug so we'd expect more it doesn't live up to what you'd expect from a bike with a Colnago headbadge or indeed this price tag. In short as it stands the ride doesn't match the looks.

Most of the things that are wrong with the ride can be blamed on those wheels a set that matched the quality of the frame would have a transforming effect… as would switching to a road bike geometry. Of course the latter is harder to do when you've already built the frames and there's no denying that there are plenty of people out there who like to ride track bikes on the road.

In many ways we'd say Colnago have missed a trick with the Super, why build a new steel frame with classic track geometry when they already produce a classic steel bike, the Master, with a legendary reputation for ride quality and handling, surely it would have been simpler to produce a version of that with horizontal dropouts, indeed it turns out the Colnago are now producing a Master with horizontal dropouts. Okay a Master frameset is a couple of hundred quid more than the Super as a complete bike but you are buying something truly light, and special - they still make them by hand under Ernesto Colnago's house.

The route Colnago could have taken with the Super would have been to turn it into a super-stylish singlespeed commuter by adding eyelets for a rack and guards, yes this is an expensive bike, but there are plenty of people who wouldn't regard it as that expensive even to commute on – it if were more commuter friendly.

As it stands the Super Singlespeed is a thing of beauty, but it's more for hanging on he wall and admiring rather than for the joy of riding. It will be available in the UK in November and will cost £1399.99 as we mentioned above it will also be available over here from January as a frameset too – which would be the route we'd choose because it's a frame that could definitely be built up in to a pretty cool and distinctive machine.

To find out more visit the Windwave, Colnago's UK distributor's, website or check out www.colnago.com