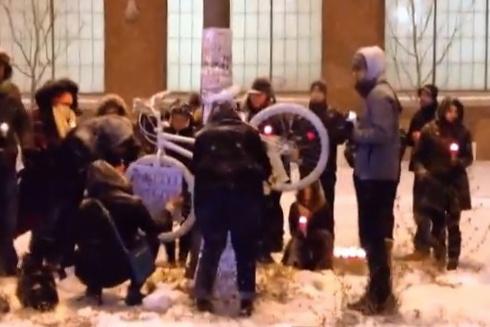 The family and friends of cyclist who died in the early hours of Saturday morning following a collision with a van being driven by a motorist who was over the drink-drive limit has turned to a crowdfunding website to raise money to pay for his funeral.

Hector Avalos, aged 28, a former US marine who was studying to be a chef, was riding home from his work as a cook at the El Hefe restaurant in the River North district neighbourhood of Chicago when he was struck by the van shortly before midnight on Friday evening.

He was taken to Mount Sinai hospital but was pronounced dead at 38 minutes after midnight on Saturday morning, reports DNAinfo Chicago.

In an appeal on the crowdfunding website, Give Forward, his family and friends are seeking to raise $6,000 to pay for his funeral expenses and have currently reached two thirds of their target. Their post reads:

Hector Avalos was a loving Son, Brother, Friend, Teacher and Marine. Please help support his family during this time.

Hector Avalos, 28, was taken from us too soon. Hector lived his life exactly as he wanted to. Hector spoke his mind and lived with his heart. He enjoyed learning--and teaching.

His passion was only matched by his generosity. A lover of nature, Hector did everything he could to be environmentally conscious by composting, recycling, repurposing and most of all, riding his bicycle.

On December 7, 2013, Hector was struck by a driver on his way home from work near the intersection of Ogden and Rockwell on Chicago’s West Side (Douglas Park) while riding his bicycle.

His family and friends have many memories to keep his legacy alive. We are graciously asking donations for funeral expenses.

Paypal contributions could be sent to: cvalen4@gmail.com

According to DNAinfo Chicago, the motorist involved in the fatal collision, hospital administrator Robert Vais, approached police officers at the scene and told them: "I was the driver of that van over there. I hit him. Is he OK?"

Vais, aged 54, was breathalysed and has been charged with offences including driving under the influence, with prosecutors reporting that his blood alcohol content was .118, which is more than the legal limit of .08.

Following a court hearing yesterday, the victim’s mother, Ingrid Cossio, said: “I thought there was going to be no bond,” she said. “He’s a person who killed someone else… Why would you let him out?”

She added that her son rode his bike everywhere, but a colleague at the restaurant where Avalos worked revealed that he’d thought about not riding home on Friday evening.

“He was saying he really didn’t want to ride his bike,” said Jesus Vargas. “He wanted to take the train… He kind of thought about it for a minute, and then he decided to take his bike.”

The following video of a ghost bike memorial to Avalos being put up at the site where the fatal crash happened was posted to YouTube yesterday.