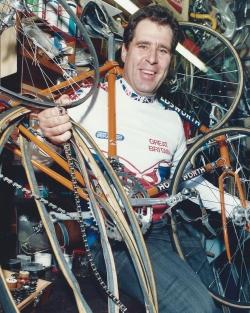 The British Cycling and Team GB mechanic Geoff Shergold's cortege rolled to his funeral at Southampton Crematorium amid a peloton made up of cyclists from clubs around the country yesterday.

There was not room at the service for all those who wanted to attend, and many waited outside.

Geoff, who came from Southampton, was a regular on the south of England cyclo-cross scene for more than 40 years, and died from kidney cancer last month aged 64, still chairman of the Wessex Cyclo-Cross Association.

Martin Balk, 54, secretary of the New Forest Cycling Club, first met Mr Shergold in the 1970s and has previously raced against him.

He told the Southampton Daily Echo: “He was a larger than life character who loved cycling and did so much for the sport.

“He was a top mechanic, team manager and a great rider in his day.

“I raced against him and he always beat me.

“He was very friendly, always had plenty to say and was always a great speaker at cycling club dinners.”

Old friend Gary Evans said: “He was big guy, about 6ft 2ins but also a massive personality as well. In cycling terms he was one of the big names.”

The presiding minister read a quote from William Golding: “The journey of life is like a man riding a bicycle. We know he got on the bicycle and started to move. We know that at some point he will stop and get off. We know that if he stops moving and does not get off he will fall off”.

In a sad addendum, Geoff’s partner Sue Galton, who was too unwell to attend his funeral. died last night.

Geoff was chairman of the Wessex Cyclo-Cross Association and a stalwart of the cyclo-cross scene in the South of England for over 40 years. A useful cyclo-cross rider, In 1976 he gained selection to the British team contesting that year’s World Cyclo-Cross Championships in the possibly unique position of “travelling reserve and mechanic”.

As an international rider he never progressed beyond reserve but his career as a mechanic blossomed, taking in most of the cycling disciplines, including countless track and road events. In 1979 he accompanied then GB Team Manager Jim Hendry on the gruelling Peace Race in Eastern Europe, one of many major events which fuelled the endless supply of fascinating cycling stories and tales for which Geoff became justly famous.

But it is for his connections with cyclo-cross and disability sport that Geoff will be most remembered. He served as chief mechanic for an unbroken spell of 30 consecutive World Cyclo-Cross Championships until stepping down in 2008. He also worked tirelessly as a mechanic for disability cycling long before this aspect of cycling had the high profile which it enjoys today, and worked as team manager to the cycling squad at the 2000 Paralympics in Sydney.

Geoff made hundreds of friends both inside and outside cycling and will be sorely missed.